Circus in Montréal; Highlights of The International Market of Contemporary Circus-2018 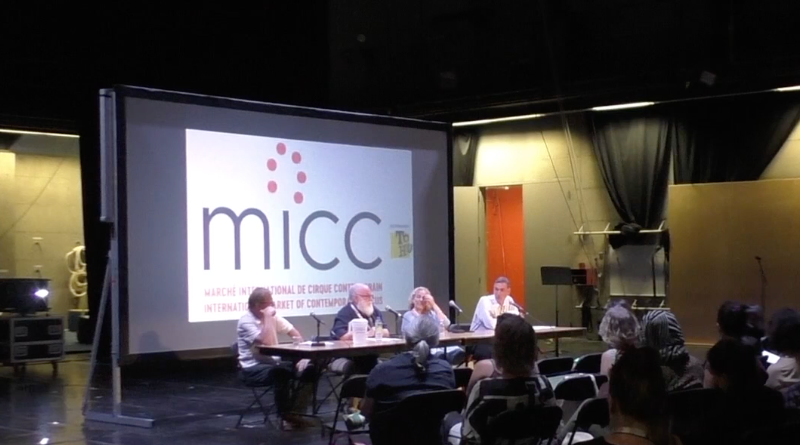 CircusTalk was recently in Montréal–the circus hub of North America, reporting on the 9th annual Montréal Complètement Cirque Festival (MCC). The 11 day festival ran concurrent with the International Market of Contemporary Circus (MICC). While MCC is an all day contemporary circus festival full of indoor and outdoor programming that includes regional and international shows, the professional side of the conference (MICC) is organized around it as an opportunity for circus pros and programmers to come together to form connections and to develop industry standards.

We started our festival experience this year with the exciting energy of the outdoor show Phenix, directed by Anthony Venisse, who has directed the large scale outdoor show and Les Minutes since the beginning of Montréal Completement Cirque in 2010. The show was performed by local circus students with two shows on all but one night of the festival. Phenix was full of acrobatics, some juggling, Cyr wheel and group dance, as well as frenetic aerial work on silks that was quite stunning in an outdoor setting.

Next morning, it was off to the beautiful, round circus venue Tohu, where we attended a casting event for the Montréal big three circus companies, Cirque Eloize, Cirque du Soleil and 7 Fingers. In addition to the casting directors, about 23 programers were present to see a curated mix of a dozen or so hopeful artists performing a variety of acts, including hand-to-hand, hand balancing, straps, lyra, and trapeze.

After the audition, everyone scooted across town to the new 7 Fingers Creation & Production Center for the unveiling of their new structure, which was completely redesigned for the company’s diverse needs. The headquarters now has a place for the administrative, the directorial and the performing side to converge in meeting rooms, in board rooms, in quiet corners, over meals in the dining room and most importantly to create in their own space–in  the 3 well-equipped studios (creation, training and dance). This space was created with the support of many individuals and organizations, among them not the least Guy Laliberte–who donated over a million dollars. There were also numerous grants from the city, regional and national government. The mission is to expand their work with a foundation that offers creative residencies, artist mentoring, workshops, classes and symposiums. Perhaps the best part of the tour was having a brief glimpse in to the creation studio where circus artists were exploring a new apparatus, something the administrative staff admits it is excited about too, since previous headquarters were far away from rehearsal spaces.

Next, MICC couldn’t launch officially without a cocktail party, which was preceded by a panel discussion hosted by Yohann Floch (president of the Fresh Arts Coalition Europe) on the concept of collective creation. Members of Cirque Alfonse, Gravity & Other Myths, La Marche du Crabe and a 7 Fingers Founder were present to discuss their diverse experience with being part of a collective and creating within one.

The following day, the MICC was invited to Concordia to visit Dr. Patrick Leroux’s circus research seminar. This year the theme was experiential learning in contemporary circus. He invited a group of  22 graduate students from 10 different countries with a wide variety of backgrounds in performing arts to participate. The students had a packed agenda, which included not just seeing the festival shows and discussing them, but also observing practical projects made with a group of ENC (Ecole national du Cirque) students, as well as creating and presenting their own research projects and writing about the overall experience. The graduate students even attended some of the workshops offered by MICC. We joined the group to view the works-in-progress of ENC students and the three directors Claudel Doucet, Jessie Dryden and Michael Watts. After the presentations of research, there was a panel discussion, notably comprised of all female academics (Geneviève Dupéré, Jessica Kendall, Alisan Funk, Dana Dugan, and Marie-Eve Skelling Desmueles), which started with the question “What is circus research to you?” Answers varied, but an interesting follow-up questions posed by an audience member was, “Is the discipline of circus becoming more commodified or more diversified?” The whole panel seemed to agree that the truth was that both things were happening and that one benefit of circus research is that it is helping to create more space to welcome a diversity of work.

On Wednesday at the ENC, there was a tête-à-tête session, where companies pitched their work face-to-face with MICC programmers, followed by a tour de piste session where 11 of the 45 applicants were selected to do a visual and spoken presentation of their show to programmers. There was a real mix of show genres this year– with some geared towards a young audience, some seeking a high end arts audience and others more entertainment- based and large scale, with a few small scale physical theater shows as well.

During the week, several workshops about the touring industry were organized by MICC. We attended a workshop about how to Tour in America and also made it to an excerpted showing of Cirque Antique’s Bang Bang, a new show based in the 1920’s in a bordello, with an all female cast and an exploration of gender roles and sexual orientation.

One of the most anticipated MICC events is the Lunch Pro session where the attendees all gather outside at Tohu to have a picnic lunch and to strengthen their business ties. This year, it was a beautiful day with ample time for conversations before heading off to the tours of Tohu, ENC and Cirque du Soleil.

In the evening, it was time to check out the new work-in-progress from Cirque Eloize, Hotel. We got to see an excerpt of this promising show which explores life in a hotel lobby, something founder Jeannot Painchaud explained was a topic every circus performer knew a lot about–especially in Cirque Eloize, where they have collectively experienced 130,000 hotel stays since their beginning 25 years ago. The production is in its 3rd week of rehearsals, but the plan is to premier it on August 22nd in Foxwood Casino in Connecticut before beginning the official tour.

The schedule for MICC attendees was full. After attending the venued and outdoor shows, and enjoying a little social time in the evenings at the new wildly popular outdoor terrace bar on St. Denis, the experience was certainly complete. But the true highlight and purpose of the market and conferences is the MCC festival itself, which offered us 7 venued shows, one off festival show, and even an unofficial off off festival apartment show, not to mention innovative and talented outdoor acts around the city for all 11 days of the festival. For a circus professional looking for inspiration, talent, engagement and connection with their community, this was an important opportunity to see how Québec fits in to the international circus scene and to program some shows.