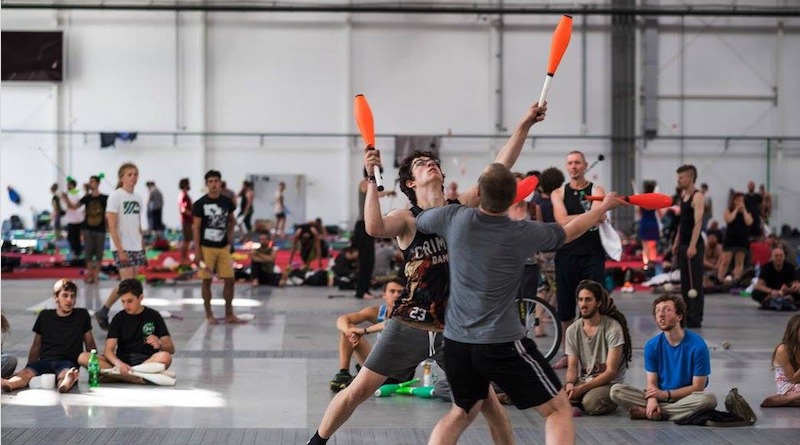 The European Juggling Convention (EJC) is one of the most revered annual juggling events in the world. Now in its 42nd year, it has rotated its way across Europe each year attracting thousands of hobbyists, professional jugglers and circus artists to its unique blend of workshops, shows, events and competitions for a nine day camping experience. It doesn’t lure just jugglers, but rather a whole microcosm of circus (hula hoopers, flow artists, aerialists and unicyclists among them.)This inclusive environment welcomes people of all ages and skill levels. This year it will land in Newark Showgrounds in England where it is expected to draw its most diverse crowd yet.

But what events are not to be missed? How can you assure yourself a good experience there? How can an army of juggling volunteers coordinate these opportunities for the thousands of jugglers and circus folk who stream in for the nine day event that runs from August 3rd until the 11th?

I asked Deirdre Toher, a veteran of EJC, what her advice would be for newbies (I’ll be one of those this year.) Toher, writer of a thorough EJC ‘What to Pack’ list that has stood the test of time, and volunteer coordinator of multiple EJC’s over the years, had practical advice, and a good explanation for her packing list, “Many people who attend their first EJC have never been to a camping event of the same length, so you require a little more comfort than at a music festival [I had done many years in the scouts, so my first EJC wasn’t that much of a shock].”

As an eternal volunteer herself, Toher advises on the cure of being a newbie at EJC, “For those traveling alone, who don’t know many people at the festival, I highly recommend volunteering as a way of making great friendships! For those with a bunch of friends at the EJC, volunteering gives a great insight into how the thing works, and why things are done in a specific way!”

Toher goes on to advise folks who don’t know too many people at EJC to check in with one’s countrymen (easy to locate due to flags marking their encampments), many of whom will organize a picnic lunch or dinner outting for people associated from their region. She points out that the Irish jugglers are particularly friendly and chatty.

After speaking to Toher, I checked in with Convention organizer Jane Randall for a quick talk before she had to hustle off and arrange more EJC happenings.

Kim Campbell: How did you came to be in charge of arranging such a big event? 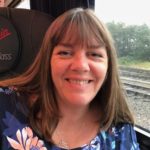 KC: How old is EJC and how many EJCs have you attended over the years?

KC: In your opinion, what is the unmissable event at this EJC?

JR: I love going to see Fight Night, but for 2019 there are going to be so many fantastic shows and artists on site that there are too many to single one out. The parade I hope will be special – we have all sorts going to be in it including some amazing almost life size puppet elephants.

KC: How many portapotties will you be renting for this?

JR: Well, the amazing fact about our venue is that we don’t need to rent any because there are so many permanent toilets there already! At last count, I think it was over 100.

KC: How many tents do you rent?

JR: Quite a few despite having some great indoor spaces– we are hiring one huge big top, one medium sized and seven or eight smaller ones.

KC: What kind of vendors come to EJC? How will people eat?

JR: This year the venue are providing several food outlets, but we are also having a great vegan/vegetarian stall that is a stalwart of the British Convention scene since 2007. There will be a pizza man, baked potato stall and several other options too.

The venue for EJC 2019 is not really near to the town or shops, so we are having our own small shop on site. We will be supplying the basics for those who want to cook their own meals. There will be an area of covered seating near the food stalls and the bar, which everyone can use. The will be sinks next to it too for people to wash up their pots. There will also be three other washing up/small self-cooking areas around the camp site for those who would like to be self-sufficient.

KC: What is the most surprising thing about organising an event of this size?

JR: That things always cost more money than you think and there is always something more to do!

KC: What does camping bring to the experience?

JR: As mentioned earlier, the site is not close to the town, so camping means that you are right here in the midst of the convention, you don’t have to travel far to find your bed. I know camping isn’t for everyone, it helps if you have a good airbed, decent pillow and sleeping bag. Oh, and ear plugs.

KC: How many volunteers does it take?

JR: Many! Many, many volunteers. The actual pre-event stuff is down to about ten people but at the event we are up to about 180 people and counting.

KC: How many days does it take to set up the space and who cleans it up afterward?

JR: We have four days to set up and two and half to take down. We have to clean up, so would really appreciate it if people clear up their stuff and take it home with them!

KC: Who shows up at EJC and why?

JR: A mixture of people – from the dedicated ‘spend 12 hours in the gym jugglers’, to the families who want a different holiday experience.

JR: It hasn’t improved mine –but that is because I spend about twenty minutes juggling and the rest of the time talking.

KC: There are a lot of traditions at EJC, like the parade. What is the most popular tradition?

JR: The parade is a popular one, the games, fight night, gala show, we will have to wait and see.

KC: On the website, you talk about the concept of ‘Jugglers for jugglers’ What does this mean to the group?

JR: It means everyone helps, everyone enjoys. The event is for you, whether you work a thousand hours or just ten minutes, if you are being paid to work there or if you paid the supporter, or the concession ticket price. EJC is inclusive.

KC: I’ve noticed juggling conventions often offer acrobatics and aerial instruction too and EJC is no exception. In fact you have a big top set aside for it. In your experience, are many jugglers crossover artists who do other circus disciplines or is it a complimentary ‘spousal convention’ activity?

JR: These other skills are becoming just as important a draw to the EJC as juggling. We have more than just a big top — we have a whole building and several outdoor rigs too. I think that aerial is a big thing at the moment and we need to cater for those who want to learn more.

KC: Is there any specific convention -based unique or interesting language that crops up around the convention setting?

JR: There are some random things that people say – often when waiting for shows to start – like ‘Pirouette’ when shouted out indicates to people that they are expected to stand and turn 360 and sit back down. Some others come out at a specific incident — often in Renegades the audience might shout ‘Do it naked!’ or ‘It cant be done!’

KC: Tell us something that might surprise us about EJC.

JR: It costs almost half a million pounds to run even this event which in EJC terms is not a big one.

So this summer, if you want to work on your circus and juggling skills, visit the showgrounds of Newark in the center of Great Britain, not too far from Sherwood Forest, where you can join thousands of people camping, juggling and exploring the circus arts together, sharing skills and food and good fun. If you can’t make it, visit CircusTalk News and social media from August 8-11th for coverage because I’ll be there for the last week to report on the happenings.