How Was Circus Culture Accepted in to the National Inventory of Living Heritage in Finland? 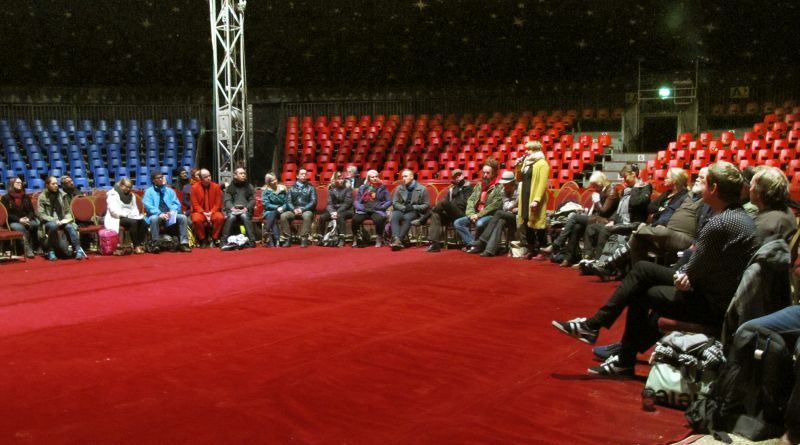 Finland is the third country in Europe, where circus has been accepted in to the National Inventory of the UNESCO Convention for the Safeguarding of the Intangible Cultural Heritage. CircusInfo Finland presented the case together with Finland’s largest classical circus, Sirkus Finlandia, at the circus organisations’ conference during the Monte Carlo International Circus Festival on January 19th, 2018. The two Finnish organisations shared their experience of the project with the circuses gathered at the meetings of the Federation Mondiale du Cirque and the European Circus Association.

The convention for the Safeguarding of the Intangible Cultural Heritage was adopted by UNESCO in 2003. It includes creating an inventory of intangible cultural heritage at the national and international levels. Performing arts are included in the convention among many other forms of immaterial culture. (Note: Intangible cultural heritage is defined here as the living heritage which is present in people’s everyday lives, encompassing all forms of human activity. For example, it can be knowledge and skills relating to oral traditions, performing arts, festivities and practices, crafts, or nature and the universe. These can then take form of objects, different forms of expression, or even food and games.) The dynamic circus community in Finland took an active role when the collecting for the National Inventory started in Finland and proposed to add circus culture to the list. The process all-in-all resulted in positive outcome, which not only strengthened co-operation between the circus organisations involved but also increased the camaraderie and  the overall spirit of the convention.

Finland ratified UNESCO’s Convention for the Safeguarding of the Intangible Cultural Heritage in 2013. The Finnish Heritage Agency is responsible for its’ realization in Finland. The project is carried out in Finland in a very easy accessible and inclusive way. First, a Wiki-inventory for Living Heritage was opened in 2016 to enable communities and groups to present their own intangible cultural heritage. To date, 130 articles have been published in the Wiki-inventory. Elements from the Wiki-inventory can be proposed to the national inventory. The communities make the proposals and write the presentations of their own heritage, but the Ministry of Education and Culture decides on the National Inventory as well as on the possible proposals made for UNESCO’s international lists.

The Ministry of Education and Culture opened the National Inventory of Living Heritage and nominated 52 elements for inclusion in it on November 23, 2017. Besides circus culture the tradition of Finnish funfairs was included in the first round.

The strength of the application of circus culture lay in the large circus community behind the proposal. Altogether 20 circus organisations, amongst them contemporary circus companies, touring classical circuses, educational institutions, youth circus schools as well as umbrella organisations, joined forces behind the proposal. Many more artists and circus enthusiasts also participated in a national seminar which started the process in 2016. This seminar was hosted by Sirkus Finlandia and it was a joint venture of CircusInfo Finland, Sirkus Finlandia and the Finnish Arts Promotion Centre. The Finnish Heritage Agency also participated and supported the event. Following the seminar, a full-day workshop was organized, where presentations of the Finnish circus culture were discussed.

Finland is now the third country in Europe, where circus arts has been taken to the National Inventory of the UNESCO Convention. The other countries are The Netherlands (2013) and Hungary (2016).  A country which has ratified the convention and created its’ national inventory, can propose one element a year to the Unesco’s international lists. Another possibility to get to the international list is a multinational proposal.

Federation Mondiale du Cirque is encouraging all circuses to start a similar process to get circus to the National Inventory in their respective countries. Circus as an international art form with strong networks has good potential to form a multinational proposal to UNESCO’s international list in the future. Many circuses participating in the conference commented afterwards that they were interested in following the example of Finland, Hungary and the Netherlands.

The process can bring the circus people in each country to sit around the same table and to share their thoughts and visions of the future of the art form. Besides the visibility the campaign brings to circus overall, this type of communal project can benefit the circus field in numerous ways. When the outcome of the project supports internal communication and understanding between all professionals in the field and strengthens the self-respect of the artists, it a step worth taking.

Further reading suggestions:
Read how circus culture is described in the Finnish National Inventory
Read Kim Campbell’s article of the Finnish circus field and the CircusInfo Finland on Circus Talk