In the Ring with 27 Wild Animals 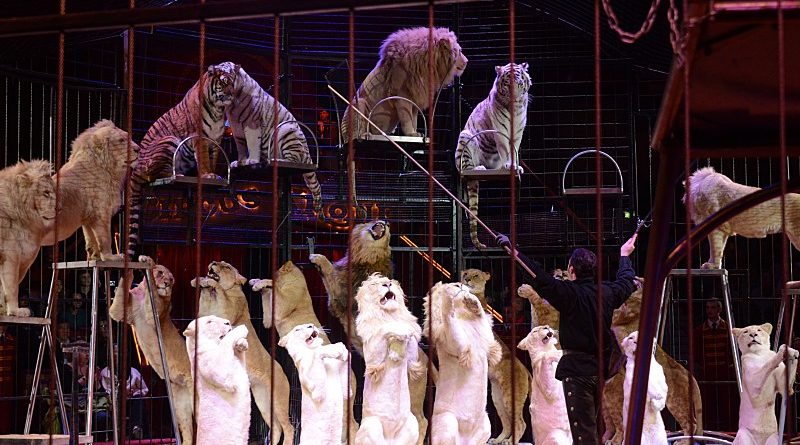 With his new act, Martin Lacey, Jr. wants to break a world record.

In Europe, January is traditionally the month of circus festivals. The festivals in Monte Carlo, Massy, and Paris are three of the most prestigious festivals, but this January another event electrified the circus scene in Europe and beyond: in Munich’s Circus Krone building, Golden Clown winner Martin Lacey, Jr. presented his new cage act.

Lacey’s aim is to present the world’s largest wild animal group ever. To achieve this goal, he needs 27 animals in the ring. Currently he is working with 23 lions—white and normal colored ones—and three tigers in one ring. Even though one animal is still missing for the world record, this new act is already an incomparable spectacle. Lacey doesn’t just rely on the size of his group to impress; he also presents a lot of difficult tricks with his animals, all of which were born under Lacey’s custody. “At the beginning of the performance, a male lion named Baluga, who shows off a large mane, comes into the ring along with three tigers. One of the tigers jumps over two of his companions; then two tigers put themselves up on their animal partners by placing their front paws on their partners’ backs. After this prologue, the cage gets filled with the entire 26-member predator pack. Half of the animals build a pyramid on the pedestals in the back of the cage, seven brown lions get up on the bars of the cage, and seven white lions are animated at the same time to sit high. This creates a great display with all the animals. Many more tricks follow: four lions lie between platforms, while five other lions jump along the cage and across these platforms. Twenty animals form themselves into two large ‘carpets.’

“In the midst of all the animals on their pedestals, Lacey daringly parries the wild feint of a male lion. He lies down on the ground and gets covered up by four animals. A lion lays his front paws on Lacey’s shoulders. This trick is followed by two tigers walking forward on their hind legs. Two lions even jump over Lacey, and before they leave the cage at the very end of the act, Lacey lies down on the large-maned lion Baluga. Finally, he is alone again in the cage, bathed in sweat. The audience jumped out of their seats. Giant applause. Giant jubilation.”

Laceys new act is also remarkable because as circuses have come under increasingly extreme pressure from animal activists, who want to ban wild animals from the circus ring, it has seemed that acts with such a large number of animals would be relegated to the past. But fortunately Lacey is able to prove with his new act that the circus with wild animals is still alive.

For years Lacey and his older brother Alexander Lacey, who is performing in Ringling these days, have fought on the front line against activists’ attempts to ban wild animals from circus. As part of their campaign, they have constantly improved the way they keep their animals. Lacey’s animals, for example, live in huge facilities outside the circus tent. He invites the audience to his rehearsals on a regular basis, so that they can see for themselves that animal training is not based on cruelty, but rather on trust and positive reinforcement. Many organizations, including the European Circus Association, a union of animal trainers, and a private group of circus fans called Animals Belong to the Circus, support Lacey and other animal trainers who treat their four-legged protégés in the best possible way.

Those who are curious about Martin Lacey’s new act have two upcoming chances to see it live. First, Lacey is performing in the second winter program of Circus Krone in its circus building in Munich through the end of February. Second, Lacey’s new achievement will be part of Krone’s upcoming summer tour, which will lead Europe’s biggest circus through many German towns. CircusZeitung is a monthly print magazine about circus, variety, and beyond. It features reviews, portraits, and news. Its focus lies on the German-speaking countries Germany, Austria, and Switzerland, but it also has a regular view on the rest of Europe and overseas. The CircusZeitung is published by  the Gesellschaft der Cirsfreunde and produced by the Circus Veg/Planet Circus. Journalist, Photographer, Webdesigner -Germany
Sven Rindfleisch has been a circus enthusiast since he was a kid. As an adult, he is the chief editor of the German CircusZeitung. Before that, he founded and created Chapiteau.de, the leading online magazine for circus and variety in Europe. As a professional journalist, he has worked for several daily newspapers, including, among others, the Wiesbadener Kurier. He lives in Wiesbaden, Germany.
Sven's profile
You are about to enter a members-only zone.
To share this article on your CircusTalk member page and connect with circus professionals from all over the world, sign up now. It's free!
Sign Up
Already have an account?
Log in

Sven Rindfleisch has been a circus enthusiast since he was a kid. As an adult, he is the chief editor of the German CircusZeitung. Before that, he founded and created Chapiteau.de, the leading online magazine for circus and variety in Europe. As a professional journalist, he has worked for several daily newspapers, including, among others, the Wiesbadener Kurier. He lives in Wiesbaden, Germany.

CircusTalk would like to congratulate Menno van Dyke on his recent promotion to Artistic Director of the Circusstad Festival. Starting…

May 6, 2021 CircusTalkComments Off on The Circus Arts – Engine Of A Fresh, New Beginning
CircusTalk Blog News and Events