Is Australia the Next Circus Superpower? 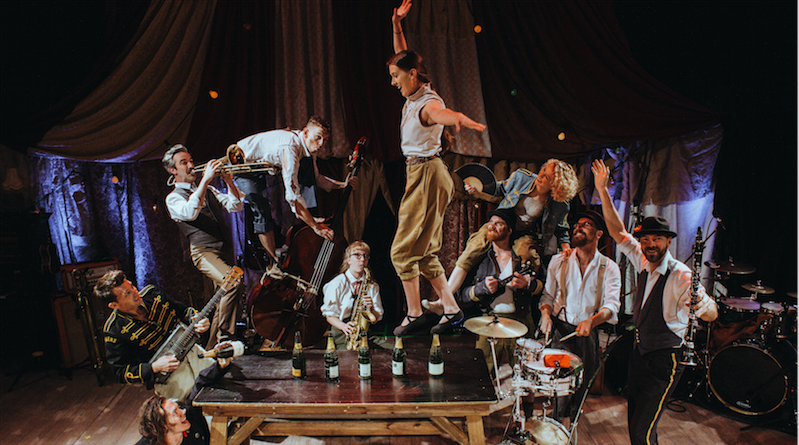 The mayor of Montréal opened the 2018 Montréal Completement Cirque Festival with a speech that lauded the city as “la capitale mondiale du cirque” –the world capital of circus.

The world capital. A rousing sentiment for sure, but it gave me pause. Perhaps it’s true right now, but will Montréal hold this title forever? Or is another rising superpower waiting in the wings to usurp the empire? Just biding its time, gathering its forces until the time is right to flex some muscle and take its rightful place as the jewel in the crown of the international circus scene?

I’m talking, of course, about Australia.

Think about it. Australia has nearly everything Montréal has; an elite circus-specific training institution, a busy eco-system of companies, freelancers and youth circus organizations. It has a growing audience hungry for new work and proud of what their local companies bring to the table. The bigger companies are the stars of the international festival circuit, and now audiences worldwide are beginning to understand what Australian circus stands for.

So what is that, exactly? What is Australian-style circus?

When I asked circus colleagues here in North America what springs to mind when someone says “Australian-style circus” a few common themes came up:

Two minutes after the mayor’s speech, the curtain went up on a show that had all of these qualities in spades:Backbone by acclaimed Australian company Gravity & Other Myths (GOM).

Backbone showed none of the trappings of Cirque du Soleil-stylenouveau cirque – no lycra, no visible makeup and almost no equipment. Instead, what we saw was stripped-back, raw, sexy circus; rough around the edges but real and very moving.

“Honest” is how Jascha Boyce, company member of GOM, puts it. She thinks the hallmark of Australian circus is being real onstage.

“We’ve always used humour a lot because that’s how we relate to each other… we do kind of act like a family and we have a very healthy competition and that becomes part of the show.”

Backbone is spare on props and equipment; the company instead uses rocks and soil as theatrical devices. For every international show the company books, they send a container load of rocks and dirt from their home base in Adelaide.

“Talk about salt of the earth,” I say to Boyce. “Is it literally Australian dirt?”

She nods. “We’ve got a few sets of them, which does seem a bit ridiculous, you know, shipping them from place to place.”

I ask her to try to characterize Australian circus in a nutshell.

“There’s something about Australian circus that’s a bit grungy still. Something that’s very common in Australian circus is the level of push that the artists have. There’s this idea of working as hard as you possibly can, even if that means you might fail.”

Another Australian company, Company 2, joined GOM as a headline act in this year’s Montréal Completement Cirque.

A co-presentation with Just For Laughs (aptly so), Company 2’s show Scotch and Soda is a raucous bar brawl of a show: funny, inventive and daring. It gives equal footing to the music — a runaway brass band — and the performance aspects, and the end effect is loaded with charm. Seeing it felt like watching that moment inTitanic where Rose goes below deck and finds the steerage class is having way more fun than the uptight squares upstairs.

People often talk about “life-changing” theatre, usually in relation to an important show that was like a religious epiphany, theatre that changed the way they see the world. This is notthat, not exactly. Rather,Scotch & Soda, andBackbone, and all the other Australian circus shows I’ve seen over the last five years, have changed the way Ibehave in the world, at least temporarily.Scotch & Soda had a palpable effect on me for days after. There was a swagger in my walk that wasn’t there before. I laughed more easily. I spoke up in meetings more often. Perhaps this is the kind of work the world needs right now: circus that inspires action, courage and confidence, not just awe.

David Carberry is co-founder and director of Company 2. His co-founder and life partner Chelsea McGuffin met when they were both in Circa, a well-known circus company also based in Brisbane. They set up Company 2 in 2009 and created a hit show called Cantina.

I ask about the bottle walking, which pops up in both Cantina and Scotch & Soda, as well as a bunch of other shows from different companies in Australia. Where did that come from originally?

Carberry grins, and explains that bottlewalking as a discipline was actually the brainchild of McGuffin — an ex-tightwire performer, she came up with it when she was doing a creative residency back in 2008, right after she left Circa. Fun fact: She’s actually in the Guinness Book of Records for ‘Most Bottles Walked’.

Over the last nine years, the company has built on their early success. Last year, they toured four productions, performing 241 shows in six countries. The company won two major awards and was nominated for two more. They employed 29 people. Things seem to be ticking along nicely.

Their success is all the more remarkable in light of the fact that — as I discover during my interview with Carberry — Company 2 receives no operational funding, has no physical space, and only occasionally receives project grants. The company is running, apparently, on fumes and hard yakka. I’m a little shocked. Perhaps living in the well-funded circus utopia of Montréal has altered the wiring of my brain. No funding?

I decide to dig into it to get some context. Some research reveals a bizarre dichotomy: while Australian companies are lapping up international success, support is sorely lacking on home soil. In 2016 the arts community was decimated by the defunding of around 65 arts companies and organizations. On “Black Friday” the federal government announced the cuts, revealing what the Guardian called “the bleak result of years of cuts and bungled policy.”The number of Australia Council grants to individual artists decreased by a staggering 70%. Never has the state of the arts Down Under been so much in strife since the Australian Council for the Arts was established in 1967.

Maddeningly, in the run-up to these cuts, the Australian government poured some $340M of taxpayer money into an elite sports programme called Winning Edge, which was designed to improve Australia’s disappointing Olympic performances (but didn’t). Australia’s priorities, clearly, were set in stone at government level.

The effects of the arts funding cuts have been catastrophic on the Australian arts eco-system, both at the time and in the years that followed. “It’s kind of like an apocalypse.” Carberry says, explaining that companies around the country are dropping like flies since the funding cuts.

Company 2, for example, has never received Australian Council funding at all. They’ve received a handful of one-off grants for projects from Arts Queensland, but their traction is hampered by the fact that Arts Queensland has a strict policy to only fund one project from each art form, and Company 2 shares the state with the longer-established Circa.  Sick of the lack of support, two other Queensland-based circus companies have recently evacuated Brisbane: Briefs and Hot Brown Honey.

Carberry, McGuffin and their company tour 8-10 months out of the year to make ends meet, which doesn’t leave a lot of space for developing new work, strategy or administration. They do everything themselves, while on the road.

I ask Carberry if he’s worried about burnout. “Oh absolutely.”

Case in point: his favourite act in Scotch & Soda — a much-loved perch pole trick — had to be cut from the show when his fellow performer came down with Adrenal Fatigue Syndrome, a lingering form of physical burnout that manifests in the adrenal glands.

While Carberry would love to see Australia consistently lead the charge in the international circus scene, he admits “The difference here (in Montréal) is that the government recognizes circus from a funding point of view.”

The effects of the arts funding cuts have been catastrophic on the Australian arts eco-system, both at the time and in the years that followed.

So while on the surface of things Australia seems to have everything Montréal does—the elite training institution, a healthy mix of companies, a distinctive aesthetic—they’re missing one key component: support.

In the early days of Cirque du Soleil, by contrast, the government of Québec invested consistently and generously over a number of years to secure the company’s future and enable them to grow.

Today, of course, Cirque du Soleil is a multi-million dollar empire, employing more than 4,000 people around the world. It helped put Montréal on the international arts map and is now the single biggest theatrical producer in the world.

I’m not saying other companies could or should emulate Cirque du Soleil’s trajectory, but it certainly goes to show what a little strategic government support can do.

Here’s my hot take: Australia could still become the global epi-centre of circus; they have the passion, talent and the push at a grassroots level.But this is only going to be possible if the Australian government can recognize what’s staring them in the face: that they’re choosing not to invest in one of their most successful exports. Writer -Canada
Rebecca is a writer, critic, commentator and communications consultant based in Montréal. She has worked across a mish-mash of arts and design disciplines over her 15 year career—contemporary dance, circus, data visualization, opera, visual art, digital storytelling, ballet and literature. Originally from NZ, she’s spent the better part of the last decade living and working in the US and Canada.
Rebecca's profile
You are about to enter a members-only zone.
To share this article on your CircusTalk member page and connect with circus professionals from all over the world, sign up now. It's free!
Sign Up
Already have an account?
Log in