Is Juggling Liquid? – Obstacles and Opportunities in Artistic Research in Circus 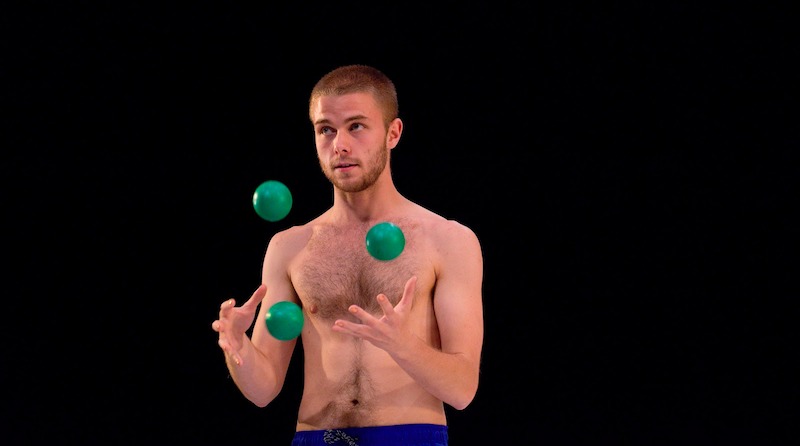 Thoughts on practice as Research in Circus, by Robin Dale, creator and performer of “What Does Stuff Do?”

Thinking it would be enjoyed once, by friends and family, I created  What Does Stuff Do?  in my 3rd year at Circomedia, thinking it would be enjoyed, maybe once, by a niche of friends and family at our graduation performance and hopefully receive a good grade before being resigned to the school archive. Instead, the project has unexpectedly snowballed. With continued demand and positive feedback from audiences, ‘What Does Stuff Do?’ has been the majority of my work for the past 4 years. 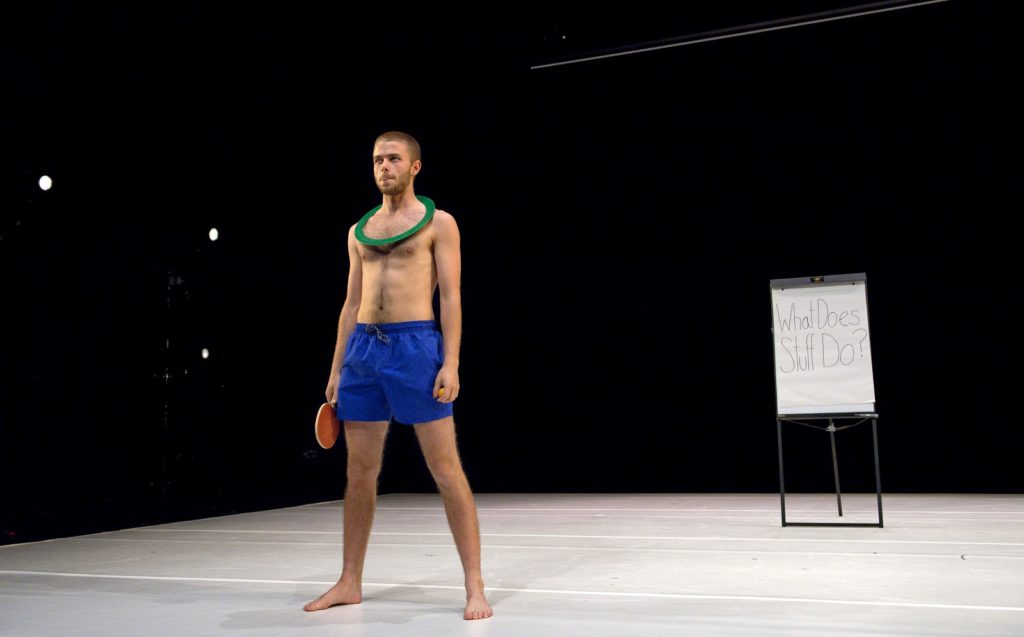 The show is a philosophical investigation into the relationships between people and objects, conducted largely through juggling and clowning. It stemmed from a research project which I did while studying at Circomedia, in which my thesis question wasIs Juggling Liquid? This began as an attempt to develop performable manipulation material with liquid, by translating my juggling practise through various means, and evolved into an investigation into creative notation and the use of tools in manipulation. The project was partly physical; working with water, cups and other receptacles, and later on more hand held tools like ping pong bats, and partly conceptual; creating new ways to notate action and relationships, and designing exercises that other performers could use in their practise. 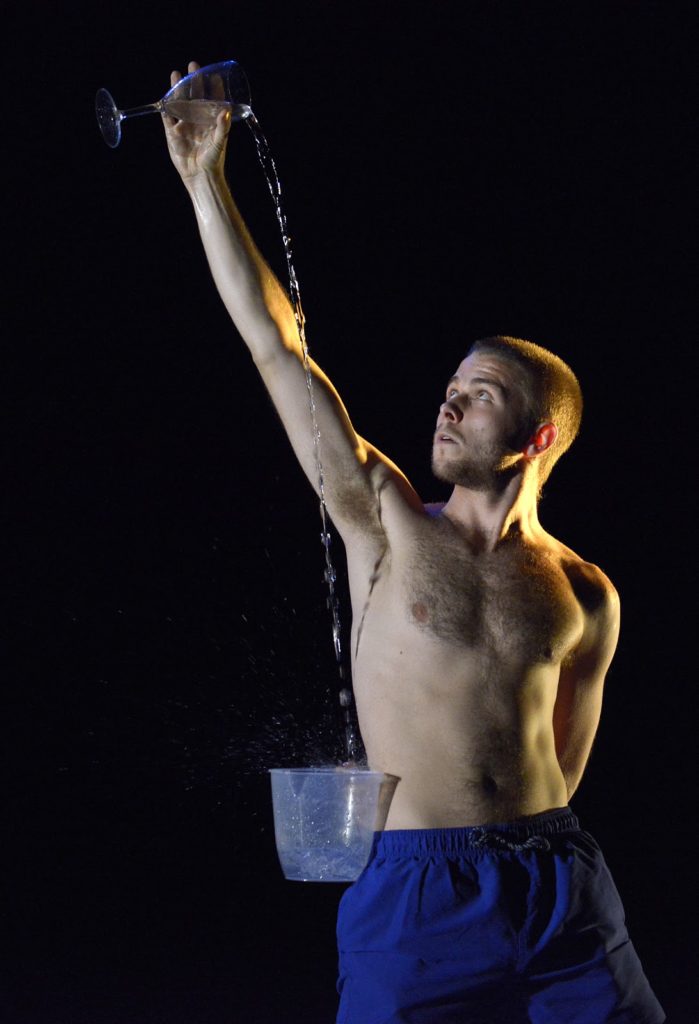 The content of the resulting show is fairly academic, and it’s been very cool to realise that even in circus, people actually enjoy being challenged to think, rather than treated as passive bystanders. People are on the whole, pretty smart and have a great capacity for understanding complex ideas if they think it’s worth it. The success of TEDtalks and more recently long-form podcasts have proved that the general public are willing to engage with complex subjects, but choose not to when it doesn’t interest or serve them. I suspect that this is often a leftover from school education, where learning is generally associated with pain and boredom.

In this article I’m going to talk about different techniques for conducting and performing artistic research with reference to  What Does Stuff Do? &Is Juggling Liquid?

Let’s start by looking at a few different ways that our circus practice can interact with research:

Practice as Research–Using your artistic practice as a tool to establish facts and reach new conclusions. This could include practical research into the practice itself or into new materials or techniques.

Research About Practice–Reading or watching videos on your discipline, learning context/history, going to see shows, talking with other artists.

Practice from Research–Using research that you or someone else has done as inspiration for the content of your practice.

My project involved all of these relationships at different stages, but for now let’s explore Practice as Research, because I think that’s the least obvious, and involves conceptually re-framing your regular practice, which can be hard to do.

If you want to do practice as research, you could start by thinking about what you learn from your artistic practise, and then think about how you could refocus (like a camera) that practice to be more precise about what you will learn. This could be as simple as discovering new tricks, but if you want to use your practice to investigate something outside of itself, one way of doing that is to use language to re-recognise (a great word) what you’re doing, in a way that opens up the potential for discovery.

It’s good if this description gets at your specific focus, rather than describing your discipline generally. For example, instead of saying that juggling is “the practice of throwing and catching objects for entertainment”, I could be more precise and say that my juggling practice is “arranging actions into satisfying sequences which reveal various behaviours of the object.” My practice has then become a tool for revealing behaviours of objects (yippee!) 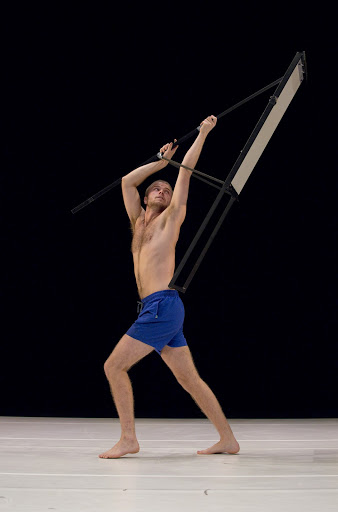 It is important to distinguish research time from creation and rehearsal, and this can be hard to do. When I’m in research mode, I try not to think about making performance, but about creating knowledge or understanding. I have found that if I get stuck trying to imagine a final product I miss the opportunities in front of me. This is true in all artistic creation but is especially vivid in projects with a research element. If I am working with constant reference to a top-down vision, I am stuck working with what I already know, rather than following where the research goes and learning along the way. This is a hard thing to learn and implement about our psychology, and I constantly try to remind myself of it.

One way I have found to encourage a separation between research and training or creation process is to work in a different space. For me this was the changing room and showers at my school, and started as a practical decision to make it easier to work with water as a research subject. Eventually the key elements of this space transformed into the set of What Does Stuff Do? – the shower became a paddling pool, and  the tiled walls I used to make notes on became a flipchart. It was an organic process of growth by which the elements of the world I was working in transformed into the performance world.

It’s hard to let your work grow upwards and nudge it as it evolves naturally, rather than imposing premeditated outcomes, but when it happens the result can be incredibly satisfying: performance that appears intricately designed but which you couldn’t have imagined before you made it.

What Does Stuff Do? is not just based on research but performed in the format of a research presentation. This is Practice from Research: using the content of research I’d done to fuel my practice as a creator and performer of shows. The journey of the show is the presentation of the research I’ve done, and explicitly about communicating ideas to the audience.

The beauty of combining explicit theory with circus is that tricks are such a good relief mechanism if you start getting bogged down or sense people becoming bored.

The combination also allows you to play to many types of people in a single performance.

When I perform WDSD, most children and some adults just let the text wash over them, enjoying it as kooky filler in between the fun juggly bits, and that’s fine. The show is an offer, an invitation to think together, and to engage with however they choose. When they do come along it’s incredibly fun, because you get the sense of thinking together and discovering together.

If you are really aiming to communicate with your performance, that choice can be limiting for your dramaturgy. I wrote What Does Stuff Do? as an essay, to make sure that the conceptual journey is coherent, with each paragraph supporting the next, and the ideas building on each other in a satisfying way rather than popping in randomly. In the actual show, some of the paragraphs are delivered directly in the script, and some are replaced with a physical score which I hope communicates the same idea. If you want to actually communicate ideas with your work, It’s important to be realistic and humble about the communicative reach of your discipline. For eg. Dance is great for provoking complex emotional reactions, but not good for communicating complex ideas. This is one way in which contemporary performance (and other art) can sometimes be infuriating. Even if the performer knows that their solo is a critique on international child labour laws, it is unlikely that the audience will realise this unless you make it pretty explicit. What you can get is the suggestion of deep meaning without any threads of actual content to grab on to. I am desperate to avoid my audience feeling this at all costs.

In What Does Stuff Do?, the sequences are communicative, but only because they’re framed by text. The material makes the content vivid and accessible, but does not claim to communicate anything complex in its own terms. Of course this is only one way around this problem. You can prime an audience to interpret your physical material in a certain way with how you frame it in the marketing martial, copy, and even show title. I’m thinking of the brilliant dark clowning show by Bertrand Lesca and Nasi Voutsas in which they compete for the audience’s respect by undermining each other’s credibility, destroying each other’s valued possessions, and threatening violence. The show is artfully titled Palmira (the name of the capital city of Syria where Isis famously destroyed historical monuments during its occupation in 2015-17), which in a single stroke lends a whole new level of meaning to their interactions and the complicity that the audience feel with them. 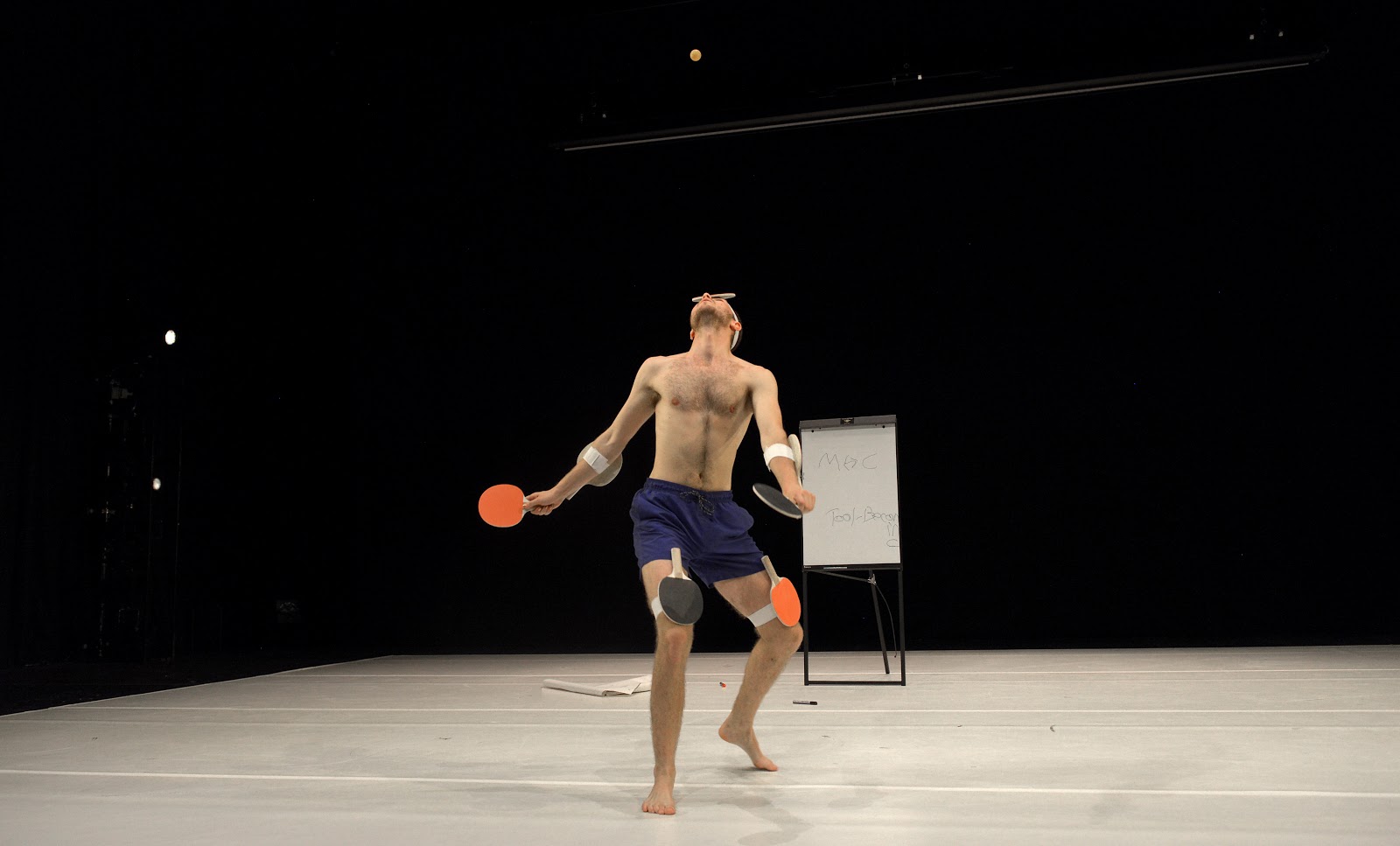 Limited as it might be, the performance lecture provides opportunities that aren’t available to the essay writer. For example, in live performance you have licence to tangent and jump topic in a way that you can’t in an academic essay. If what you’re doing is funny, you can use moments when you know the audience will laugh to put a pin in what you were talking about, and jump to a different track without anyone noticing. Sneaky. Another sneaky thing you can do if you’re communicating through a mixture of text and physical material, is to recap the content of the physical in the text. I start a lot of sentences with ‘We understand that..’  which gives people a chance to get back on board if they’d lost the thread, whilst maintaining the illusion that we all understood it directly from the physical material. The trick here is to keep everyone on the same page, and also providing plenty of reentry points for anyone who has totally lost the thread.

These are just a few mechanics I’ve found useful in this project. There are, of course, endless ways to communicate from stage, and I have greatly enjoyed starting to imagine and realise some of them. It feels like we’re in a time where the public are rediscovering the joy of engaging with big ideas, and I’m excited to see how that continues to permeate circus and theatre performance. There is still a lot of space to play between academia and art, and a great deal of people who appreciate both and are ready to do the playing. After all, why choose between big ideas and big tricks when you can have both? Circus Artist, Teacher, Writer -United Kingdom
Robin Dale is a circus artist, teacher, and writer from the UK. His artistic practise is focused on object manipulation and research based creation. He is a founding member of both Juggling Theatre company Broken Box Collective, and infamous bar flair trio SHAKEDOWN, and has also performed as a guest juggler for the Invisible Circus, Living Room Circus, and Gandini Juggling. He is a manipulation teacher on the BA circus course at the Circomedia Academy.
You are about to enter a members-only zone.
To share this article on your CircusTalk member page and connect with circus professionals from all over the world, sign up now. It's free!
Sign Up
Already have an account?
Log in

Robin Dale is a circus artist, teacher, and writer from the UK. His artistic practise is focused on object manipulation and research based creation. He is a founding member of both Juggling Theatre company Broken Box Collective, and infamous bar flair trio SHAKEDOWN, and has also performed as a guest juggler for the Invisible Circus, Living Room Circus, and Gandini Juggling. He is a manipulation teacher on the BA circus course at the Circomedia Academy.