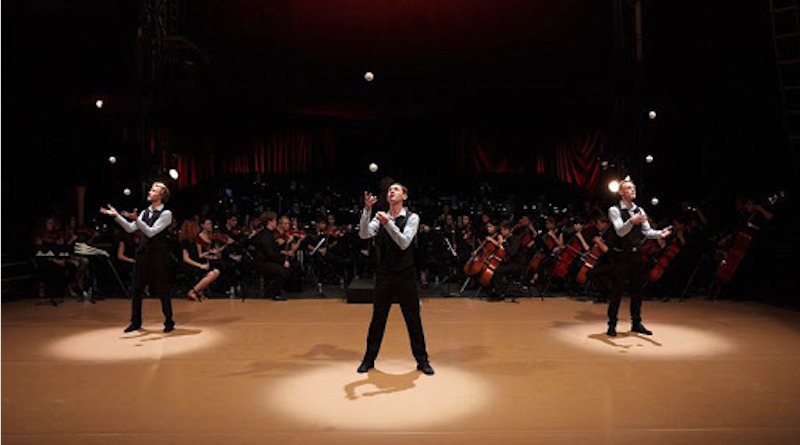 “In all the other languages all over the world juggling is a verb, it’s an action. In the French language it’s not an act and it’s not an action, it’s a word like music, and music is not an act– you play music but music exists in the air. In French, we have the word jonglage, and it has the same concept as music. Jonglage exists without action, so we don’t need to do something to see juggling… we act to share something which exists without us, like music. “ -Jonathan Lardillier

Since jugglers have juggled, they have taught. For centuries the art of throwing, catching, and throwing again was learned visually and verbally, one juggler teaching another by demonstrating a pattern or skill. Often the skill was passed through family members. For the time, this worked well; If you had never seen a juggler perform, it didn’t matter if they knew 10 patterns or 1000 patterns. They were  juggling, that was spectacular. Magical even.

Before any sort of notation system existed for juggling, there was no simple way to accurately communicate a juggling pattern without seeing it in person. Sometime after the golden age of American circus, juggling became more socially acceptable as a hobby as well as a performance art. With more jugglers worldwide, there was a greater need for common language, for a way of communicating rather than demonstrating a pattern in person. In the early 80’s came the invention of siteswaps, a method of notating—with numbers—the order in which objects juggled will land. Seems trivial? Not at all. The invention revolutionized the juggling world and expanded the community greatly. Suddenly, one could effectively communicate any pattern with any juggler on paper, over the internet, or in person.

Imagine the birth of siteswaps to be like the birth of the telegram, an instantaneous method of communicating ideas. Thousands of new patterns were found, one object patterns, three object patterns, or 11 object patterns, you name it. Anything is possible with siteswaps. Since the 80’s, the technical level of the average juggler has increased exponentially, both the hobbyist and performing communities have merged together, blossoming into a single commonwealth focused on bettering the future of the art.

This new way of thinking about juggling became the unanimous language for jugglers. It opened so many doors for the technical and the creative. It became the status quo. Every professional juggler speaks siteswaps, many of the Gandini Juggling Company’s shows are created using the notation, even saying the numbers aloud creating rhythmic poetry in one of their shows.

Siteswaps can be used for many things but measures only the order in which the objects are thrown, and which hand they’re thrown from. Not where they are spatially, where they are in regards to your body, or the rhythm that they are thrown to. This proves limiting for individuals wishing to completely notate a piece of juggling in all its minutiae, like someone might notate music. There are gaps in what one can write down using siteswaps. How does one notate if a ball crosses behind the back and is caught behind the neck? How does one notate the length and pacing of a juggling sequence? These are questions Jonathan Lardillier was considering when he developed “Harmonic Throws Method”—a completely new way to sequence juggling—in 2015. Lardillier compares siteswaps to harmonic throws: “The best difference is that site swap is what is possible to juggle in mathematics, and HTN(Harmonic throws Notation) is the transcription of our juggling feeling. So in HTN, there is a lot of stuff that does not exist in site swap, because the logic of mathematics doesn’t always fit with our feelings.”

Jonathan Lardillier began juggling 12 years ago in Paris with many of the current professional jugglers of France, such as Eric Longequel and Guillaume Martinet. In 2008 Jonathan studied at L’Academie Fratellini for three years and promptly joined the company “les Objets Volant” where he toured for four years. This point in Jonathan’s career is where he began to form his own vision of juggling, one focused on rhythm, repetition, and musicality. After the tour, Lardillier formed his own company, L’Expédition, utilizing the Harmonic Throws Notation system in their work. He also teaches master classes at L’Academie Fratellini and The Centre National des Arts du Cirque (CNAC).

He thinks jugglers should be allowed to build a repertoire from public work. He wants it to be more like the worlds of dance and music.

The idea for harmonic throws began while Lardillier was in school, when other students would play their music on the school’s sound system and would clash with his own internal clock, he knew he wanted to make a method of notation that would allow anyone to juggle to any kind of music. At first, he thought the process would be easy, intuitive even, but he soon realized that if he wanted to be as precise as a musician, he had to approach juggling from the ground up. The system uses three main aspects, the grid, which further develops siteswaps, making musical beats the core of how you notate, the space, which allows the trajectory of the ball around the body, such as a behind-the-back throw to be written easily and succinctly, and the scope, which is the position of the body before and after any given throw. At first glance, all of this new information can be overwhelming. So many new things to think about can seem like simply too much, but there is no method as beautifully specific, categorical, and descriptive as this one. If you learn how to read harmonic throws, as a juggler, you can be 100% in sync with another juggler, performing the same exact sequence, without ever meeting them.

As Lardillier puts it, “I see a lot of juggling companies in France try to do group projects and they have a big problem juggling all together at the same time and you can see it. You see really good jugglers try to juggle a five ball cascade together and stop and finish at the same time for just 10 seconds and nobody is able to do it. This is quite hard to see. People need a lot of time to rehearse and to find a way to be together. Me and my friends who work with me, we can just send by email some partitions and work on it for a week and when we meet all together for two hours we are all synchronized and all together.”

Not only is Harmonic Throws Notation a practical compositional tool, it’s also useful for learning musicality as a juggler. In the resources linked below, Lardillier has shared his entire research paper and various one, two and three ball exercises to help learn harmonic throws, there are also full length compositions, some using music, which will redefine how you view musicality in juggling. He is currently working on a beginner book to teach harmonic throws with around 100 one and two ball sequences to help to learn the fundamentals of juggling, the first tools for understanding space, rhythm, and how to use your arms. He hopes that this book can be used in schools, and especially when teaching young people who can’t yet juggle three balls.

Lardillier believes the juggling world is so focused on originality, that it’s expected of each artist to create something entirely new to be recognized. He thinks jugglers should be allowed to build a repertoire from public work. He wants it to be more like the worlds of dance and music–where any one artist can choose a performance piece to learn and perform, maybe a little outside their skill range, to push them and to grow their skill set.

Lardillier is excited for the future of juggling, the future where we put the emphasis on pleasure and stop obsessing over our seven ball patterns. “All the people that I coach and play harmonic throws with always have a smile, stop to drop, start to have fun, and stop thinking about competition.”

He is inspired by the French juggling community and the many hours-long conversations he has about juggling. He thinks we don’t talk about juggling enough. As he puts it, “In all the other languages all over the world juggling is a verb, it’s an action. In the French language it’s not an act and it’s not an action, it’s a word like music, and music is not an act. You play music but music exists in the air. In French, we have the word jonglage, and is has the same concept as music. Jonglage exists without action, so we don’t need to do something to see juggling… we act to share something which exists without us, like music.” Circus Student, Juggler, Acrobat -United States
Liam Bradley is a juggler and acrobat from Chicago, IL. He's currently studying at Circadium School of Contemporary Circus. Liam plays with rhythm, space, and expectation to create unique juggling and manipulation performances. He is inspired by old school hip-hop, impressionist paintings, and over-priced food. His goal is to defy expectations and create entirely curious compositions.
You are about to enter a members-only zone.
To share this article on your CircusTalk member page and connect with circus professionals from all over the world, sign up now. It's free!
Sign Up
Already have an account?
Log in

Liam Bradley is a juggler and acrobat from Chicago, IL. He's currently studying at Circadium School of Contemporary Circus. Liam plays with rhythm, space, and expectation to create unique juggling and manipulation performances. He is inspired by old school hip-hop, impressionist paintings, and over-priced food. His goal is to defy expectations and create entirely curious compositions.