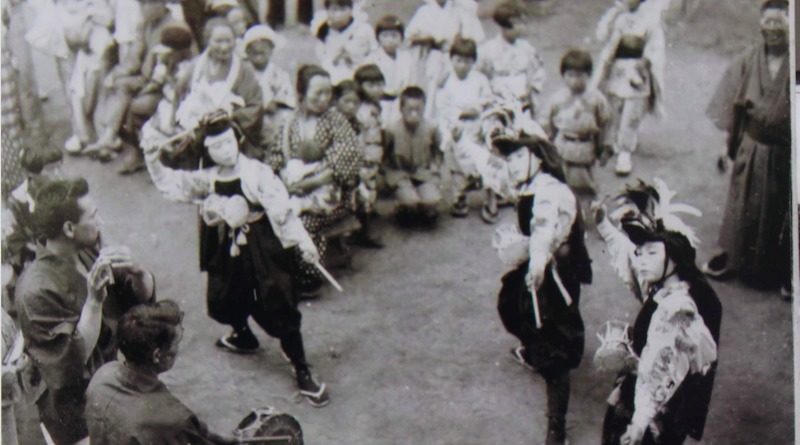 Following up with part one of my series, Mapping Contortion in Japan, I continue exploring the history of contortion and body flexibility in Japan. I decided to interview Tomomi Homma, advisor of the Town Development Minami-Ward of the Niigata prefecture, to gather in-depth information about the history of the Kakubeijishi, the Lion Dance. Kakubeijishi, also known as Tsukigata Lion, Echigo Jishi, Kambara Lion or Echigo Lion, is performed by children of the Niigata prefecture who showcase acrobatic tricks such as tumbling, handstands and body flexibility with a resemblance to contortion poses. It is important to emphasize that the art of Kakubeijishi is not affiliated with the circus industry. Throughout this conversation, it is referred to by Ms. Homma as a dance and the performers are acknowledged as artists or actors. The elements of body flexibility as part of their performance, however, are a crucial aspect when looking at the history and development of body flexibility and contortion in Japan.

Mariam Ala Rashi: Thank you for taking the time and for sharing your knowledge about the Kakubeijishi with us. I would like to begin with the history and development of the Lion Dance. When did the Kakubeijishi develop exactly?

TH: There are several theories about why and how the Kakubeijishi developed. Unfortunately, we cannot say for sure which one is correct. One theory is that a man called Kakubei was once killed but bit off his murderers’ toe during the fight. The killer escaped unidentified and so the children of Kakubei came up with a plan to find the man who killed their father, by searching for someone with a missing toe. They invented the Kakubeijishi practice that included a lot of handstand routines, so they could look at peoples toes without drawing any suspicion.

Another theory is that children who had lost their families were trained to become actors of the Kakubeijishi troupe in order to gain money and support the village that was suffering from annual floods of the nearby river, which caused the loss of the harvest. Therefore, the children traveled around the country all year round to perform and to earn money.

MA: Did the Lion Dance develop independently, or is it connected to other entertainment organizations such as the Misemono for example?

TH: Yes, the development was independent and oftentimes the Kakubeijishi performed in front of building entrances during New Year to bring good luck to the families who lived in the building. Occasionally, the Kakubeijishi troupe would perform together with Misemono troupes on Shrine grounds. However, they had no direct connection to the Misemono.

MA: Why do children perform Kakubeijishi, and not adults?

TH: Only children performed the Lion Dance because they were more flexible than adults. However, about 80 years ago a new law was passed to prevent child labor and prohibited the exhibition and performances of children. But around 50 years ago it became custom for geishas to perform in restaurants and teahouses and so the Kakubeijishi followed this development and started performing again. Nowadays the art form Kakubeijishi is acknowledged as a cultural heritage of the Niigata prefecture and is mainly performed during the Tsukigata festival that is held twice a year in June and September. Occasionally, the children travel together to the capital Tokyo to perform in front of the Kishimojin temple in Zoshigaya that was built in 1578.

MA: How was their training during the Edo period and how often did they perform?

TH: We are not sure how the training during the Edo period looked like, but I assume that it was different from the training today. Nowadays, the children start their training between the age of three to six and they practise every Saturday evening for about two hours. From the age of ten, they start performing and enter the stage. The children then perform until they graduate high school. At the age of around fifteen, they stop performing as they have to focus on their academic studies and prepare for the university entrance exams. The program of the annual Tsukigata festival is about 55 minutes with each individual performance being around 5 minutes.

MA: What meaning do the costumes have? The chest piece, for example, is a left-facing, white swastika* (a spiritual symbol of divinity that can be found in Hinduism, Buddhism and Jainism) on a black background, and the headpiece is a lion mask, decorated with chicken feathers. Have Kakubeijishi performances, therefore, a spiritual context that is rooted in Shinto or Buddhism?

TH: The exact meaning of the costume elements is not discovered; however, the Kakubeijishi artists mostly wear these costumes when performing in front of the shrine. It is said that the Syaka Buddha once taught a mother, who had become the wife of a demon, about the sorrows of losing a child. The symbolism of the costumes is also tied to the Buddhist deity Kishimojin who is considered both goddess and demon. Her positive characteristics protect children and stand for happy child rearing and easy child delivery, while her negative characteristics punish irresponsible parents and badly-behaved children.

The swastika may derive from the fact that Kakubeijishi was performed by children without relatives and a monk of Tsukigata in the Niigata prefecture recommended the swastika to the traveling children as a prayer and protection for a safe journey. The lion mask is a widespread element in Japanese performing arts. Kagura dancers, to name one example, wear lion masks as well, to embody the spirit of the lion as a ritual and worship.

MA: What kind of music is played during the performance and does it have a meaning?

TH: The performers are accompanied by musicians who play the drum and the flute as well as one person who narrates the performance. The speaker explains the meaning of the dance and each movement to the audience. The movements of the dance often represent the landscapes of the country such as for example, Nagoya or Shizuoka. The original purpose of the Lion Dance was to entertain people who were not able to travel, by representing famous landscapes of Japan through specific movements during the Kakubeijishi performance [1].

MA: Is there a fixed number of performers? Is it always a group performance?

TH: The number of performers depends on the specific form of the dance. The minimum is two children and the maximum is around ten or twelve children, depending on the complexity of the landscape they are depicting in the performance.

MA: Do only boys become Kakubeijishi performers or do girls participate as well?

TH: No, girls perform as well.

MA: What is the value of a Kakubeijishi performance among the people of the Niigata prefecture, and is it considered an art form, spiritual practice or a sport?

MA: Is the Lion Dance a popular practice or is it considered an endangered art form?

TH: Unfortunately, the number of performers is decreasing each year. This year we only have eight children who perform. I am afraid it is gradually decreasing.

Nowadays, people visit the Kakubeijishi lions who perform during the Tsukigata festival to explore the cultural heritage and historical context of the performances. Kakubeijishi appears as well in various outlets such as TV shows, poetry, and rakugo (Japanese verbal entertainment).

The Tsukigata festival is held twice a year, in June and September, to showcase the intangible cultural heritage of the Niigata prefecture (the festival in 2020 however, was canceled due to Covid-19).

*Author’s note: “The swastika is an ancient symbol that was in use in many different cultures for at least 5,000 years before Adolf Hitler made it the centerpiece of the Nazi flag.” [from the Holocaust Encyclopaedia]. I would like to use this opportunity to provide more context about the history of the swastika for the interested reader:

Holocaust Encyclopedia-The History of the Swastika

How the Symbolism of the Swastika Was Ruined

The Powerful Symbol of the Swastika and its 12,000 Year History Cultural anthropologist, dancer -Japan
Mariam Ala-Rashi is a cultural anthropologist for dance and performance studies with an M.A. from the University of Roehampton in London, UK. As a professional dancer and dance instructor, she has worked internationally and won numerous awards in Europe and Asia. In 2011, she was accepted to the Beijing International Art School and studied contortion full-time for more than 4 years, and continued her contortion studies at the Mongolian National Circus for another 2 years. Simultaneously, she worked as author and researcher carrying out fieldwork in East Asia, focusing on dance and circus arts. Her recent publication is "The Art of Contortionism. An Introduction to and Analysis of Chinese Contortionism in a Historical, Political and Social Context." She currently lives in Japan to continue her anthropological research in dance and performance studies.
Mariam's profile
You are about to enter a members-only zone.
To share this article on your CircusTalk member page and connect with circus professionals from all over the world, sign up now. It's free!
Sign Up
Already have an account?
Log in

Mariam Ala-Rashi is a cultural anthropologist for dance and performance studies with an M.A. from the University of Roehampton in London, UK. As a professional dancer and dance instructor, she has worked internationally and won numerous awards in Europe and Asia. In 2011, she was accepted to the Beijing International Art School and studied contortion full-time for more than 4 years, and continued her contortion studies at the Mongolian National Circus for another 2 years. Simultaneously, she worked as author and researcher carrying out fieldwork in East Asia, focusing on dance and circus arts. Her recent publication is "The Art of Contortionism. An Introduction to and Analysis of Chinese Contortionism in a Historical, Political and Social Context." She currently lives in Japan to continue her anthropological research in dance and performance studies.