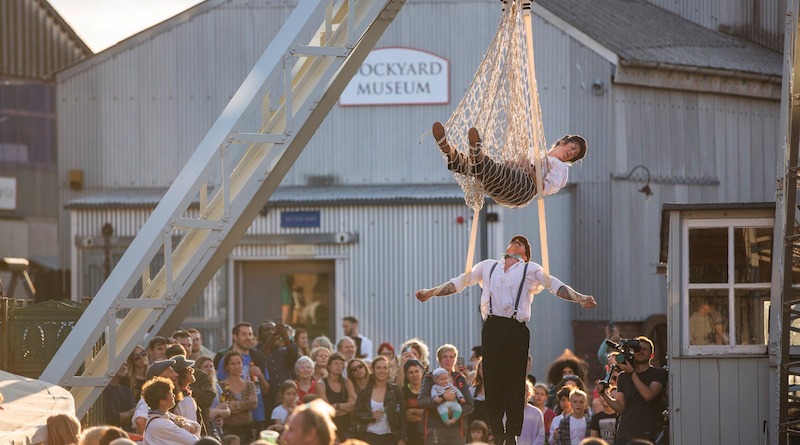 Jamie Double began his circus journey at the age of 27 when he discovered Swamp Circus and Circo Kernow in the UK. A juggler, turned static trapezist, turned partner acrobat : Double started performing at festivals, town fares and cabarets with his trio comedy strong man act, “Trifleenees.” Not long after his career began it nearly came to a halt with complications from an old operation leaving him near death. Double said that he made his recovery with “plenty of support from friends and family” and was able to move to Bristol in order to attend Circomedia.

Double attended Circomedia at first for duo acrobatics and aerial straps, then specialized to become an acro base in his second year, “I love the relationships that are created between base and flyer, it’s quite unlike anything else and is easily my favourite thing about it,” says Double. He was the senior academic representative for Circomedia in the B.A. program and says he spent his final year, “refining his acts, researching hand balancing and creating a twenty minute solo show about male mental health awareness.”

Double graduated from Circomedia’s BA program on June 21st 2019. Now that he has graduated, Double says, “I have a summer contract with the Invisible Circus in Bristol performing on Brunel’s SS Great Britain. In between performance days there, I’m performing in a few cabarets up and down the country, a few festivals, and a bit of corporate work…” Jamie described his time at Circomedia as “just a constant feed from an ever loving community all day every day.”

Watch the following video to see Jamie Double and his duo partner, Elissa Rose, featuring excerpts from a piece that they made for Circomedia’s 2019 third year touring show, Out of the Loop.