Meet the Circus Festival: Hand to Hand, May 29th-June 3rd in Philadelphia

Meet the Organization North America
May 22, 2018May 5, 2021 Kim CampbellFestival, Meet the Festival

In our new series titled Meet the Festival, we will explore some of the many festivals of the circus world. Each year, new festivals spring up around the globe and begin to establish themselves, even as others prove year after year that the circus audience is growing and diversifying. This month we are featuring the inaugural and upcoming Hand to Hand Festival as the organizers combine resources and their expertise in circus and festivals to build a new tradition.

Hand to Hand is a new, multi-day festival of contemporary circus art presented by FringeArts and Circadium School of Contemporary Circus. Featuring internationally renowned artists alongside the region’s most forward-thinking circus performers and up-and-coming innovators, the festival brings remarkable levels of artistry and ability together into one thrilling week of events.

Program options:  Performances and interactive midway (targeted at audiences rather than circus professionals)

Number of shows/performances each year:

This first year of the festival will feature five performances and an interactive circus midway. Circadium’s first class of students will usher in the festival with a showcase of short, theatrical performance pieces in an event dubbedCircadium: Innovations. Headliner Barcode Circus Company will share their first original production,  Sweat & Ink, for three performances to make up the centerpiece of the festival. The celebration closes out withTest Flights, a free, works-in-progress showcase celebrating the cross- pollination of circus arts with other performance disciplines.have

One of the companies performing at the festival is Barcode Circus Company, made up of Alexandra Royer, Tristan Nielsen, Eric Bates and Eve Bigel. Together they have performed in over 25 countries and received distinctions in all of their respective disciplines—including Russian bar, hand to hand, cigar box juggling, and aerial hoop. No matter where they are in the world, they continue to train and push the possibilities of their art. ForHand to Hand, they will be presenting their first original production as a company.Sweat & Ink is a surrealistic and dream-like exploration of contemporary society’s relationship to memory and time. In it, the intrepid quartet utilizes circus disciplines they’ve built their reputation on while evoking elements of calligraphy and magic to express the means by which we record our histories and how our brains can remodel our recollections. Barcode Circus Company won a silver medal, a bronze medal, and the People’s Choice Award at the Festival Mondial du Cirque de Demain this year. 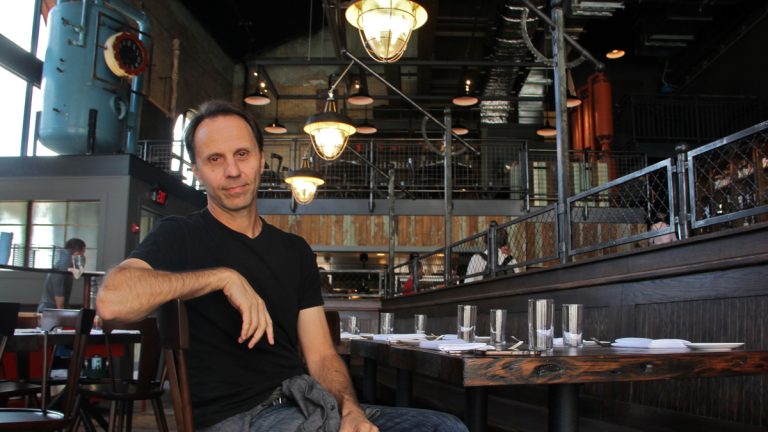 Nick Stuccio is the president and producing director of FringeArts. His career in the arts began with an intensive study of classical ballet at Skidmore College, where he also earned a degree in biology. His dedication to the form led to an apprenticeship with the Pennsylvania Ballet and eventually a position as a corps member with the company, where he danced for eight years. In 1997 he co-founded the annual Philadelphia Fringe Festival, which has since grown into the year-round contemporary performance presenter FringeArts. The organization seeks to expose audiences to genre-defying dance, theater, and music performances by accomplished and emerging innovators who push the boundaries of art-making and redefine the artistic landscape worldwide. We spoke to Stucco about the upcoming festival and his hopes for its continuation:

Kim Campbell: What is something unique about the festival?

Nick Stuccio: One of the most important aspects of this festival is our great presenting partnership. Circadium and FringeArts working together have provided a strong and essential foundation for this new endeavor. On the one hand, we have a very ambitious, very prestigious circus school that aims to train some of the world’s finest contemporary circus artists, and on the other hand, you have a storied performing arts presenter whose mission is showcasing some of the world’s finest contemporary artists. So, there’s a great synergy between us which will make the festival strong, make it grow, and make it last. The two halves of the whole just complement each other perfectly.

KC: Who should attend the festival?

NS: In this first year we are really aiming to attract families. This is a demographic we don’t generally cater to, so it’s exciting to have this new vehicle to bring some uninitiated audiences into our space. At the same time, our regular audience generally skews towards vibrant, adventurous young people, and we think this work will undoubtedly appeal to them as well.

Our headquarters does feature a restaurant, bar, and beer garden, so I imagine that in coming years, to diversify our offerings and expand our audience, we’re going to populate this festival and our venue with more artists who are edgy and doing work that is decidedly for adults. I see future iterations ofHand to Hand being somewhat dichotomous in that, by day there will be plenty of family-friendly programming, and by night the offerings will be a bit more risqué.

KC: What is your dream for the future of the festival?

NS: This first year will give us a good sense if there’s the audience and capacity here in Philadelphia to grow this festival into something bigger. I would love for it to expand to multiple venues and feature multiple headliners, and ultimately see if it might someday rival the size of the Fringe Festival in scale and importance.

Contemporary circus is certainly a thriving and evolving discipline, and the field is really growing into our organization’s mission. So many companies are using the tools and virtuosity of the form and fusing them with really smart contemporary art thinking in some very singular ways. That’s the kind of performance that I like and something I would love to continue to showcase withHand to Hand. Given that we are, at our heart, always looking for that new thinking in whatever it is we’re presenting, that’s what our focus will be with circus. Where are the brand new ideas? Where’s the frontier of contemporary circus? That’s where we’d like to be.

Circadium is the first diploma-granting circus college in the United States, and this is the end-of-year show for our first year of our first class.  Circadium opened its doors in September 2017, and the students have spent this year immersed in theatre, dance, history, music, and writing classes, in addition to their hours of circus training.  The class includes 9 students: Delaney Bayles, Luna Deasy, Stephen Doutt, Chauncey Kroner, Zak McAllister, Celeste Murman, Alex Russell, Tara Talland and Maya Zuckerman. Check out this little video they just made.