Meet the Makers of the Hideaway Circus Podcast 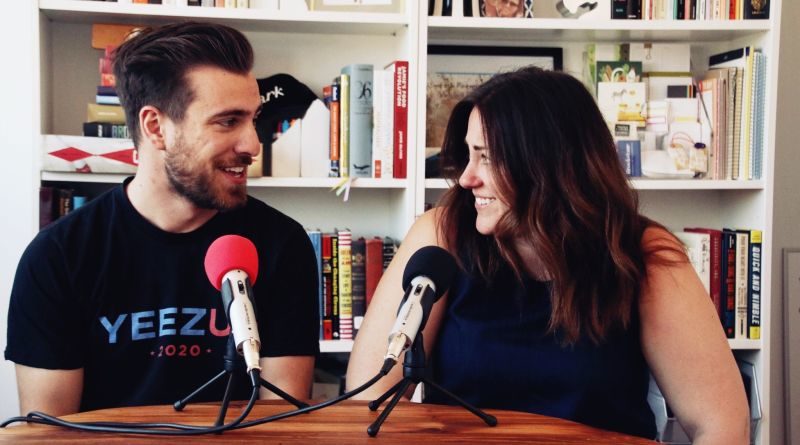 Hideaway Circus is a Brooklyn-based production company run by creative producers Josh Aviner and Lyndsay Magid Aviner. The company’s live productions include their slasher circus show Slumber described by Time Out as “contemporary, sexy and a little bit dangerous,” and the New York Times critics pick, Miss Behave Game Show now playing at Bally’s Casino in Las Vegas. They are currently in production shooting a circus and dance experience designed for viewing in virtual reality. But it was their award-nominated Hideaway Podcast we wanted to talk to them about, a podcast where they discuss current circus and theatre news and interview artists and entrepreneurs in the industry.

Stav Meishar: Tell us a bit about yourselves and what brought you to circus.

Josh Aviner: I saw Cirque du Soleil when I was 8 or 9, and I walked out of there thinking “Oh man! I want to do circus!” I just knew it. Then I went to Circus Smirkus camp for about three years, then I went on tour with them for four years, and during that time I really cultivated my love for circus. Then moved to NY for my undergrad at NYU studying film, during that time I started working at The Box performing there and eventually casting for them. Then went to Columbia for grad school studying theater producing, where I met Lyndsay.

Lyndsay Magid Aviner: I went to the circus growing up and always knew I loved it, but it was Josh who re-introduced it to me. My background is the typical theater background – “I’m gonna be an actress!” – then realizing that’s probably not gonna happen and I started thinking of arts management. So I went to Florida to study theater arts management, moved to New York, got an acting agent and auditioned and hated it. Worked for a few theater companies and decided that acting really isn’t the life for me and went to Columbia to focus on commercial theater producing. I met Josh and went to see tons of shows with him because I thought he was cute, so we saw everything. I re-fell in love with circus and everything it allows you to do. I felt boxed by what I could produce in theater, versus circus that felt like anything was possible and allowed.

SM: Tell us about your HIDEAWAY podcast.

JA: I’ve always loved podcasts because they’re long-form conversations where you really get to know a person through their voice. Plus, growing up in circus I found that getting real information about what’s happening currently was nearly impossible, and I also wanted the opportunity to talk to lots of people I admire. So we bought equipment and started doing it. We’ve currently done about 60 episodes! We’ve had circus companies, circus artists, social circuses… It’s been awesome to listen to people have hour-long conversations about their lives and the state of circus.

SM: What are your goals for the podcast? What impact do you hope for it to have?

LMA: The podcast is only one facet of our HIDEAWAY company, which we started because we wanted to talk to people about trends of the market, what audiences are liking, how we see a shift in circus happening. Those are important things to know as producers. So the podcast, for us, is a great way to keep in touch with how circus is doing globally and locally.

JA: We wanted to create a free resource for people, and that would also get us out there so people know about us. We want this knowledge to be out there for all so it answers the questions of the current and next generations of circus.

SM: At any point throughout this podcast journey have you felt that you’re creating change in circus world?

LMA: We would get encouraging emails from so many people all over the world who are tuning in. Then when we went to Smirkus this past summer some girls came up to us and said “We fall asleep listening to your podcast every night!”, and that really felt amazing, this is what we started the podcast for. Some Smirkus parents said they listen to it as a family, that’s their circus education, so to me it feels like we’re doing something good.

JA: We do the podcast for other people too, but the primary reason is for the information we get – then anything we get, everybody else does too. Doing it in itself is a reward and a goal, regardless of whether other people get it or not.

SM: Circus is a very visual medium. It’s live entertainment, and podcasts are more food for thought. How do you feel a podcast complements the experience of circus?

JA: Podcasts run the gamut, but I do hope people find ours both informative and entertaining. We’re talking about the stories behind circus and behind circus people, to listen to people interpreting their own lives in their own voices is really special. In that way you really connect to it.

LMA: Listening to the podcast after you’ve seen these artists, you learn how they trained, how they got to that point. You get a deeper appreciation for something you’ve enjoyed, and you learn about how the people you look up to got there.

JA: Many shows these days do have an implied subject matter. Allowing our guests to talk about it can enhance the viewing experience, or just be a fun piece of trivia .

SM: Share one or two really special moments you’ve had over 60 episodes.

JA: We had a guest, Sellam Ouahabi, whose story is one of the coolest we’ve heard. He’s a Moroccan guy who’s a master circus coach now, but when he was 10 years old he saw some acrobats tumbling on the beach and convinced them to teach him how to do that. Then a year or two later they were hired by a circus and he decided to join them, leave Morocco and tour the world. Hearing the story of someone who isn’t white and has experienced racism in the circus, and hearing about circus in the 70s and 80s, to me that was just amazing.

LMA: Meeting Paul Binder, founder of Big Apple Circus. Having seen BAC when I was little and having strong memories of that, then having him in our home office, talking to him as an adult, to me was a really cool moment.

SM: You’ve interviewed people from all over the world. How do you feel circus in America differs, and where would you like to see it evolve?

JA: Everything starts with funding and youth circus programs. The latter is important because that’s where you develop the next generation of artists as well as patrons. The same way kids do plays or sports in high school, then grow up to enjoy watching it as adults, it’s the same thing in circus. It seems like the more proliferation of youth programs there is, the more shows will happen in that region because there is a passion from an early age.

The other element is funding. Everything in the US is commercially funded, which isn’t all cons. In the UK or Australia, even if you’re an individual artist it’s not super hard to get a couple thousand dollars to put your show together. When there are lots of people making shows, who have no incentive to sell them, often the work is not created for an audience because they’re already funded in advance. So in Australia or France you’d see shows that artists spent so many hours developing but nobody comes to see them. You don’t have that so much in the US because it’s so hard to get funding for shows. Everybody has so much personally invested in the show that they promote it like crazy. It’s much more bulletproof to socio-economic change, we already have our own ecosystem that allows circus to exist even without government support.

SM: Could you recommend one episode each to someone who might be on the fence about whether circus interests them or not – to hook them?

JA: Whatever the recent episode it, cause we always talk about the most recent news in circus and what’s going on in the industry.

LMA: Mine would the Gypsy Snider episode. Hearing about her journey through circus runs the gamut of what listeners might be interested in. Then once you like that, you can listen to the others.