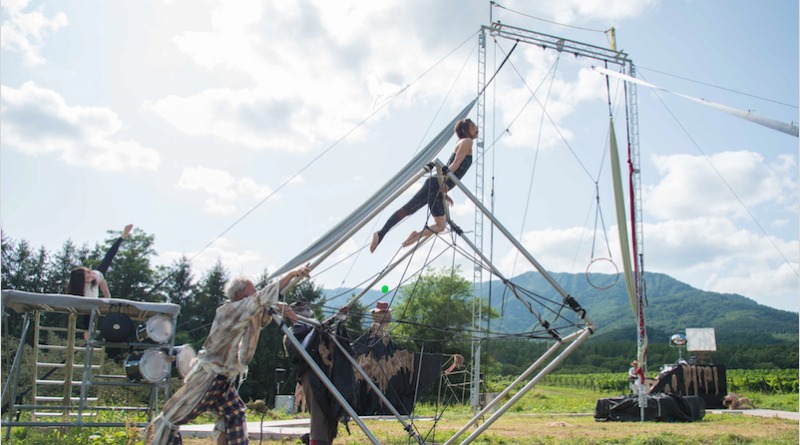 I started producing contemporary circus in 2004 in Sapporo when I was working for the Hokkaido Shimbun Press (in Japan, there is a section for events production in all big media companies) and we invited Baro d’Evel, Cahin Caha, Association W (Jean-Baptiste André) and Feria Musica for four years in a row, and got almost 20,000 audience members with paid tickets. I think it was the first case in Japan that contemporary circus shows were presented by the same organizer for several years. I was the coordinator and one of the ones responsible for those projects.

After that, as the journal decided to suspend this project, I quit my job to be an independent producer in circus and went to France to write the first survey book on the contemporary circus in Japan in 2007. The book was published in 2009 with support from the French Embassy in Japan and Horslesmurs (now called Artcena) in Paris.

After working for two big art festivals (Echigo Tsumari Art Triennale and Setouchi Art Triennale), I moved to Takamatsu, in the Setouchi region to start my own projects on contemporary circus in 2011. Even then, the contemporary circus was not visible in Japan. But I encountered Yosuke Meguro, director of Nagame Kurashitu, also a juggler and show creator, and  I was surprised to see a young artist was trying to create circus shows without any big supports. So I decided to found Setouchi Circus Factory, the initial purpose was to encourage these artists and to create jobs for them to be able to earn their lives and to continue creating.

Very soon, I realized that I have to do everything to develop this field because we had very few artists who knew about circus creation and were able to do it. We had almost no riggers, there was no residency space for circus, and no circus schools. That’s why I had to do everything.

To enable these things, the public and private supports were indispensable. But no one knew about contemporary circus! The first thing that I did was to start talking about it. I organized several hundred conferences to let the people know about this art (I named this activity the  “Thousand and One Nights” because I was convinced I’d have to do it a thousand times.) At the same time, I started to feel that “talk” was not enough, so I started to create shows with Japanese and foreign artists.

In 2015, we organized the first contemporary circus festival in Japan which was, to my knowledge, the second one in Asia (the first one is Tinitinou Festival in Cambodia).

I continued to organize it until last year (the 5th edition.) After that, I decided to suspend it because it was a heavy responsibility for one person. I still hope I’ll find a good partner who will recognize the value and be able to share the responsibility with me.

We are admitted as a member of Circostrada which was the first case in Asia. Then, we founded a new Asian contemporary circus network (CAN) in 2018 with members from seven countries and 12 organizations. It was Seoul Street Art Creation Center who took the initiative to launch it. Setouchi Circus Factory is one of the core members. We are actually active enough to develop our relationships and meet regularly, some collaborative projects have already started. For example, an exchange program between the National Kaohsiung Center of Arts (Taiwan) and Seoul Street Arts Creation Center started last year. Some Korean artists went to Taiwan to do some creative workshops with Taiwanese artists. They did the same thing in Seoul too. Also, we’re planning to collaborate among SSACC, Setouchi Circus Factory and Hsingho (Taiwan) and Circus Next during 2020 – 2022.

Now, I feel that contemporary circus is emerging in Japan and I’m very happy about it. I see several theaters in Tokyo and around Tokyo have started to program contemporary circus in a very regular way. The number of artists who are interested in circus creation is increasing. Also, there are some circus people who opened their training spaces such asKansai Aerial in Kyoto, Circus Laboratory Coucou in Tokyo.

As this year is the 10th anniversary for Setouchi activities for me, I started to imagine how my work should be for these next 10 upcoming years, as the situation is fortunately changing. The idea itself of a new network in Asia came up during conversations between Donghee Cho Seoul Street Art Creation Center and me since 2012 as we have known each other for a long time. Then Donghee, with his team, decided to call for the pre-meeting in 2017 for launching a new contemporary circus network in Asia. The first kick-off meeting was taken place in Seoul in 2018. 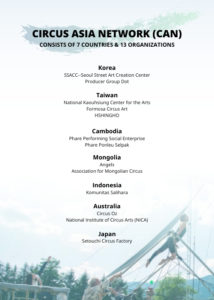 Since the inauguration, we have organized 4 general meetings, twice in Seoul, once in Setouchi (Japan), once in Taiwan. The next one is coming up in May this year in Cambodia at the Tinitinou Festival. The aim ofCAN is “developing contemporary circus in Asia through a nurturing and cultivating environment”.

Last year, there was an exchange program between Korea and Taiwan with artists from each country, which seemed very interesting and fruitful to me. We are thinking to develop this exchange program with other member countries.

And to add a little bit about my activities as Setouchi Circus Factory, what I’m interested in and put my energy in now is to collaborate with different partners in society as; a construction company, an iron industry, wineries and so on. For example, with a construction company, we started a program to train riggers among scaffolders. Also, we created a circus show about the work of scaffolders. With the iron industry, we started to create a circus apparatus. They usually produce huge industrial cranes and bases of trains. These projects were born really from our “needs” and not only for an artistic interest!

But the result is incredible. The people who didn’t have any idea or relationship with arts got to know the contemporary circus and the managers told me that this experience gave their engineers and operators, scaffolders a big hope, an inspiration, and honor and respect for their own work. I think it’s the power of arts and this power has to used in society.

My recent theme is “Let’s step out of the small art community.” Because for me, if I stay in the art community, the engagement of people to the contemporary circus will remain very small. It’s not easy at the beginning, but when some people start understanding it, it’s magic.

I also visit meetings of economic people to explain about contemporary circus because Japanese society mostly consists of economic people (!), and if they don’t understand the value, we can never achieve enough impact to the society. Of course, there are many more failures than successes, but I still feel happy when I see the change in some people.

However, I have not  yet received “advocacy,” because I’m still struggling for  “understanding” and “recognition.”  Now I think a lot about how to start working for advocacy, working with the city, with the prefecture, then with the Ministry of Culture.

There is so much to do. Director, Writer -Japan
Michiko Tanaka is the founder and director of Setouchi Circus Factory. Being passionate by contemporary circus since 2004, she moved to the Setouchi region to start her projects to give birth to and nurture a new circus culture. She is also the author of "Circus ni Aitai", the first survey book on contemporary circus in Japan.
You are about to enter a members-only zone.
To share this article on your CircusTalk member page and connect with circus professionals from all over the world, sign up now. It's free!
Sign Up
Already have an account?
Log in

Michiko Tanaka is the founder and director of Setouchi Circus Factory. Being passionate by contemporary circus since 2004, she moved to the Setouchi region to start her projects to give birth to and nurture a new circus culture. She is also the author of "Circus ni Aitai", the first survey book on contemporary circus in Japan.