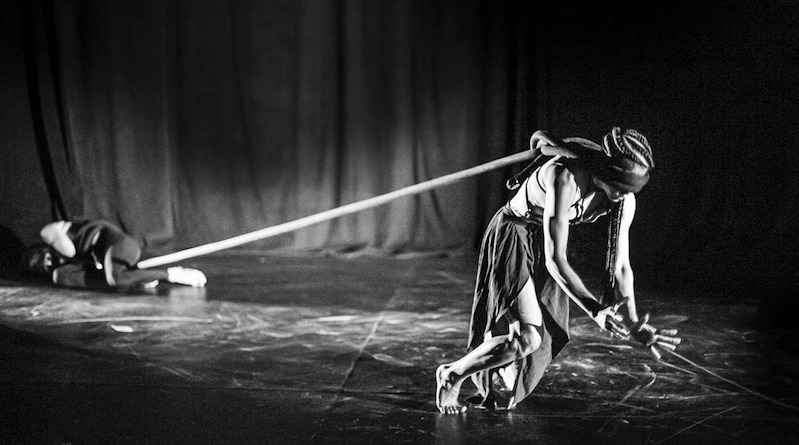 It was the day before the dress rehearsal of our show Limb(e)s in Montreal’s La Chapelle Scènes Contemporaines venue. The performance was programmed as part of the Montréal Complètement Cirque Festival, and this was also going to be our first time running the entire work in “show conditions.” We were simultaneously excited to premiere, and feeling the increasing pressure of having only the two of us as the entire production team. The last premiere we had experienced was with Cirque Du Soleil who had an incredible team making sure we had all our needs met, and problem-solving non-stop in the months leading up. We were managing our expectations of ourselves at the end of a tech rehearsal when the director of the theater came in to inform us that he would open the house to industry VIPs for tomorrow’s dress rehearsal… the pressure just quadrupled.

Over my career, I have been incredibly fortunate to have been a part of numerous creative projects. Among these, I participated as an artist in the creation of Cirque du Soleil’s TORUK – The First Flight, and as an artist and choreographer in Limb(e)s, Ci Co’s first contemporary aerial dance show. Each project had its own unique set of goals that influenced the creative project and informed the product before it began. I have found it incredibly important to measure a project’s success not based on personal preferences, but on whether the project has achieved what it set out to do. Knowing, of course, that as the work matures, these goals may mature reciprocally. Each new creation is a completely unique experience, yielding different results. That being said, for the sake of discussion let’s categorize the infinite variations into two types: those that are produced by large companies and those that are produced by small independent ones. Having had incredibly rich experiences in both environments, I would like to take a moment to share my insights into what those creation periods are like and to highlight some of the differences I noticed.

Preparing for the Creation; First Days

Before artists arrive at the first creation rehearsal, Cirque du Soleil is careful to restrict how much information they share with the artists about the show itself. TORUK – The First Flight happened to have been based on the movie Avatar that had already been in theaters and the biggest piece of advice we were given was to watch the movie multiple times. Meaning that when we arrived, we were not entirely aware of what skills would be asked of us. The first few days were a pleasant easing into things as there were many of us wide-eyed artists excited to meet people and understand our new reality. For the first week, we spent a lot of time being introduced to the structure of the company, and our future role as employees. Of course, there was a lot of training and physical work involved, but that was not initially the sole priority.

By contrast, leading up to Ci Co’s first creation residency, we constantly discussed the concepts and states-of-being we wanted to explore, as well as questions we wanted to pose to ourselves and the work. We had a close rapport with the few people who made up our creative and technical team. There was less nervous excitement for the unknown and more of a relief to enter into a quiet black box and open ourselves up to the work. We did our best to let our intuition guide us through the multiple propositions we explored in the aerial apparatus, in partner work with each other, and in embodying our concepts. In rehearsal, we would focus on one discipline or style of movement until the creative flow dissipated, at which time we could freely change the plan and focus on other sections or aspects of the work.

The Cirque du Soleil creation was tightly scheduled. We had multiple directors and in some scenes, there would be as many as seven people giving notes pertaining to their individual fields (i.e. acrobatics, dance choreography, acting, costumes, artistic overview). Each of these professionals was dedicated to offering the best work they could for the show, but as people whose work is later judged individually, they could at times place the importance on their own discipline above that of others or the ultimate needs of the show. This bias is completely understandable but when large companies have teams inside of teams creating in separate departments, it’s sometimes to the detriment of the cohesive whole.

Our creation with Ci Co gave us greater freedom to develop the show as a whole because we were committed to listening to what arose from the work as it came up. We would explore a specific idea for an afternoon only to realize that it did not serve the work, or perhaps had revealed a single gem. Often this gem was not what we expected and could not have been discovered without this flexible approach. The next task was to focus on what made that solitary gem shine. Through peeling away layers we could refine our scope to find the core of the work as we went. It was only because we did not have too precise a preconceived notion of the show’s identity that we could listen until it assumed its own form.

Time, energy and money are the three major resources that will influence a work no matter the scale or intention and it’s interesting to reflect on how a work is shaped by these restraints. These factors are much like a mold for baking, not preventing growth, but directing it to the desired product.

As artists during the creation of  TORUK, we had the full support of specialized coaches, physiotherapists, consistent hours, fully equipped facilities, and lodging in close proximity to the creation studios. Our logistical needs were met but the environment was so product-oriented, and with different decision-makers present at different times, that it was hard to dive as deep into experimentation as is possible in a more flexible process. Exploration of physical performance was limited by technical needs such as the programming of lighting, projections and automation, and in order to stay on track with “Lion’s Den” presentations (work in progress showing with Guy Laliberté and other key players with major veto power present), and premieres.

In the creation process of Limb(e)s, the development of the work was limited by a lack of consistent access to equipped rehearsal facilities and technical and production expertise and support, but we also found ourselves with more freedom and flexibility to ‘take the scenic route’. In these small-scale productions, there is greater opportunity within this more flexible process, to realize that the work is something different than what you had initially anticipated, and to change course accordingly. In large companies with product-oriented agendas, there is typically a need to know what the product is from the early stages in order to market it. Every aspect of creation is on a tight schedule that can inhibit spontaneity.

For Cirque du Soleil, I made the mistake of looking to my left and right and realizing I was the only me and in the beginning, I thought that this was an undesirable thing. Even after a lifetime of experience in this industry, I was quite insecure and humbled. It took me most of the creation period before I could stand proudly on my own two feet and realize that the best thing I could offer was me.

Even after a lifetime of experience in this industry, I was quite insecure and humbled. It took me most of the creation period before I could stand proudly on my own two feet and realize that the best thing I could offer was me.

For Ci Co, it would be too easy to say that I wouldn’t change anything about the process and that the work that was revealed was what it was. But upon further reflection, I would say that the work would have benefited from a bigger team. Having had a dramaturge in the drawing-room early on would have been ideal to help us get to the heart of the conceptual content, and having more technical support would have allowed us a little more breathing room. But that’s the perspective that comes from experience and as we look towards our next creation we aim to find that golden number – a team that’s not too big, not too small, but just right.

Each and every creative deep dive will offer unique lessons to learn. Even when part of a creation with many parts to the machine, it is important to remember that it is our responsibility as artists to take ownership of what we have to offer in the process. Knowing that being unsure is part of creation, and bringing oneself fully to the process even with these doubts, is the kind of “showing up” that elevates the work and our individual practice. Director, Choreographer, Actor, Acrobat, Dancer -Canada
Jeremiah Hughes is a director/choreographer, an actor, and an acrobatic dancer. During his career, he has had the honor of dance captaining multiple shows such as Cirque du Soleil’s ‘TORUK -The First Flight’ where he also played one of the lead characters from creation. Jeremiah is a highly dynamic mover with a diverse profile, who places great importance on storytelling in his craft. Currently, he is channeling his craft through the company he co-directs Ci Co.
You are about to enter a members-only zone.
To share this article on your CircusTalk member page and connect with circus professionals from all over the world, sign up now. It's free!
Sign Up
Already have an account?
Log in

Jeremiah Hughes is a director/choreographer, an actor, and an acrobatic dancer. During his career, he has had the honor of dance captaining multiple shows such as Cirque du Soleil’s ‘TORUK -The First Flight’ where he also played one of the lead characters from creation. Jeremiah is a highly dynamic mover with a diverse profile, who places great importance on storytelling in his craft. Currently, he is channeling his craft through the company he co-directs Ci Co.