<em>MLA</em> As a Resource for Circus Research 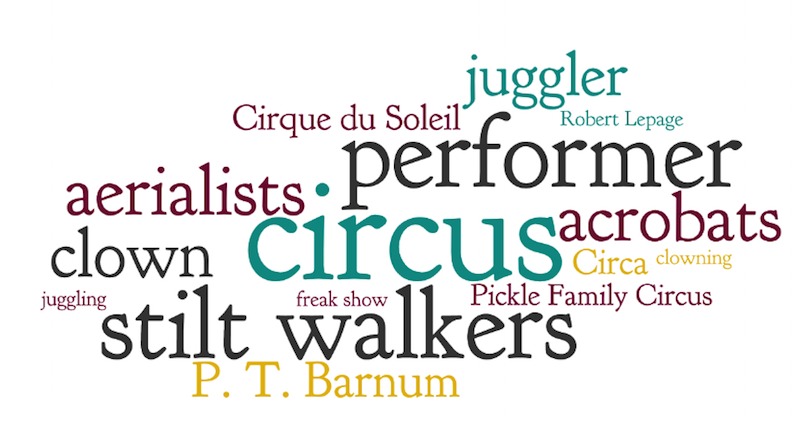 The MLA International Bibliography (MLAIB) may not be the first resource that comes to mind for circus scholars doing and sharing their research. This essential humanities research tool is better known for its coverage of modern languages, literatures, dramatic arts (theater, film, television, opera, and radio), folklore, linguistics, rhetoric, writing studies, and the teaching of all these subjects. So, it may come as a surprise to learn that the database also includes scholarly publications focusing on circus arts. Indexing for circus scholarship in the MLAIB is most commonly included as part of the Bibliography’s national literatures coverage and as part of its folklore coverage, though occasionally there are other categorizations for it, as well.

The Modern Language Association began publishing the Bibliography, originally titled the American Bibliography, in 1922. Following a decision to expand its scope beyond American scholarship in 1957, it became known as the MLA International Bibliography in 1964. Today, the MLA Bibliography is available online through subscribing academic, school, and public libraries, enabling researchers to find citations for the latest scholarship as well as publications dating back to the 1880s. Compiled by the staff of the MLA Office of Bibliographic Information Services with the cooperation of approximately 100 volunteer specialists called field bibliographers, the MLA International Bibliography contains citations to over 2.9 million scholarly publications, including print and electronic books, journal articles, and Web sites. Publications must meet certain criteria, including standards of form and content, to be included.

The MLA International Bibliography has a different scope for circus arts coverage than the more widely-used CARP–Circus Arts Research Platform’s academic bibliography. There are areas of circus scholarship that the MLAIB does not include, such as rigging and safety, circus training and education, and social circus. Rather, the MLAIB’s coverage focuses on circus as a finished work of expressive art, on circus as a tradition, on circus as part of cultural discourse, and even on circus language. As you may expect, theMLAIB  also covers works of literature in which circus is a theme. This can result in false positives when searching for records that focus exclusively on circus, but these results may be useful to scholars interested in interdisciplinary connections.

Another common way circus scholarship is categorized is as folklore. This normally occurs when there is a general discussion of circus as a tradition or as a practice. In other words, a publication may be classified as folklore when its focus is on circus in relationship to a cultural tradition, or it may be classified as folklore when the publication discusses the tradition of circus itself. For example, in the 1999 summer issue of Journal of Popular Culture, the article by Wendy Holland entitled “Reimagining Aboriginality in the Circus Space” appears in the folklore classification under folk rituals because it focuses on how the customary practices of circus are used.

Depending on the focus of the research, publications may also fall into two categories simultaneously. Joel Schechter’s 2001 book, The Pickle Clowns: New American Circus Comedy is categorized both as American literature (further described as theater) and as folklore because it discusses the ritual of circus—specifically the role of the clown.

There are some less-frequently-used classifications for circus scholarship, as well. In some cases, publications can be indexed within the Bibliography’s more general dramatic arts section, under discourse studies, or even in the linguistics classification, as when circus terminology is the subject of discussion. Tracy Ying Zhang’s article “BeyondVice & Vertu: Gender, Performance Body, and Precarious Labor at 375e de Montréal,” published in the 2019 March issue of Feminist Media Studies, is categorized as discourse studies because the article focuses on the cultural discourse on gender in Québec as it relates to the female body and labor practices for circus work. The MLA Bibliography also indexes some journal articles that focus on the lexicology of circus terms and are therefore handled as part of linguistics coverage. The journal American Speech carried two articles by Percy W. White that are categorized in this way. The first appeared in the 1926 February issue, and a follow-up appeared in the 1928 June issue. In the second article, “More about the Language of the Lot,” White invites readers “to delve a little further into the picturesque language of the trouper.”

The MLA Bibliography uses a controlled vocabulary, usually referred to as the MLA Thesaurus, to describe the contents of the publications indexed.  Subject terms within this controlled vocabulary are in English, so users will find documents about circus in many different languages even though their search term is in English. It is also helpful that the Bibliography’s search engine automatically returns results for singular and plural forms of a search term (i.e. juggler and jugglers), regardless of the form entered. Established terms may have non-preferred forms, and using a non-preferred term while searching the database automatically directs the search engine to the preferred term. For example, “trapeze artist” is considered a non-preferred term for “aerialists.” Searching for “trapeze artist” will return all results for “aerialists,” to ensure that users find all relevant results. The Bibliography has both established and candidate terms in its Thesaurus. In order to be established, a term needs to be used consistently over time in scholarly literature by specialists in a particular field. Examples of established circus terms include clown, stilt walkers, juggler, aerialists, and acrobats. Some candidate terms include lion taming, contortionists, and showman. With further review, these candidate terms can become established terms in the Thesaurus. The CARP–Circus Arts Research Platform bibliography contains many more circus search terms than the MLAIB. However, the MLAIB’s controlled vocabulary is open-ended. New terms can be proposed as candidates at any time, and these go through a thorough research and editorial process guided by the MLA’s Thesaurus staff before becoming established terms.

CARP’s academic bibliography has a much more extensive and focused listing of circus materials than can be found in the MLA International Bibliography, but there are several reasons why the MLAIB may be useful to circus scholars. Researchers will find that theMLAIB enables broad and targeted searches of records in its database, helping them to identify scholarly publications relevant to their areas of inquiry.

The MLA Directory of Periodicals, which is included with MLAIB subscriptions, is useful for scholars looking for journals and book series that may publish their work. The Directory of Periodicals provides information on over six thousand journals and book series that fall within the scope of the Bibliography. Scholars can do a search of the Directory using a broad search term such as “performance” to return a list of results for periodicals that include performance in their scope. These results can be further filtered according to the scholar’s interests, for example by searching “performance” and “women” or by searching “performance” and identifying the language field “French.” Alternatively, scholars can do a subject search for “circus” or a general search for a term like “aerialists” in the Bibliography itself and explore the publications that contain the articles cited.

Finally, circus scholars can submit their publications to the MLA for inclusion in the Bibliography. This allows circus scholars to share their research with scholars beyond the circus community. As you would expect, publications must meet specific inclusion criteria and be within the scope of the MLA International Bibliography. Submission guidelines and an online submission form can be found here. United States
Chriselle Tidrick is an aerialist, stilt performer, dancer, choreographer, and the founder of Above and Beyond Dance in New York City. She joined the Modern Language Association in May 2019 as Coordinator of Contributing Scholars Programs for the Department of Bibliographic Information Services, where she happily discovered that the MLA International Bibliography includes circus scholarship. She is grateful for the opportunity to share this information with the circus community.
Chriselle's profile
You are about to enter a members-only zone.
To share this article on your CircusTalk member page and connect with circus professionals from all over the world, sign up now. It's free!
Sign Up
Already have an account?
Log in

Chriselle Tidrick is an aerialist, stilt performer, dancer, choreographer, and the founder of Above and Beyond Dance in New York City. She joined the Modern Language Association in May 2019 as Coordinator of Contributing Scholars Programs for the Department of Bibliographic Information Services, where she happily discovered that the MLA International Bibliography includes circus scholarship. She is grateful for the opportunity to share this information with the circus community.