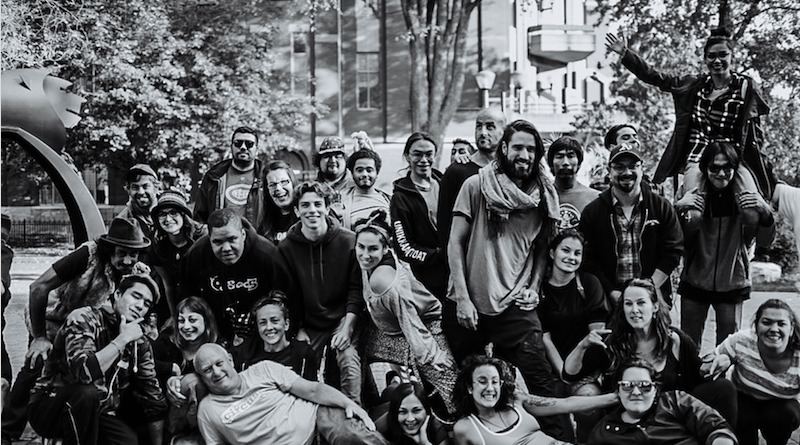 Are you looking for an event to warm your heart during the cold Montréal winter? From January 17th through January 19th, 2020 the circus city of Montréal will become the big top playground for  Cirkaskina- A National Social Circus Gathering. It will be the first event of it’s kind for Canada.

During Cirkaskina, 150 marginalized youth representing 17 different communities in Canada from Nunavut to Vancouver will use their voices and physical skills to build bonds, entertain, and ultimately create community, social change, and a group manifesto. Though the three-day event will be making its debut, the organization behind the event, Cirque Hors Piste, has twenty-two years of knowledge and experience accrued. They are a Montréal-based social circus organization that uses circus arts to propose an alternative path to personal development for marginalized or at-risk youth as part of the global movement of arts for social change. The organization focuses its interventions on improving the individual well being of participants and the collective well-being of communities.

This action-packed three-day event starts on the afternoon of January 17th with a scientific symposium (closed to the public)dedicated to communications, and scholarly presentations will occur. The symposium is funded by the Montréal Working Group on Circus Research, Concordia University, Jacinthe Rivard of the Université de Montréal, and Cirque Hors Piste.  This space will be an opportunity to discuss ongoing research about current practices and prospects for the renewal of social circus.

That evening there is a free public show of Cirkaskina at Tohu 2345, Jarry Street East Montréal. The general public is invited to discover the impacts of social circus’s pioneering approach that is used in the diverse communities in Canada. The event is open to everyone, but space is limited. On day two, January 18th, there will be an exchange of workshops and performances for and by the young people visiting at the  Conseil des arts de Montréal at1210 Sherbrooke St E, Montreal. On the third day, January 19th, the festival will wrap up with a circus performance jam and collective talk at Les 7 Doigts de la Main ( The 7 Fingers) Headquarters 2111ST Laurent Blvd Montréal.

This gathering of Cirkaskina- National Social Circus is unique in that it is supported by government, community and corporate partners including influential partners from the Montréal circus scene such as Tohu, la Caserne 18-30, Les 7 Doigts de la Main, le Cirque du Soleil, En Piste (as well as 16 national partners). In addition to these, this event was made possible with the financial support of the Government of Canada/Canada Service Corps program, the Secrétariat à la jeunesse (Government of Quebec), the city of Montréal, la Fondation du Grand Montréal and the Conseil des arts de Montréal.

You may wonder why an event this large focusing on youth is is being supported by such prestigious entities, and what effect it hopes to have on the people of Montreal and its participants. Jacinthe Rivard, social circus researcher, explained it well, outlining the impact of social circus back in 2018, “Such an approach puts forward the rationale of taking young people into account, rather than taking care of them. Social circus is driven by fundamentals and values ​​that remind us that it is the process that matters, not the outcome. A young person may never juggle four balls, but he or she will have experienced tolerance, perseverance, collaboration, imagination, and awareness of his or her boundaries; sometimes a boldness in relationship to their bodies.”

If you’d like to help promote social exchange and understanding among the Canadian youth and get involved /volunteer please visit Cirque Hors Piste.

Belinda Copeland is a maker of sorts ,an actor and activist who currently lives in Chicago. She dances as BellaDonna, performing tribal world fusion bellydance. She’s a drummer in Chicago’s all woman identifying and non binary Glam marching band Clamor & Lace Noise Brigade. She has graced many of Chicago’s stages in musicals, theater and improv. She holds a BA in Women’s and Gender Studies with minors in Theater & Psychology from Northeastern Illinois University. She has also studied abroad at the University of Erfurt, Carl Duisberg Centrum Berlin, and the Brecht Weigel Memorial Centre Berlin Germany and performed in theater, television and film while living there. She holds a certification of studies in Improv & Musical Theater Improv from ComedySportz Training Center Core Curriculum. In her free time she likes to hang with her smalls, write prose, short stories, and plays , read and play games.