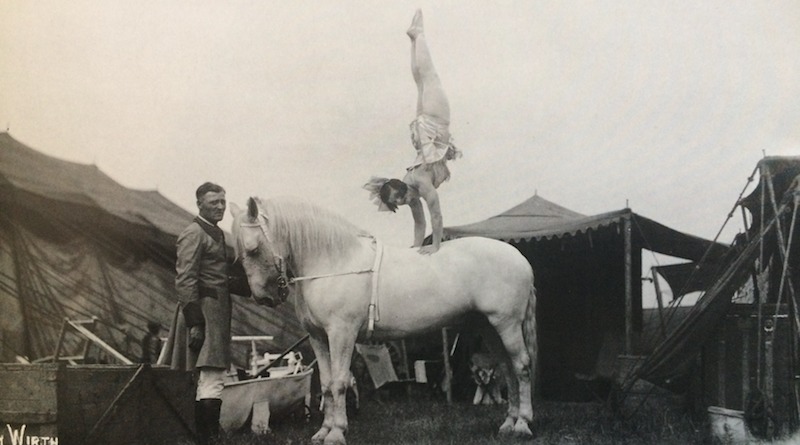 It is a precious opportunity to learn about and from circus from folks who have traveled with and performed in tent shows. Australian circus artist, mother and author, Simi Genziuk, is but one of those treasured gems and I got to interview her about her children’s book,“So She Did: The Story of May Wirth”, published by Affirm Press.  Her responses follow:

Please tell us about yourself.

I am a circus performer and emerging writer based in Byron Bay, Australia. I began training solo swinging trapeze with the trapeze master, Rodleigh Stevens in the early 2000’s. I became quickly and totally obsessed. I made a living performing corde lisse, tissue and lyra at festivals, nightclubs and corporate functions. I was contracted by Frank and Manuela Gasser the proprietors of Circus Royale, a traditional traveling circus. They are 6th generation circus family and touring Australia with them was a dream come true. I feel honored to have toured with them at a time when we are seeing a fast decline of traditional circuses.

In 2010 I married Shep Huntly. Shep is affectionately known as the Godfather of modern sideshow here in Australia. We joined forces and performed around Australia with The League of Sideshow Superstars and The Psycho Sideshow. I created a stunt called the reverse hair hang, I would hang upside down from the lyra and hang huge weights from my hair– In one season I even suspending a washing machine from my hair. This stunt was featured in the Ripley’s Believe it or Not book in 2015. My other stunts were more traditional sideshow strong women stunts (like ripping a phonebook in half) and for a few years I was billed as Australia’s Strongest Woman.

What inspired you to write a children’s book about May Wirth?

I am an avid reader and I felt it was important to pass that love on to my daughter. After my daughter was born, I discovered a pitiful amount of books available that included a female protagonist who wasn’t a fairy or princess. This motivated me to write about real life women who have done miraculous things. When I came across May Wirth’s story I was shocked to learn that most people didn’t even know who she was. May Wirth was strong, brave, and doing things that no other man or woman had ever done before. In the face of adversity May persisted and succeeded. She was well-loved by the public and her peers. I had to bring her story to light.

Tell us about the book.

The bookSo She Did: the Story of May Wirth, is a nonfiction picture book aimed at five to ten year olds. It features beautiful illustrations by Renee Treml, coupled with wonderful black and white photos of the real May to remind readers that although this story seems unbelievable it is in fact a true story. The photos give a sense of gravitas and base it in reality while the illustrations bring a sense of whimsical innocence to the story.

The book follows the story of May’s life from her humble beginnings to her years with Barnum & Bailey’s and Ringling Brothers’. “So She Did “ is a phrase I repeat throughout the book. When May is confronted with adversity or hardship she believes she can do it, she persists, and she wants to succeed, So She Did.

Why do you think May was a huge success in the USA but not Australia?

That’s hard to say. I know that traditionally men’s stories on the whole have been favored to that of women’s. Perhaps that has something to do with it. Hopefully my books can help change that and bring in to focus some amazing women who have been forgotten by history. Like May Wirth.

Why did you choose Renee Treml to illustrate your story over using only photos of May?

My publishers at Affirm Press and I chose Renee Treml to illustrate the book for the experience she has in creating Australiana illustrations and her history and love of horses. Renee’s beautiful illustrations bring a sense of whimsical innocence to the story making it more palatable for young readers. While the black and white photos provide a touch of reality, reminding us that as spectacular as it is, this is a true story.

As a circus artist yourself, would you share your thoughts around circus as a vehicle for developing persistence, tenacity, self-discipline and, courage?

It certainly takes all of those characteristics to be a successful circus performer. I think that those things already exist in circus folk, you simply wouldn’t make it otherwise. People who don’t possess those traits fade away. Circus people are some of the most ambitious, hard working people I know. For me personally, I had a passion for aerials and those qualities in me were a vehicle to help me achieve my goals.

What advice or encouragement would you give younger Simi Genziuk ten or even twenty years ago?

You’re better than you think. Don’t sweat the small stuff and consider doing a lower impact aerial routine, it doesn’t have to be so fast and hardcore. Your body will thank you later.

How do you feel we can best prepare our young females to follow their hearts and manifest their visions, unassailed by societal limitations / expectations of them?

By educating both boys and girls. That’s why I make a point of difference with this book. Sure, it’s a book about an inspiring young woman, but boys need to hear women’s stories too. So this is a book for children. Education is key. Bring stories of women to the forefront. Female astronauts, scientists athletes, they’re out there but you can’t be it if you can’t see it.

We have to break down harmful gender stereotypes and champion women. Circus is fantastic at that. It’s always been a leader in advocating for women promoting their strengths and treating them as equals, (well mostly).

I want to see more women’s circus history, documented and shared by women. If you could compile a “Who’s Who” of women in circus throughout the ages, who would you include?

There’s so many… where to begin?! I guess from the beginning.

Maria Speltrtini the first woman to cross Niagara Falls on a tight wire. She was also a bearded woman. Lillian Leitzel because I have a soft spot for aerial artists. She was famous for being able to do a hundred planges (planches) and died from a fall during a performance. Katie Sandwina was billed as the world’s strongest woman. She once defeated a man in the audience who happened to be billed as the world’s strongest man. She beat him in a competition by pressing 300 pounds above her head. He made it to his chest. Antoinette Concello triple somersaulted on trapeze. Lottie Brunn was the fastest juggler. I have a particular interest in Ella Zuila who was an Australian high wire walker, but little is known about her. I’d love to research her. Annette Kellerman is one of my favorites. I believe she is Australia’s answer to Houdini. She brought synchronised swimming to the world. Born with polio, her tenacity was unrelenting. There is a Warner Brothers movie based on her life called The Million Dollar Mermaid with Esther Williams.

In terms of modern-day circus women, I am more familiar with Australian women. Some of the women I look up to and admire for being at the forefront of the unique and challenging are:  Anni Davey, Jo Lancaster, Deb Batton, Hazel Bock, Olivia Porter, Sharon Gruenert, Chelsea Mc Guffin, Azaria Universe, Jess Love and Mel Fyfe.

Don’t sweat the small stuff and consider doing a lower impact aerial routine, it doesn’t have to be so fast and hardcore. Your body will thank you later.

Will you share trapeze and rope with your own daughter?

I am grooming my daughter to be a doctor. Just kidding. Our daughter has already appeared in our many shows in Australia and abroad in front of thousands of people. She was raised that way. She loves telling jokes, doing magic, acro balance and rope and tissue. She debuted in a solo act doing tissue at age five at the Tasmanian Circus Festival. Her father and I were very proud. Like my parents, I will support and encourage my daughter in whatever endeavors she feels passionate about. Right now that’s acting but one thing’s for sure, circus will always be a big part of our lives.

So she Did: The Story of May Wirth, (Affirm Press, $24.99) by Simi Genziuk and Renee Treml is available May 28, 2019. Visit Genziuk’s CircusTalk profile to find out more details about the book. Artist, Educator, LMT, BCTMB -United States
Johanna Vargas is a body worker and artist based in Chicago. She began studying circus arts recreationally in 2010, graduating from Aloft's first full-time program in 2014, and has been teaching body maintenance to subsequent full-timers ever since.
Johanna's profile
You are about to enter a members-only zone.
To share this article on your CircusTalk member page and connect with circus professionals from all over the world, sign up now. It's free!
Sign Up
Already have an account?
Log in

Johanna Vargas is a body worker and artist based in Chicago. She began studying circus arts recreationally in 2010, graduating from Aloft's first full-time program in 2014, and has been teaching body maintenance to subsequent full-timers ever since.