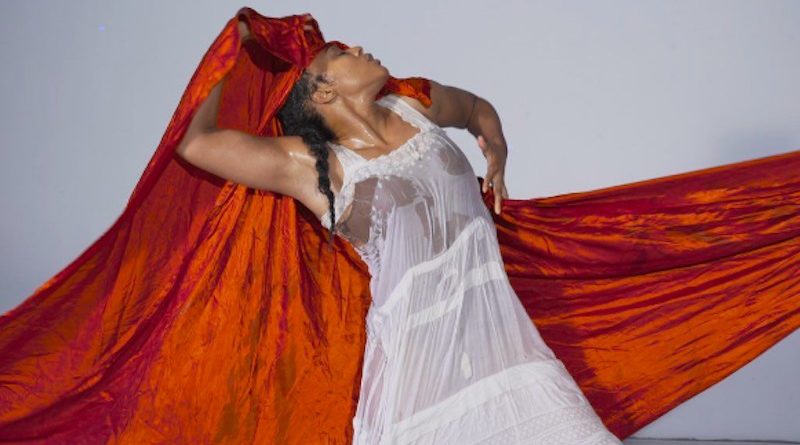 The Crown is a circus short film that follows a young black woman on her journey of self discovery. On her quest, she encounters five archetypes to self-mastery. These five archetypes are embodied by Summer Lacy, Copper Santiago, Darielle Williams, Susan Voyticky, and Shenea Stiletto.

Blair describes her motivation for making the film, “I was the recipient of a grant from Little Boxes Theatre here in San Francisco, California. Initially, I thought I would make an aerial video featuring myself… but that didn’t excite me. I wanted to do something more impactful. I eventually decided to create a showcase featuring female performers of African descent. My motivation was simply that I had never seen one before.”

We asked Blair to talk about the process of making The Crown. She explained, “Of course, we’ve all seen our fair share of virtual showcases during the pandemic, so I wanted to try and push the concept to the next level. Ultimately I came up with a main character (played by myself), who is on a journey of self-discovery. The performances in the film are arranged in a way that correspond with what the character is experiencing, turning each performer into an important figure in the evolution of the main character. I also decided to leave the story open just enough to let the viewer interpret what’s happening for themselves.”

Blair’s warmth comes through when describing the metamorphosis of this labor of love, “What started as a virtual showcase, turned into something very beautiful and moving. I hope that viewers will find something to be inspired by. Whether it’s Summer Lacey’s impressive aerial chains performance, the fierceness of Darielle Williams, or the journey of the main character.”

We asked Blair to chose an artist from the film to discuss their act with. She chose Summer Lacy:

Veronica Blair: What inspired you to create this act?

Summer Lacy: The original piece was inspired by Mayan culture and the reverence for ascension through sacrifice. With The Crown, I had a chance to recontextualize that act about a different kind of freedom, still born of sacrifice, but with a very different context. I knew I had the opportunity to create a unique piece of art, showcasing performers’ work within the context of a greater narrative, all while working with talented women I love and admire.

VB: How do you feel about how your act was used in the story?

SL: I love the way the different acts give context to the overall story. Combining my act with the others really re-contextualized it and made it something fresh and new. When I saw the final cut I knew I was a part of something special.

VB: How do you feel about the film as a whole?
SL: It’s a singular cohesive piece in that there’s a beginning, middle and end, but each part showcases a different act. Virtual showcases are a part of life in quarantine, but I haven’t seen a one that puts everything together with such a cohesive overarching narrative. It’s really unique, powerful and different from what I’ve seen before. Performer, Writer, Marketing Intern -United States
Lydia is a Sailor Circus graduate currently based in Florida who was featured in the 2017 Smithsonian Folklife Festival. She is attending Florida State University, pursuing an undergraduate degree in Media Communication Studies and Spanish as well as performing with the FSU Flying High Circus. Her disciplines include swinging trapeze, flying trapeze, and Spanish web. Lydia is happily a part of the CircusTalk team as a social media marketing intern, combining her love for media and all things circus.
Lydia's profile
Kim Campbell

Editor-in-Chief at CircusTalk.News, Writer -USA
Kim Campbell is the editor of CircusTalk News. They have written about circus for Spectacle magazine, Circus Now, Circus Promoters and were a resident for Circus Stories, Le Cirque Vu Par with En Piste in 2015 at the Montreal Completement Cirque Festival. They are the former editor of American Circus Educators magazine, as well as a staff writer for the web publication Third Coast Review, where they write about circus, theatre, arts and culture. Kim is a member of the American Theater Critics Association.
In 2019 as editor for CircusTalk News, Kim was on the jury at el Festival Iberoamericano de Circo (FIRCO) and presented the first CircusTalk Critic's Choice Award.
Kim's profile
Veronica Blair Aerial Performer, Coach, Choreographer, Documentarian -United States
Veronica Blair is a professional aerialist with over 15 years of performing and teaching experience. She is currently Aerial Director for Celebrity Cruises Entertainment

Expanding her portfolio beyond performing, Veronica launched the development of “The Uncle Junior Project” in 2010. The ongoing documentary shines a light on the careers of African-American circus performers, including Emanual “Uncle Junior” Ruffin who remained largely uncredited for his contributions to American Circus until after his death. In 2017, she was invited to speak at the Smithsonian Folklife Festival about her experience as producer and director of “The Uncle Junior Project”, and served as organizer and moderator on a panel highlighting the African-American circus experience. She’s also worked with the African-American Art and Culture Complex to stage "Entrapment to Entertainment: A Celebration of Blacks in American Circus", a three-month exhibition that ran from October, 2013 – January 2014 with over 1,000 attendees.
Veronica's profile
You are about to enter a members-only zone.
To share this article on your CircusTalk member page and connect with circus professionals from all over the world, sign up now. It's free!
Sign Up
Already have an account?
Log in

Lydia is a Sailor Circus graduate currently based in Florida who was featured in the 2017 Smithsonian Folklife Festival. She is attending Florida State University, pursuing an undergraduate degree in Media Communication Studies and Spanish as well as performing with the FSU Flying High Circus. Her disciplines include swinging trapeze, flying trapeze, and Spanish web. Lydia is happily a part of the CircusTalk team as a social media marketing intern, combining her love for media and all things circus.