Oh, Grandma, What Big Eyes You Have! 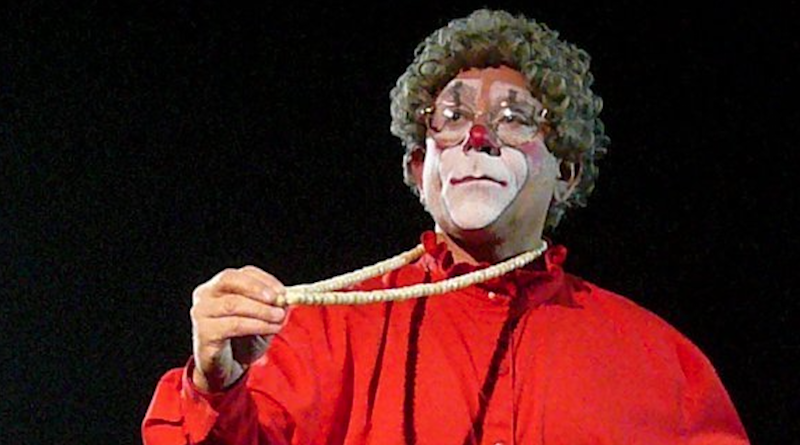 Full disclosure: the victim of this story is the same age today as I am.

Full disclosure: I am a circus teacher, working with kids her age and younger.

Full disclosure: when I was 16, like her, I was taken advantage of by a man who was my mentor, teacher, and one of my personal heroes.

Waking up to the New York Times’ exposé of Barry Lubin (AKA the beloved Grandma of Big Apple Circus) having admitted to taking pornographic photos of a 16-year old teenage girl was devastating on multiple levels. I have spent the better part of that day trying to wrap my head around the hurt I was feeling, the shock, the sickness, the betrayal, the anger, and grief.

I want to be clear: no industry is clean of men who abuse their power. In every environment where a person wields authority over another, there will be those who grow corrupt with that power and forget what decency means.

And yet, somehow, I forgot this applies to circus too. That we have power dynamics in our industry, that we have powerful men, and that these men – due to the unique nature of circus – sometimes work closely with youth.

Perhaps it was no coincidence that the first article I read that day was the New York Times article about Mr. Lubin, and the last I read was the New York Times coverage of Larry Nassar’s sentencing. No, I am not comparing the scope of what each of these men did, but yes, I see similarities between the industries they are active in, and in the trust their victims had in them, which they took advantage of.

Circus, like gymnastics, is a highly competitive, closely physical field in which young people are trusted to the care of older figures who are often role models for their disciples. Parents trust us with their child’s body, mind and spirit.  Families deposit their most precious possession in our care and we accept the sacred mission of bringing the joy and the magic of circus into their lives.

This is where I think our industry differs from all others; from that of movies, stand-up comedy, gymnastics, food, lawmaking, politics, business, media; this is how we differ:

Circus people are the keepers of wide-eyed wonder. We are the torch bearers of the magic of unadulterated joy, of carefreeness, of childhood.

We create these possibilities in tents and on stages, but we also create them in classrooms and gymnasiums, working closely and hands-on with children and teens. In our industry, children are not just viewers on the outskirts, they are active participants. Circus people are in close contact with children, such as in youth circus conventions and camps; and circus people are there in sensitive, vulnerable situations, such as when medical clowns visit children in hospitals or social circus practitioners teach at-risk children. There are so many opportunities for us to make a change for the better; to raise not only the next generation of circus, but the next generation of humans who will look at life through the lens of the values circus has taught them: camaraderie, teamwork, determination, perseverance, hard work, creativity, trust.

It is an honor to be trusted with a child’s growth. It is also a position of power, and with that power, as the saying goes, comes great responsibility.

Mr. Lubin had a lot of power and responsibility:

He had the responsibility of headlining Big Apple Circus, the New York institution that went bankrupt and miraculously re-emerged for its first season under new management, a risky and fragile undertaking that had to be met with the best efforts possible.

He had the responsibility of bettering the image of clowns, an archetype so often feared and misrepresented that his Grandma was frequently used by circus practitioners to counter that wrongful image as a shining example of a beloved, non-threatening clown.

He had the responsibility for Grandma, his own character, his legacy, inducted into the Circus Ring of Fame and starring on the walls of many-a-child’s bedroom.

He had the responsibility for every child – generations of them – who admired Grandma, who laughed at her antics, who looked at her starry-eyed, who were held in her arms as they flew around the sawdust stage of the Big Apple Circus.

He had the responsibility for one young girl who came to him dreaming of a circus career and, having been violated by her idol, left feeling confused, lost and ashamed.

Growing up in another country, I have watched videos of Grandma long before I even thought of moving to New York or had dreams of joining the circus. When I finally got to see her live for the first time, not a month ago at Lincoln Center, I felt privileged to be in that audience. I leaned over to my husband and whispered in his ear: “We are witnessing a living legend”.

I now know that this living legend has abused a young girl to the point of crushing her circus dreams, to the point where she felt she had to run away, not to the circus but from it. She trusted him, and he abused this trust in the most vile way imaginable. He shrugged off not only his responsibilities to the images of Grandma, clowns and the Big Apple Circus, but his responsibility as a mentor, role model and adored figure to children everywhere – his victim most of all.

This is no Grandma.

This is a wolf in Grandma’s clothes.

To discover this has been devastating, but necessary.

I keep going back to one speech comedian Sarah Silverman made in light of her friend and colleague, Louis CK’s, sexual assault of women in his field. It rings true as I think of Mr. Lubin, of Grandma, and of the discrepancy I feel at all of this.

Silverman compared the calling out of sexual assault stories to that of cutting out tumors: “It’s messy and it’s complicated and it is going to hurt, but it’s necessary, and we’ll all be healthier for it.”

And to paraphrase on Silverman’s words – it’s a real mindfuck– because I love Grandma. But (the man behind) Grandma did these things. Both of these statements are true.

Our focus should be on the power dynamics in our industry and on the youth deposited in our care. We need to focus our energy and efforts on making sure no child is ever taken advantage of, and that no person feels so powerful that the rules don’t apply to them.

No matter how revered someone is, no matter how beloved and adored and held high, they are not exempt from repercussions. Every person needs to know that they will be held accountable for their actions, that they are not excused, and that no reprehensible action will remain a secret.

In circus and everywhere.