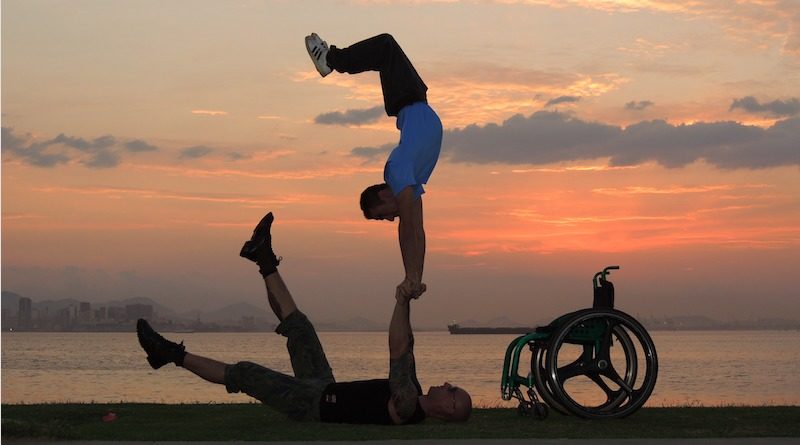 In an age when most circuses are folding up their tents, a new circus is emerging to fill the gulf in the United States. Omnium Circus is getting its start in an odd way, online–at an odd time– during the height of a pandemic. But who can blame them really? It is a time in the United States devoid of fun for many, and short on inclusion for even more, and Omnium hopes to bring all of that back into fashion with the magic of circus. The show will debut on December 12th online. Lisa B. Lewis describes this circus with all of the vigor of a ringmaster,  “A bold new circus rises from the pandemic as a fresh idea whose time is now! A celebration of uniqueness, strength, spirit, diversity and talent including full access, both in and out of the ring. Circus reimagined!” When I asked Lewis if the style of circus would be traditional or contemporary, she said “You guys figure out the label…. My goal is to create the best show possible with the circumstances we have.”

Behind this circus is an experienced team of people who have worked with the biggest and best companies in the United States over the past few decades, starting with Lisa B. Lewis whose background is with Big Apple Circus. She started as a clown in their hospital program, but her sunny personality soon opened up other doors for her with the company. She soon began to volunteer with Circus For the Senses (performances specifically adapted for those requiring an access bridge in order to enjoy the show such as sensory modification, audio description or ASL.)

“Over time, this mission spoke to me more and more… I became the program coordinator and eventually the director of community programs. I am forever grateful to Paul Binder, Alan Slifka and the Big Apple Circus for this idea and for the honor of carrying it forward to new heights,” says Lewis.

When The Big Apple Circus declared bankruptcy in 2017, Lewis says there was a mandate in the charter to maintain the community programs work of the circus company. Lewis started CircuSense LLC, a fiscally sponsored project with the express mission to continue the work of community programs. “Then,” says Lewis, “came Covid. Big Apple Circus made the difficult decision to terminate all employees and cease operations for the foreseeable future.”

Lewis is not one to keep idle for long. She soon started dreaming up other ways to produce circus that was accessible to any audience. She says, “I started this thinking we would have a live show after the pandemic. It was during a conversation with a former Big Apple board member who opened my eyes to the virtual world. Every thought or idea led to a do list which invited more ideas and more possibilities.”

This led her to start Omnium, but she didn’t go it alone. She describes her dream creative team, “Director: Mark Lonergan, Composer: Peter Bufano, board of directors and advisors include Johnathan Lee Iverson, Jessica Hentoff, Jen Bricker-Bauer, Siri Horowitz and Joe Lara. The ground team is led by Chris Palm, Cheryl Jones, and Noe Espana.”

The list goes on, Lewis says, “Never underestimate the PR brilliance of Alan Miller or the creative marketing minds which kicked us off–Joe Gold and Mark Thompson. The development brain of Karel Karpe, the access capability of Disability Unite…the council and support of Circus Talk. Creative ideas come in all ways. Omnium is a truly collaborative process.”

We celebrate our diversity and invite the world to do the same.

Lewis’ motivation comes from her years in the business working next to talented artists who she credits with showing her the way, “As with most artists and circus performers– we adapt, we grow, we create.” But she doesn’t stop at simply adapting– because seeing the United States go through a pandemic and political unrest was a big motivation for Lewis to return to the roots of the circus family history of inclusiveness, which emphasizes togetherness. She adds, “Then came the much-needed action surrounding the “outing” of the atrocities of systemic racism. It became obvious that this is an idea whose time had come. We all gathered, an incredible team of many talented people from all different circus backgrounds. Over the next months, we brainstormed, created, adapted, listened to the pulse of the world…”

Diversity and Accessibility is Where It’s At

Coming from a circus background where inclusiveness and diversity are part of the mission, Lewis knew she had to keep that mandate alive in her future work, saying “For each of us who models success and accomplishment in our ring, there are hundreds and thousands of people who look like us, feel similarly, (who) face similar circumstances. Our resilience and strength can set the example and inspiration for the rest of the world to follow. We celebrate our diversity and invite the world to do the same.”

How does Omnium circus plan to make their circus accessible and diverse? By including a wide variety of artists from different backgrounds and by making their show highly accessible.

“Omnium means ‘of all and belonging to all’… we welcome all people! …We own the responsibility to provide all access bridges so no one is left behind!” In addition to accessible style formatting,  they will offer a comprehensive study guide that includes both the STEAM curriculum and a diversity and inclusion curriculum. This study guide will include some of the research Veronica Blair has done with the Uncle Junior Project. Lewis says, “We are able to stream into schools across the nation with the same ASL, audio description, captioning and simple language format. We are the embodiment of that which we are teaching. A celebration of diversity. Omnium builds bridges!”

The plan with Omnium  is to provide regular performances online until they are able to transition the shows to live in person events, the ideal setting for circus. Lewis describes the vision, “We teamed up with the Disability Unite festival in NYC and are currently in the planning phase to figure out a 5 borough tour for next summer, or whenever the pandemic allows…We are reaching out to kindred spirits in both organizations and foundations to solidify the business side of things,” adding “Anybody reading this who might have a great idea, please email me. I anticipate we will be a hybrid of live and virtual for the foreseeable future.”

Lewis has faith that this new circus will be a success because of its unique approach of inclusion at a time when the United States needs a message of  hope and some proof that differences can be overcome and celebrated. She says, “We welcome ALL people! Everyone who enjoys circus, YOU, your family, your cousins, your friends, even your enemies– we all share a core love!”

The first Omnium show will take place in cyberspace on December 12th, and tickets are for sale on CircusTalk with a price range to suit every budget.

Audio reading of this article: