Performers of the Past; A Proud Legacy–Lulu Adams 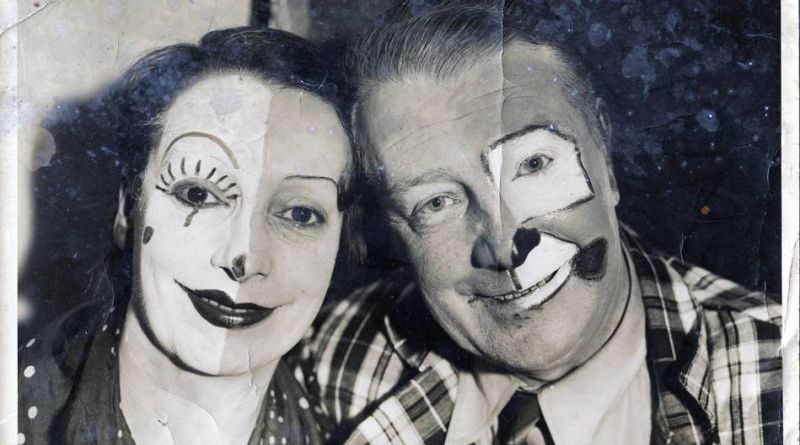 Lulu Adams was born Louise Craston in 1900 to Joe Craston and Martha Cashmore. Lulu was born into a family with a long standing tradition in the circus and variety scene. Her grandmother was the first tightrope artist to perform at the Brighton Hippodrome. Her mother was an acrobatic equestrian, wire walker and dog trainer. Her father was singled out by Lord George Sanger at the age of 9, to be made the central figure and youngest solo clown in his circus. Although Joe also performed as an acrobatic rider for some time, he eventually devoted himself to clowning after numerous accidents took a toll on his body.

Lulu made her debut in Russia at age 12 with her sister Victoria and from that time the duo became a popular musical act in the variety theatres of England and Europe. Her aptitude for clowning developed early in life and she appeared many times with her father in clown entrees.

Lulu was artistically talented as a designer and craft woman and musically talented on the clarinet, saxophone, cornet, drums, piano, violin and bagpipes, as well as an excellent singer, actress and dancer. She also spoke French, German and had a fair knowledge of five other languages.

Lulu became one of the earliest female clowns to appear in some of the most renowned British circuses of her time and the first woman clown to appear at Olympia. Lulu’s circus career took her all over the world. She worked with Barnum and Bailey’s in the U.S.A., Tom Arnold’s Christmas Circus at Harringay, Bertram Mills Circus, Hengler’s and The Ringling Circus, to name but a few, before retiring in 1962.

As far as Lulu could remember, her life was one of continual work and practicing music, dancing, singing and acrobatics. For a period Lulu was part of ‘The Three Crastonians’, a Scotch musical act which was performed in traditional kilts by her and her two siblings Vicky and Joe. While travelling this act in 1927 Lulu met Albert Victor Adams, who soon after became her husband. Albert was a theatre manager and clown performer and Lulu decided to stop her career in variety to focus on a clowning double act with him, known as Albertino and Lulu.

Lulu and Albertino, appeared with Bertam Mills Circus, at The Blackpool Tower Circus and with Tom Arnold’s Mammoth Circus, amongst others. In 1939 they were in the United States where they hoped to spend the rest of their careers, but at the break of World War II, Albert, who was in the reserves, was called up and had to return to the UK.

Albert was an experienced soldier who served in the Great War as a Major. His military service in this instance ended when he was discharged on health grounds after being gassed by enemy forces. On their return to England, Albert was turned down for service, however this did not stop the couple from contributing to the war effort in the best way they knew. For a while, Lulu worked as a nurse for the Red Cross, padding crutches and splints, while Albert went on a tour of military stations. Later Lulu and Albertino reformed their act and entertained the troops, as well as factory workers and evacuated children, while also appearing in a miniature circus in a small zoo in Chessington, Surrey.

Lulu and Albert were married for 20 years, until Albert died suddenly in America from heart failure while they were both broadcasting on a New York radio programme on April 6th,1948.

Lulu was a very creative and talented person and made her own costume designs, many of which were for the Windmill Theatre, just off Piccadilly, London. She also made dolls out of felt, scraps of fabric and odds and ends of jewellery, which she sold and made on commission. She started this activity as a hobby during the war to give as gifts, as ready-made presents were scarce, and later it became a way to top up her income. She also enjoyed painting and drawing and every year she would make her own Christmas cards. Lulu spent the last years of her life in Brighton with her sister Vicky running a bed and breakfast and selling art materials and dolls.

Learn more about Lulu Adams by visiting the Collection in the National Fairground and Circus Archive. National Fairground and Circus Archive Collections Manager -United Kingdom
A graduate in Fine Art, specialised in Painting Restoration and Masters in Museum Studies, Arantza has worked in the heritage industry for over 16 years, both in the museum and archive sectors. In early 2015 she was appointed Collections Manager at the National Fairground and Circus Archive at the University of Sheffield, where she is currently developing all aspects of collections management including collecting practices, content development, data management and access.
You are about to enter a members-only zone.
To share this article on your CircusTalk member page and connect with circus professionals from all over the world, sign up now. It's free!
Sign Up
Already have an account?
Log in