Philip Astley and the First Circuses; A Very British Institution 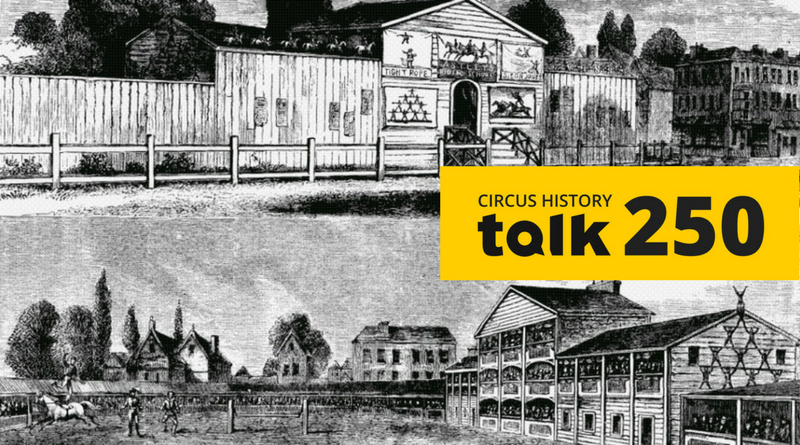 Here is a challenge for you – stop anyone in the street and ask them if they know what a circus is and you will get some form of definitive answer. There are very few who have no understanding of what a circus is, irrespective of their opinions. Circus seems to be rooted deep within our culture. We all share a common psyche; circus exists in our subconscious. Circus imagery is around us everywhere; from brightly coloured circus posters to advertising motifs on television, the circus is with us. It has been written about in literature; it has been a source for some of the great artists; it has been the subject for many films; it appears on postage stamps and other ephemera; in children’s toys and games; in graffiti; in schools and libraries. It has even infiltrated our very language. How often do we hear of juggling the finances, walking a fine wire, clowning around, and putting one’s head into the lion’s jaw? On the other hand, the word is frequently used in a pejorative way to reflect something chaotic and anarchic. But this in itself reflects just how much the circus has ingrained our society across the years. It seems that the circus has been with us forever but the circus, as we know it today, is a relevantly modern creation.

So here is another challenge. Stop anyone and ask them if they know who Philip Astley was. This time, I am sure, you will get a very different response. Very few people are aware that Astley is considered to be the founding father of the ‘modern’ circus; and I’m not just talking about people in the street. I have come across many performers and students who have no idea who Astley was or the contribution he made to the development of the circus. Some may argue that it is not necessary to know who he was; that he is not relevant to today’s circus. This may be true but I maintain that history is the block upon which we build for the future. How can you know where you are going if you don’t know where you have come from? In this 250th anniversary year of Astley’s first performance on the bank of the river Thames in London, I think we should pause and give him the recognition that he is due.

So who was Philip Astley? Popular history tells us that he was born on January 8th 1742 in Newcastle under Lyme, Staffordshire. However, we know that his parents married in Manchester the year before and there is some evidence to suggest that Philip may have been born there. By the mid- 1750s the family had moved to London, and Philip was apprenticed to his father, a cabinet maker.

The eighteenth century was a period of confusion and volatility; Britain was involved in military conflicts on many fronts and in 1759 became involved against the French, in what is known as the Seven Years War. With his passion for horses, Philip Astley left home and was one of the first recruits to join the newly formed Colonel Elliot’s Light Horse. He went on to serve with distinction and rapidly rose through the ranks to become a Sergeant Major of Horse. He took his discharge in 1766 and returned to London.

So what does an ex-cavalryman do with his life? Now married and with a young son, he returned briefly to cabinet making but found this dissatisfying. At that time in London there were exhibitions of haute école and trick riding and Astley would have seen these. He may have even known some of the presenters, and I believe that this may have inspired him to take that step towards presenting his own shows.

In the spring of 1768 he did just that. He leased a plot of land, called Halfpenny Hatch, on the south bank of the river Thames in London and erected some hoardings. He pegged out a circular ‘ride’ and, and along with his wife Patty, he charged people to watch displays of haute école , military, and trick riding. He never used the word ‘circus’ and he never called his performance area the ‘ring’; that would be for others to name.

His performances were very popular, made more so by the flamboyant self-promoting that he did. It is recorded that he was able to take around 40 guineas in one day (approximately £1000 today). It was not long before he was able to move to another site, at the foot of Westminster Bridge, on the opposite bank to where the Houses of Parliament now stand. Here he built a new riding arena and, aware that people wanted to be entertained by more than just horses, added other acts such as a strong-man, a rope-dancer, and a clown to his equestrian displays. By 1778, he had made enough money to be able to roof his amphitheatre, and it became known as the Royal Grove Amphitheatre.

Popularity often breeds fame and rivalry. While Astley’s company was performing in Paris at the invitation of the French royal family, one of his workers, Charles Hughes, left to set up his own company. Astley was incensed and a bitter rivalry grew between them. Falling foul of the licensing laws in London, both companies were forced to go on the road. Astley toured Britain and Ireland; Hughes went to Europe and reached as far as Russia.

In 1782, Hughes returned to England and built his Royal Circus Equestrian and Philharmonic Amphitheatre, only a short distance from Astley’s Amphitheatre. This became popularly known as the ‘Royal Circus’ and the rivalry continued unabated – but good for business. People either went to Astley’s or to the ‘Circus’ – and it is from here that the term circus is derived. Equestrian displays, by both men and women, were still the bedrock of the performances but now rope-dancers, leapers (gymnasts), feats of strength, stilt walkers, clowns, and dramatic burlettas were now all part of the shows.

By the early nineteenth century, ‘circus’ had spread throughout Britain. Most large towns and cities now had semi-permanent amphitheatres; hastily constructed wooden buildings capable of seating many thousands. There were also many entrepreneurs who set up their own companies. Circus was also spreading across Europe and the world. Astley had traveled widely, as far as Belgrade, and amphitheatres were built in his wake. In Paris, he opened the Amphitheatre Anglais, which he later relinquished to Franconi during the Napoleonic wars; the founding of the French circus tradition. Catherine the Great of Russia had been so enthused by the performances of Hughes that she ordered three amphitheatres to be built; the founding of the Russian circus. In the newly formed United States of America, John Bill Ricketts, a former employee of Astley, had arrived in Philadelphia with his stud of horses and immediately built an amphitheatre – he went on to build at least seven across America; the founding of the American circus. Circus soon arrived in Australia and then New Zealand. In fact, as the British Empire grew, circus spread even more widely. From that small plot of land on the banks of the Thames known as Halfpenny Hatch, circus became an international phenomenon. The circus really is a very British institution.

So what claim does Astley have in being the father of the modern circus? First and foremost, he was a natural showman and an entrepreneur. He was not a reserved man and almost everything that he did was with ostentation. He was arrogant, egotistical, bombastic, and had a firm self-belief in everything that he did. Astley was also a great imitator and he was not afraid to take someone else’s ideas and develop them into something bigger and better to suit his own purpose. It was this ability to develop ideas into a new style of popular entertainment and to place that within a purpose built venue before a paying audience that gives him the accolade of being the ‘founder’ of the modern circus. All of us involved in the circus, in whatever capacity, should raise our hats to Philip Astley in this 250th anniversary year. Writer, Educator, Historian -United Kingdom
Steve Ward has a background in theatre and clowning.  He has created and directed many youth circus festivals in the UK, as well as in Germany and Brazil. He has a PhD in the social and cultural history of the circus, and is a member of the Circus Research Network and the Circus Arts Research Platform. To date, he has written five books and many articles on the subject and is currently working on his next book looking at ethnic diversity and representation in the Victorian circus. Steve also lectures on aspects of circus history and has appeared on television and in many radio interviews. He also advises on educational and youth circus matters – and he still finds time to occasionally perform as a clown! Further information on Steve at www.steve-ward.net
Steve's profile
You are about to enter a members-only zone.
To share this article on your CircusTalk member page and connect with circus professionals from all over the world, sign up now. It's free!
Sign Up
Already have an account?
Log in

Steve Ward has a background in theatre and clowning.  He has created and directed many youth circus festivals in the UK, as well as in Germany and Brazil. He has a PhD in the social and cultural history of the circus, and is a member of the Circus Research Network and the Circus Arts Research Platform. To date, he has written five books and many articles on the subject and is currently working on his next book looking at ethnic diversity and representation in the Victorian circus. Steve also lectures on aspects of circus history and has appeared on television and in many radio interviews. He also advises on educational and youth circus matters – and he still finds time to occasionally perform as a clown! Further information on Steve at www.steve-ward.net

In breaking news, Cirque du Soleil is hosting a new vaccination site. This development offers more hope to the performing…