Physical Theater Festival Chicago Opens Up to Circus Programming in 2019 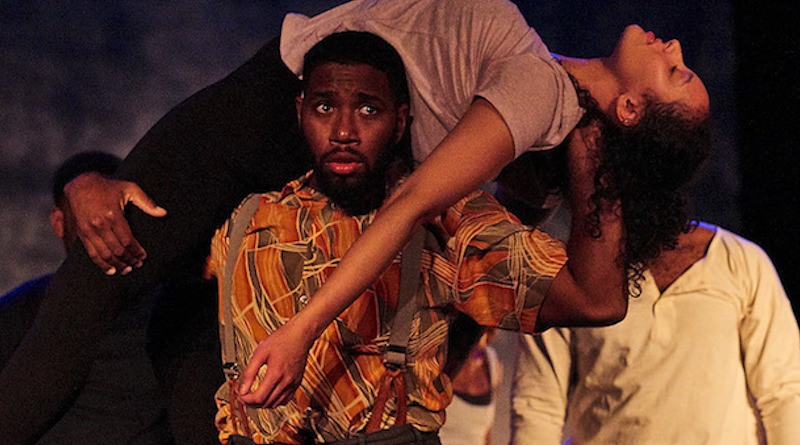 It will be the 6th year for Physical Theater Festival Chicago (May 31st–June 8th, 2019), and as in previous years, they are bringing acclaimed international shows to the Chicago stage, but this year there is a twist–they are beginning to feature circus as well. This is perhaps a natural progression, as contemporary circus is indeed a form of physical theater, and the demise of the Chicago Contemporary Circus Festival in 2016 left a gaping hole in the international touring route for many circus companies looking to engage with midwest festival audiences. We had a chance to speak with co-founders Alice da Cunha and Marc Frost, but first, the line-up:

This year’s mix of shows is a diverse blend of the best of international physical theater. The shows with the most circus elements are: Helga  by Kallo Collective (Finland)–explores the life of a diva extraordinaire told using mime, clowning and circus skills, A Life With No Limits  by Aura CuriAtlas (USA)–inspired by the work of astrophysicist Stephen Hawking told through dance, theatre, and acrobatics, and  Eventide by 3AM Theatre (USA)– a multidisciplinary show by juggler Kyle Driggs and dancer Andrea Murillo that meld expressive movement, object manipulation and surreal setting to expose the challenges we face in romantic relationships and relationships with ourselves.

Other programming includes: Next Door by Out of Balanz (Denmark, Finland)–blends storytelling and physical comedy to help us understand what connects us all, The Raveling  by Walkabout Theater Company and Guild of the Goat (US/Canada/India)– bills itself as “an avant-garde family history drama that teases apart the knotted expectations of coming together for dinner,” and The Gift  by Angela De Castro (Brazil/UK)–a heart-rending yet simple tale of a clown waiting for his new date to arrive.

The show stopper at this year’s Festival is Freeman  by Strictly Arts (UK) a critically acclaimed sold out show from the Edinburgh Fringe Festival, which will debut in the US, threading together six true stories, told through physical theater, spoken word, gospel singing, and shadow puppetry. It’s the story of William Freeman, a black man driven to violence in the US. Together with David Oluwale, Sarah Reed, Sandra Bland, Daniel M’naghten and Michael Bailey, they explore the unspoken link between systemic racism and mental health in the US and UK. Last but not least, there’s ​Tic Tac Tock  by Mrs. Flower (Belgium/UK)– a free show for families and children of all ages and abilities. It is accessible, sensory-friendly, inclusive programming. Best of all, it’s a musical clown show.

Over the course of this ten day festival, artistic companies offer workshops for local physical theater actors, dancers and circus artists as an opportunity to meet the brains behind the shows and share skills with the local community.

Festival Passes and Workshop passes are available as well as student, senior, military and industry discounts. For 2020, Physical Fest Chicago is already accepting submissions for the festival with its deadline being October 18th, 2019.

Here is what da Cunha and Frost had to say about this year’s Festival:

In this 6th year, you are adding a bit of a circus influence to the festival. Do you see this as something you want to include in future years as well? If so, why?

Yes, we are absolutely committed to bringing more circus acts to Physical. We are always excited to build bridges with communities with overlapping interests. And clearly there are many acts and shows that we would consider physical theater that could also be categorized as circus as well. Plus, when we started the Festival, there was a wonderful festival called the Chicago Contemporary Circus Festival (which brought in top-notch acts from around the world!) and we would like to see that effort continued here in Chicago. One thing we are considering is to offer a “circus slot” in our Festival and to work with guest curators to help us program that slot.

Do you have any other new features this year?

Yes, we have several new features this year! The first is our Fresh Series, which is intended to serve as a launchpad for physical theater companies to try out something new and untested but that is closer to a full-length piece (as opposed to the Scratch Night where local artists have about 5-10 minutes to share new material.) This year’s Fresh Series will allow local company Walkabout Theater to collaborate with a company from India to present a full-length piece in a newly added late-night slot. The show is called The Raveling and is priced lower than the other shows.

The second new feature is that we are collaborating with Brittany Price Anderson, founder of the long-running physical theater cabaret Heels Over Head, to curate and produce this year’s Scratch Night. Brittany has volunteered with the Festival from the very beginning and a few years ago she established her own monthly cabaret. We are thrilled to have her collaborating with us this year! Another interesting addition is that we will have a panel discussion called the International Touring Talk, which will focus on the logistics and meanings behind touring theater internationally, something our Festival has been facilitating for the past six years.

Is there a show geared towards all ages?

Perhaps the most family-friendly shows this year will be The Gift by Angela De Castro and A Life With No Limits by Aura CuriAtlas Physical Theatre. Both of these shows are essentially wordless, which makes them very approachable for all ages audiences. The first one is a family-friendly comedic show featuring a world-renowned clown. The second one employs incredible group acrobatic feats to silently portray the life story of Stephen Hawking.

Is there a show that feels especially relevant to the times?

Two in particular stand out. They happen to be our opening and closing acts. The former is Next Door by Out of Balanz, which is the first show we have ever brought back to the Festival due to its popularity the first time around. While it first played in 2014, it seems even more relevant today. Without giving too much away, it is a beautiful and fun story about the borders that separate us and what makes us all human. The other show is Freeman by Strictly Limited Arts, which involves a large, diverse ensemble weaving together stories of mental health, systemic racism and the criminal justice system employing an explosive form of physical theater. We really can’t wait to see this one in person, apparently there were lines around the block to see it this summer at the Edinburgh Fringe Festival.

What workshops are you excited about?

It’s hard to choose, because we love all the artists so much! If we had to pick two, we would encourage folks not to miss out on the chance to work Angela de Castro, a world-renowned clown and Kallo Collective’s workshop since it is one of our first circus-related workshops that we have ever offered.