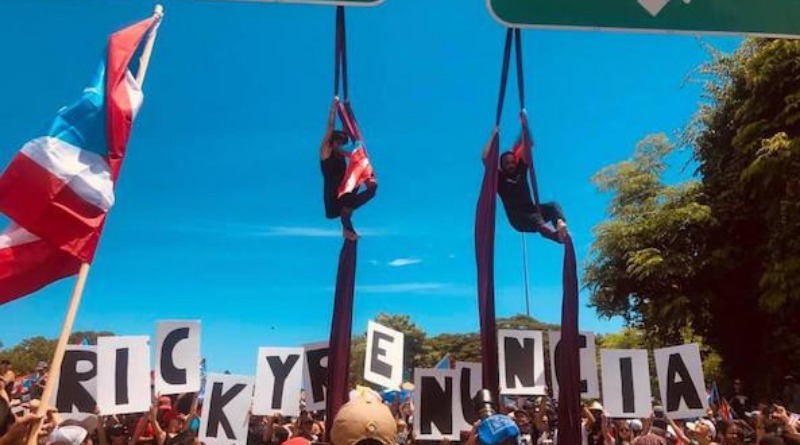 “Politicians wish to be a real Circus, where empathy, teamwork is practiced, the impossible is achieved and we take care of our family with love”, Circo News

Members of the circus community in Puerto Rico joined forces to protest the political crisis caused by corruption in the country.

During the multitudinous manifestations last Monday, July 22, protesters witnessed an aerial act in the middle of the Las Americas highway in San Juan.

Members of the circus company SubCielo demonstrated that through circus art you can remonstrate  peacefully.

“What we wanted to express with our pacific protest is that you can accomplish anything you set your mind to. As puerto ricans we are an example of that. The best way to have a strong presence at the protest was through our element, the air (our aerial act),” says Anaïs Nadal from SubCielo.

Despite the resignation of Gov. Ricardo Roselló, the people continued protesting to demand an audit of the government’s debt and the elimination of the Fiscal Control Board.   Several artists joined forces to express their opinions  through theater, circus and dance. The Plaza de Armas in Old San Juan served as the big top for 50 artists and an audience of approximately 400 people watching the show.

“The artistic protest was an initiative of the circus, theater and dance community  to support, through our art, the movement that has awakened in our country, the call for transparency from our political leaders,” said circus artist Isa Noriega.