Running Away to the Circus 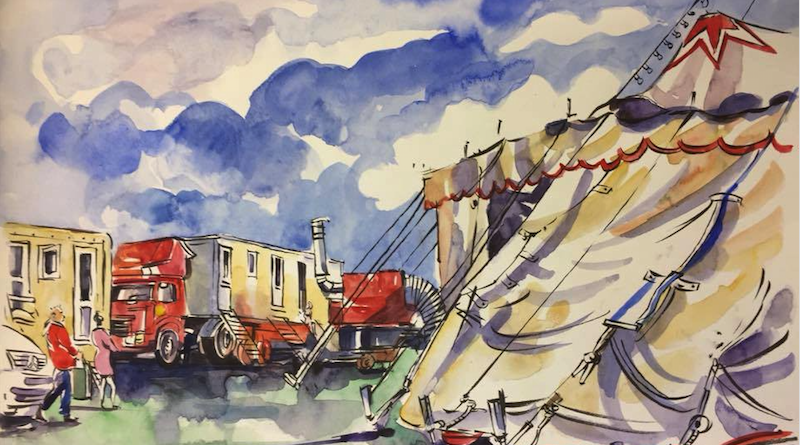 Many circus books tell us why their authors have run away to the circus; few address whether they should have. In the contemporary social order, even to ask this question is to invite ridicule – surely we should do what makes us happy, posits the egoist, surely we do what our unconscious drive tells us, posits the psychologist. Those who have thought seriously about the attraction of the circus, find some answers in the neurosciences as the emotions of the viewer can be shown to mirror the experience of the performer. But these are not answers to ‘should’ type questions, the purview of moral philosophy. Professor Alasdair MacIntyre, soon to reach his 90th Birthday, has been seen as one of the world’s greatest living philosophers since the publication of his seminal  After Virtue in 1981. Amongst many other arguments,  his latest book (entitled Ethics in the Conflicts of Modernity) endorses the decision to run away to the circus. In this article I will try to explain why.

‘Running away to the circus’ has been a constant in our 250 year history. Performers, directors, writers, visual artists, musicians and even academics have been attracted in Paul Bouissac’s words (in his book The Meaning of the Circus: The Communicative Experience of Cult, Art & Awe), like‘moths flying to a candle in the night’.  As Katie Hickman put it, recounting a year spent in Mexican circus:

The circus is full of the enchanted: many come here for love, both girls and men; others are orphans, runaways, or simply nomads, such as myself. Our presence occasions neither comment nor surprise: it is expected; because it has always been so.

At the risk of self indulgence, the history of my own family provides one example. My great-grandfather Lipot Konyot ran away to the circus in the 1860s and eloped with the director’s daughter, Henrietta Blumenfeld. Their first circus was dragged on a cart from village to village. Horses would come later, many many horses, alongside eleven children. They would form  Barnum and Bailey’s lead equestrian act for over a decade in the early twentieth century. Led by my grandfather Sandor, who later directed the Hungarian National Circus, it included his brother Arthur Konyot, inducted into the Circus Hall of Fame in 1974. When Ernest Hemingway wrote that the circus is ‘the only ageless delight that you can buy for money” in the Ringling Brothers’ Programme for 1953, he was describing Oscar Konyot’s performance with wild cats. Today, my brother David Konyot, is  one the world’s greatest clowns. His daughter Olympia is Big Kid circuses’ singing Ringmistress and her younger sister Lili’s wild west act featured in Gifford’s 2016  The Painted Wagon tour.

None of this would have happened had Lipot not run away to join the circus. A decision taken for reasons long forgotten has equivalents in thousand of circus stories. Fortunately for us, many of these have been written by those who believed that running away to the circus was the right thing to do. But few beyond our world are likely to agree. One academic told me that he thought a paper entitled  On Running Away to the Circus would be some kind of joke.  The legitimacy of the circus arts has a long history of marginalisation. In a paper from 1996, MacIntyre endorsed the opposition of the beatified Catholic philosopher Thomas Aquinas, to Frederick II’s edict of 1221 treating traveling entertainers at outlaws:

“Play and delight taken in play are therefore necessary to the exchanges and interchanges, theconvesationes, of human life.  And there are thereforeofficia through which what is needed may be supplied. These are theofficia  of players and entertainers, including  jongleurs, and theirs is a legitimate full-time occupation.”

But it is one thing to uphold the legitimacy of circus arts and quite another to endorse circus as a life-choice. So why does MacIntyre do this? To understand this requires us to know something about how any action might be evaluated. When we do this we find a gulf between modern ideas in which right action is either about obedience to law/acknowledgement of rights on the one hand or about a calculation of costs and benefits on the other. One consequence of the modern way of thinking is that some choices are matters of ethics and others not. For Aristotelians such as MacIntyre however, it is a mistake to think that there is one class of decisions which falls under the heading of ‘Morality’ and others that do not — there are simply choices and decisions. The subject-matter of ethics, understood this way, is our lives considered as a whole and this means that rather than ask whether an ethical choice supports rights or has benefits that outweigh its costs we should be thinking about what it is that enables us to flourish, and to use our understanding of this to guide our choices in particular situations.

To exemplify this, MacIntyre presents us with the character of a woman who does not believe that she could develop the skills of a trapeze artist. This comes at the start of his new book, in a section about what can go wrong with human lives. If only the woman believed that she could become a trapeze artist, she might run away to join the circus. And MacIntyre tells us she should do this. There are three lessons here — that we should beware false beliefs, that we should pursue desires where we have good reasons to and that we have plenty of such reasons to run away to the circus. For MacIntyre, the ability to consider the merits of our desires and to step further back to consider how we make such judgments, is the source of our rationality — of what it is to have good reasons to do anything.

The example of trapeze illustrates MacIntyre’s further thesis that we can only learn about the good and the excellent and further, that we can only become good judges, if we participate in complex practices, activities that test us, activities whose internal goods (such as a triple somersault) can only result from the pursuit of genuine excellence. To achieve them requires us to develop virtues — qualities such as courage, self-control and patience that every circus artiste the world over has had to develop. And if and when we become able practitioners, then we might advance the practice ourselves and teach it to others. It isonly in the context of complex practices that we can become such people and, not just co-incidentally, that words including ‘quality’, ‘excellence’ and ‘learning’ can be meaningful. The virtues do not develop because of a desire to do good, they develop because activities worth pursuing are difficult and require the best of us. And we must learn to recognise both the virtues and vices of others because sometimes our lives depend on it.

MacIntyre endorses the circus because it provides the type of context in which this can happen, in which our desires might align with our choices, in which we become neither the victims of false desires nor exploiters of such in others. Of course none of this is guaranteed; in circus as elsewhere, money, power and status can seduce and corrupt, lethargy, depression, physical injury can frustrate. But we have a far greater chance of resisting that corruption in a community of fellow practitioners. Circus Oz’s commitment to diversity,Circus Harmony’s work with children in deprived communities, Let’s Circus annual teaching and performing in remote Scottish islands, the amazing work of the Afghan Mobile Mini Circus, collectives such as Les Arts Sauts, historic endeavors such asFather Jesus Silva’s circus of orphans in Franco’s Spain and so many others are ‘doing a living’ rather than ‘making a living’, to borrow a phrase from a former priest who claims the circus ran away with him,  Nick Weber.

I have deployed evidence that corroborates MacIntyre’s endorsement of the circus in an  academic paper published earlier this year. Material from different times and places evidence continuities in the circus experience, its achievements but also its risks and marginality. It is precisely the latter, the ongoing trials and difficulties of circus life, that require the virtues of practitioners. In particular, the commitment of travelling circus artistes to their practices and the integration of their lives is repeatedly contrasted with the compartmentalization of so much contemporary experience. So, in 1999 in her book Josser: The Secret Life of a Circus Girl,  Nell Stroud argued that:

“The circus is the only medium I can think of where life and art are undivided; the essence of circus life cannot be replicated anywhere else … There is nothing else (for circus people) to fall back on, to go home to. This is it – the wind and the flapping tent and the lorries in the night and the camels slowly passing during tea outside the caravan.”

Similarly in 1942,writing about the Rosaire’s family show in The Circus Has No Home, Rupert Croft-Cook observed that:

“Even to-day there was not one of them who would not have made any sacrifice to avoid missing his act. This spirit had little of the theatrical ‘the show must go on’ sentimentality about it. There was no exaggerated respect for the audience. It was just a solid and inbred determination to ‘make the show a success’, not from selfish or predatory ends, not to please an audience or to gain a reputation, but for the show’s own sake. They had the artist’s only qualification, a passionate wish to do the one thing he can do as well as possible.”

My favourite quotation however comes from the clown Butch Reynolds, who ran away to the circus in the 1920s.  He closes his remarkable memoir titled Broken Hearted Clown with the following:

“There seems to be something stultifying about mere size, and human beings seem to be at their best in the smaller units: the Greek City State, the English country village, the little family business, the small tenting circus were all good forcing grounds for the interesting and curious flowers of human personality. ”

So the next time you hear someone use the word circus as an object of derision, the next time a parent or a friend questions what you have chosen to do with your life, you might point out that if the circus is good enough for one of the greatest moral philosophers of our time, then it might be good enough for them. Professor -United Kingdom
Ron Beadle is Professor of Organisation and Business Ethics at Northumbria University (UK).  He is co-convenor of the Circus Research Network (Britain and Ireland) and Visiting Professor at the National Centre for Circus Arts where he leads an annual workshop on circus history and culture for new students.
Ron's profile
You are about to enter a members-only zone.
To share this article on your CircusTalk member page and connect with circus professionals from all over the world, sign up now. It's free!
Sign Up
Already have an account?
Log in

Ron Beadle is Professor of Organisation and Business Ethics at Northumbria University (UK).  He is co-convenor of the Circus Research Network (Britain and Ireland) and Visiting Professor at the National Centre for Circus Arts where he leads an annual workshop on circus history and culture for new students.