Send In the Clowns-A Tale of Two Non-Profits 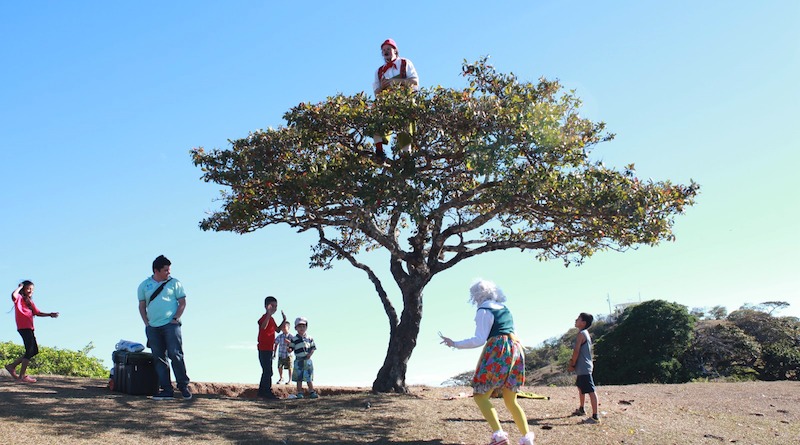 Clowns like Pennywise and The Joker currently dominate the zeitgeist with violent representations. But two humane clown posses headquartered in the United States prove that clowning for the social good carries the day in the real world, helping facilitate human connection, emotional release and personal empowerment for vulnerable populations.

They called it the “Unicycle Visa.” Clowns Without Borders actually has to cross quite a few barriers in their work to “bring laughter where it’s needed most,” so they had to justify their equipment when they visited Zimbabwe.

“The reality is that we spend a lot of time negotiating borders,” said Clowns Without Borders USA Executive Director Naomi Shafer. “This includes getting permission from censorship bureaus that want to make sure we aren’t spreading a political message.”

“But customs is usually delighted by our props,” she adds. Although sometimes the traveling teams of 3-5 performers are denied entry into the refugee camps they’re slated to visit. Clowns Without Borders was blocked in Lesvos, Greece, so instead of the planned itinerary, they stood outside the fences, blew bubbles and made music. “We were still able to share laughter,” Shafer said. “In places where other resources are scarce, laughter can be abundant.”

Clowns Without Borders works in alignment with the  United Nations Declaration of The Rights of the Child, which states that all children deserve safety, self-expression, joy, and the “right to play.” The organization was founded by professional Spanish clown Tortell Poltrona in 1993, when he was invited to perform in a Croatian refugee camp. One of the 15 worldwide chapters, Clowns Without Borders USA became an official nonprofit in 2006, and currently has a part-time two-person office based in Brooklyn, New York.

In addition to refugee camps, Clowns Without Borders brings their trained artists to other conflict zones as well as natural disaster sites. In Myanmar, they co-created a show about  landmine safety.

“Play is essential to childhood development, and is especially necessary for children who are healing from trauma or living in protracted displacement,” Shafer said. An audience member in Myanmar said, “The show is very important for the camp because even though the violence happened in 2011, people are constantly reminded of the trauma they faced from bombings and being pushed out of their homes. The laughter is a way to move on.”

Clowns Without Borders tours by invitation only, since sometimes clown artists are not appropriate in certain settings or crises. They collaborate with locals who represent the populations served. Sometimes partnerships start with a Facebook message, and others result from relationships with larger aid organizations like USAID, and, yes, Doctors Without Borders.

Play is essential to childhood development, and is especially necessary for children who are healing from trauma or living in protracted displacement.

The name Clowns Without Borders started as a takeoff of the Doctors’ version, but it stuck, and the Clowns Without Borders code of ethics is inspired by the medical antecedent. Both respond to a wide array of displacement emergencies without regard to race, religion or political affiliation. Both work with children of gang members, of police officers, of guerilla fighters and children who have been displaced by guerilla warfare. Most recently, they partnered with Doctors Without Border in Haiti in 2017.

The Clowns Without Borders intervention programs usually run for two or three weeks. Once the clowns are onsite with local artists, they create a show based on the circumstances, including electricity accessibility and performance surfaces, says Clowns Without Borders US Communication Director Nicole Loeffler-Gladstone. The artists assess and tweak the show throughout the tour based on audience responses. Time in these marginalized communities can include free performances, and many stints also offer informal parades, music and playtime before and/or after a performance.

But performances are never mandatory because Clowns Without Borders wants to ensure that audiences have agency since people in crisis have few opportunities to control their own lives. The clowns respect those boundaries and allow camp residents to decide how to interact. Artist Robin Lara, who performed in Zimbabwe, said, “One of the camp leaders heard people talking about how they’re going to follow the show around since they’re having so much fun. And one very old man told her, ‘I never thought this could happen in this camp. I’ve only ever seen this on TV!’ ”

In 2019, Clowns Without Borders USA has been to Bosnia, Brazil, Guatemala, Romania, Serbia, Zimbabwe, and Tijuana, Mexico, in January and March, as well as a traveling tour with asylum seekers throughout that country. They’ve just started two three-year programs in Columbia and Palestine, where they’ll provide clown training to local artists. The next tour will be in Ecuador to reach Venezuelan asylum seekers there.

Clowns Without Borders performers are professional clowns and circus performers who can entertain audiences large and small without language or cultural references. They are asked to quickly collaborate with others to perform two or three times a day, and need to be experienced travelers who are fit, adaptable, stable and have strong teamwork skills. Artists should be ready for resource scarcity, such as a lack of running water, internet or electricity, and limited options for food.

The group works with only one new artist per tour, and spends time preparing him or her for self-care as well as the cultural context of the anticipated audience, and behind-the-scenes conflict resolution. Unicycles notwithstanding, teams travel light to reach places sometimes inaccessible by car. “In rural Myanmar, our van was unable to ford the river,” Shafer said. “So we waded across and then rode on the back of a motorcycle to get to the school.”

Yet the most important trait in choosing performers is cultural humility. Clowns Without Borders wants artists who are collaborative, humble and respectful of audiences, creating a product that is awe-inspiring yet celebrates viewers at the same time. Since clowning is about turning power dynamics upside down, audiences who are experiencing displacement or stress can relate.

The performers create under pressure too. On a recent trip to Columbia, Clowns Without Borders performing artist Hannah Gaff had just four hours to pull a show together with four clowns from partner organization Cali Clown. They hadn’t met or performed together before that week.

“Prior to arriving, I prepare by learning what I can about the communities I’ll be visiting, and research the history of any themes that need to be relayed,” said Gaff. “Then I show up in clown and play with that in my clown brain. Since I don’t know my clown partners, I find it’s best to come without a plan and listen, but I bring my backpack full of playful clown ideas.”

Clowns Without Borders USA makes about 8-12 international tours per year and covers all the artists’ costs. The $130,000 annual budget is raised almost exclusively through individual donors like $10-per-month members. They also welcome in-kind support like translation and social media services, car rides and meals. Project partner recommendations are appreciated as well. Clowns Without Borders also enhances perceptions about clowning as a change agent for all ages. Rami Khader, from partner Diyar Theatre in Palestine, said, “We had never thought about clowning as a performance or as an art. We always thought of it as something small, for a few kids, not to connect to all people. The adults would come to take care of the kids and were so engaged. We learned that clowning can be an art for everyone.”

Clowning seems especially appreciated in places teeming with tedium, tension, and trauma. Shafer said that in a border town between Turkey and Syria, the CWB team had tea with the village elders to pay respect and explain the work to get permission to perform. That night, they performed at sunset with airstrikes in the distance, without fear as well as without borders.

“When I first heard that this kind of work existed, it was my ‘Aha!’ moment,” said founder and artistic director Vuocolo. “I felt like this what I was meant to do.”

Vuocolo was a professional actor in Chicago for over 20 years, performing and devising work with ensembles such as The Neo-Futurists, 500 Clown, Barrel of Monkeys, and CircEsteem, as well as teaching journalism and communications at North Park University.

She had also worked with the Big Apple Circus Clown Care Unit for a decade, so when moved back home to central Ohio in 2013, she wanted to bring therapeutic clowning there. Good Medicine Productions was founded in 2016, and the following year they started working at a nursing home and at Nationwide Children’s Hospital.

Good Medicine Production started with an eight-visit pilot at a nursing home. Vuocolo remembers a female resident who spoke in gibberish but was excited for the performance. She engaged with the ensemble, singing and giving Eskimo kisses with her nose. At the conclusion, performer Gigi said, “Goodbye! I love you,” and the woman responded, “I love you very, very much.”

The staff gasped. Some were in tears. This was the first time they had heard the woman speak English or words at all. Now the nursing home program has grown to five facilities, each visited twice a month.

At Nationwide, the group of “medical professional” clowns offered an interactive show where Ralph the Therapy Dog was missing, and the audience of sick children was needed to help find her. The clowns really can’t do anything, Vuocolo said, so they look to patients and residents for help, which is empowering.

The mother of one of the kids also cried at the end of the show. Her child had had a hard week, and mom was shocked at how engaged and energized her child was during the performance. Now GMP performs monthly for patients as well as for kids in the siblings’ room. They hope to add weekly visits for patients who can’t leave their rooms.

Beyond the big top and into intimate spaces, social clowning continues to bring agency to those living in sickness, distress and trauma. The outcomes are proving positive, uplifting and therapeutic, proving that, yes, laughter is indeed the best medicine.

Instructors/ Circus/ Pole/ Desk/ Sales Fly by and check us out !!

Looking for a freelance Male dancer for the 2021-2022 season