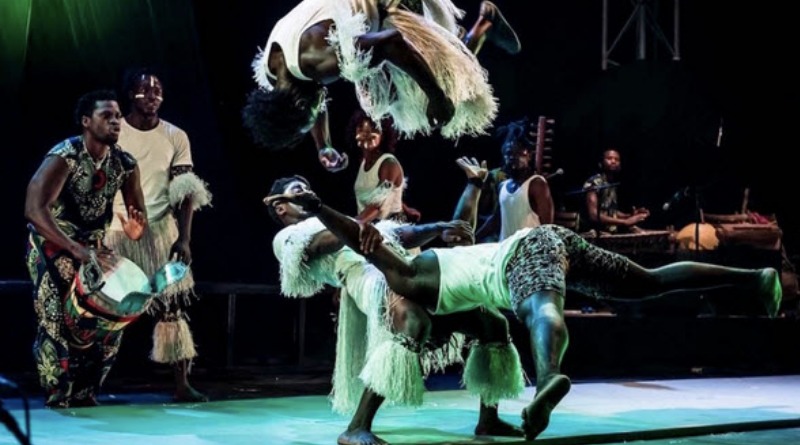 The third iteration of the Circus Festival of Abidjan is taking place March 2nd to the 8th 2020 in the Ivory Coast of Western Africa. We spoke to Festival organizers about this event which has shaped up to be the largest circus event in the West African sub-region, offering both shows and 60 hours of workshops in schools. Organized and run exclusively by volunteers, the Festival receives support from The European Union, and the French Institute as well as local sponsors contribute to the sustainability of the Festival.

Two free street shows are offered in partnership with the European Union with the goal to reach as wide an audience as possible and to bring the circus as close as possible to the population. RICA is above all a popular festival accessible to all, where artists rub shoulders with the public and vice versa.

The Festival is the brainchild of Chantal Djédjé, an essential figure in the cultural life of Abidjan. After leading a long career as a cultural entrepreneur in France, Chantal Djédjé decided to return to the country to open the first private cultural center in Abidjan: La Fabrique Culturelle, which presents and produces numerous shows in various fields.

In 2018, she founded RICA (Rencontres Interculturelles du Cirque d’Abidjan.) The RICAs (Intercultural Meetings of the Circus of Abidjan) represent a unique moment of exchange and sharing aimed at bridging cultures. The third edition of RICA will take place at the Institut Français, but also outside the walls, in the streets of Cocody and Abidjan.

From the first editions, the RICAs met with public support (nearly 10,000 spectators in 2018, 12,000 in 2019, and 15,000 visitors are expected in 2020). During Festival days, circus companies from all continents come to perform. Canada, Japan, Morocco, and France will be represented, but also Burkina Faso, Guinea, Benin.

Women in the Forefront

If art nourishes her professional life, Chantal Djédjé, as an African woman, entrepreneur and cultural promoter, never stops placing women at the heart of her decisions. During her career, she has worked on violence against women. Chantal Djédjé also belongs to the “Women in art” network, a network that connects women artists across Africa.

This year, the Festival is focusing on women. On March 8 at the French Institute, the festival will have the honor of hosting the company Inno Kollectiv, a troupe that brings together 7 women of 6 nationalities, speaking 6 different languages. Each one brings with it the universe that characterizes it. In their acrobatic show, these 7 women count on their singularities gathered to open a window on a world. Ino Kolectiv members will also participate in a workshop, in partnership with the Ivorian association “Stop Chat”, which combats violence against women (Sunday March 8 at 11 am at the French Institute).

For the first time in Abidjan, an equestrian show will be held in the courtyard of the French Institute with, in the saddle and live, the famous Burkinabé rider Madi Derme will demonstrate a great moment of equestrian acrobatics during which man and horse seem to be one.

KAWHA, The annual meeting of circus and street arts professionals, took advantage of the timing of the RICAs to hold its 2020 edition. This meeting will take place from March 6 to 9, in partnership with the MASA (Abidjan Art and Performing Arts Market) and the Circostrada association. The goal is to meet professionals from the performing arts. It is also an opportunity for recruiters to come and discover new talents. There will also be a talent scout from Cirque du Soleil in attendance(also present during the second edition of the FADNs).

Thus the importance of the Circus Festival of Abidjan’s influence on circus arts on the continent of Africa is clear and well underway thanks to the collaborations and efforts of the key players.

The Pivot: Episode 5 – Get Prepared! Demo Reels and Casting Advice With Charlie Burrows

February 19, 2021 Projet Lumiere ProjectComments Off on The Pivot: Episode 5 – Get Prepared! Demo Reels and Casting Advice With Charlie Burrows

Promoting Positive Mental Health and Wellbeing in the Circus Arts

February 16, 2021 The Arts Wellbeing CollectiveComments Off on Promoting Positive Mental Health and Wellbeing in the Circus Arts
Asia News and Events

Keep Blossoming: A 2020 Taiwanese Circus Retrospect in the Pandemic Era

February 15, 2021 Tai-Jung YuComments Off on Keep Blossoming: A 2020 Taiwanese Circus Retrospect in the Pandemic Era