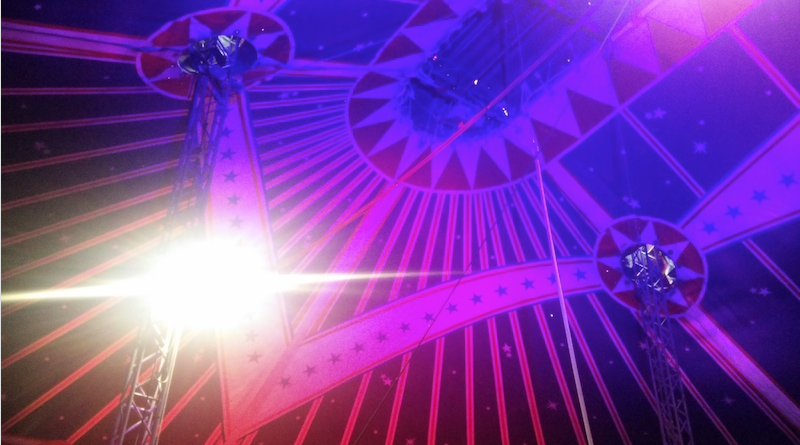 Bright and early on Wednesday morning, April 18th, I made my way from London to Newcastle-Under-Lyme, a small town in Staffordshire county, England, for a conference organized by NoFit State Circus.

The location of this conference was not accidental. Newcastle-Under-Lyme is the birthplace of Philip Astley, who is considered by scholars to be the father of circus as we know it today. Born in 1742, Astley was a soldier and a trick rider who revolutionized his field – and planted the seeds to ours – when he first performed his riding tricks in the round, using the centrifugal force of the ring to his advantage, thus allowing generations of riders to find better balance on their horse’s back. His first use of the ring dates back to 1768, making 2018 the 250th anniversary of his important contribution to circus artists centuries later. This year, the UK is celebrating this anniversary with events galore, mostly under the umbrella of Circus250.

The event, titled “The State of the Art: a Radical Circus Conference,” brought together circus practitioners, academics, directors, makers and fans – all to talk about the future of circus. Held in a massive tent at NoFit State’s circus village, topics ranged from social circus to the lexicography of circus, with speakers from both the theoretic and practical ends of the circus spectrum.

The day started with small group discussions on different provocations stemming from the larger question “How can circus respond to challenges in today’s society?” led by Ali Williams, one of NoFit State’s co-founders. Some groups discussed marketing and funding challenges, some space issues, some creative approaches. My group bounced around ideas on how to make circus appealing to today’s audiences, how to break the mold of more traditional preconceptions circus audience members might have and bring them experiences more up-to-date with what truly interests them. One of the group’s most interesting viewpoints came from Bex Anson, Performance Director for the company Bassline Circus. Miss Anson shared her experience of running a performance company that combines live circus acts with video art projections, usually within the framework of warehouse-style parties. She described conversations with their audiences as well as research into current youtube trends, leading to shows that present circus alongside street dance practices such as Krump and Flexing.  Her take was that, as circus attempts not only to survive but more so thrive, it can (and should) take into account the things that interest its audience members, and produce the kind of work that speaks to them on their level.

After a quick tea break, we had short presentations from three different (yet somewhat complementary) circus practitioners: Ash Perrin, founder of The Flying Seagull Project, bringing the angle of social circus; Zaq Andel, co-founder of CircusMASH, a circus school and training facility; and the aforementioned Bex Anson from Bassline Circus, a performance company.

Mr. Perrin discussed the work of his company at refugee camps throughout Europe, touching on the important impact that social circus can have on people (especially youth) under risk. His personal anecdotes on refugee children finding joy and laughter in the visiting circus artists, accompanied by a video showing their encounters, were truly inspiring. Mr. Andel discussed the involvement of their circus school in the local community and the benefits of bringing of circus practices to the people. Miss Anson presented her company’s work and discussed their upcoming plans for shows and residencies.

After lunch we gathered in the tent again to hear from Gerry Cottle, a giant of British traditional circus who owned and ran his own circus company from 1974 to 2003. His main point – that show business should always balance both “show” and “business” – was a practical viewpoint on circus as needing to be more than just an art form, but to respect the business of it as a source of income and livelihood for many people.

Dr. Dea Birkett, who is heading the Circus250 project, spoke next about this overarching organization and its upcoming plans, inviting everyone present to submit their events to the website and come under their umbrella.

Lastly, Luke Hallgarten, juggler at NoFit State’s current show Lexicon,followed with an almost juxtaposing view to Mr. Cottle’s: his remarks on the type of work he is interested in creating, and how he views the role of circus artists within today’s industry, emphasized the contemporary circus performer as first and foremost an artist and maker, shedding light on the inner working of a highly creative circus mind.

It was interesting to have these three speakers in consecutive order: Mr. Cottle comes from the traditional circus world and Mr. Hallgarten from the contemporary circus world; Having Dr. Birkett between them, extending her invitation to all, felt like a sort of bridge between both worlds and served almost as a gentle reminder that we are all sharing the same goal indeed: to expand, promote, and innovate the role of circus in our society.

Next was circademic Katharine Kavanagh, founder of The Circus Diaries website reviewing all things circus.  Miss Kavanagh approaches the question of “How We Talk About Circus” with some interesting perspectives on the language we use and the definitions we give to circus work. Discussing the problematic terms “traditional” and “contemporary” circus, Miss Kavanagh offered alternative measuring tools for circus shows, such as its intended impact (a spectrum ranging from engagement with others to personal identity) and its performative approach (ranging from established ritual to innovation). It was absolutely fascinating to re-consider circus under such a different lens, and I found those tools to have useful potential for circus makers of any kind.

The last event was situated around a long table. Participants were invited to come and go, to listen or talk as they felt compelled to. The question: “Where are we going and how do we get there?” The opinions were diverse, but one thing could have been distilled that everyone agreed on: that the key to a better circus future is companies and organizations supporting each other. Be it with space or money, with mentorship or skills, the general sentiment was that we are stronger together, and that our survival – and indeed our flourishing – depends on creating a better infrastructure for circus individuals and smaller companies to be aided by the larger, more well-established circuses.

As the sun was setting on this gorgeous day (21C, a true rarity for British spring!) everyone sat outside the tent and shared stories over a cold beer to put a closure to the conference. The day was packed full of things to think about, but one thing I believe everyone took away from this experience is the realization that we have an amazing amount of smart, unique voices in our industry, and that our community shares a responsibility – and funny enough, also a genuine desire – to lift each other up.