Strength in Numbers: The 34% 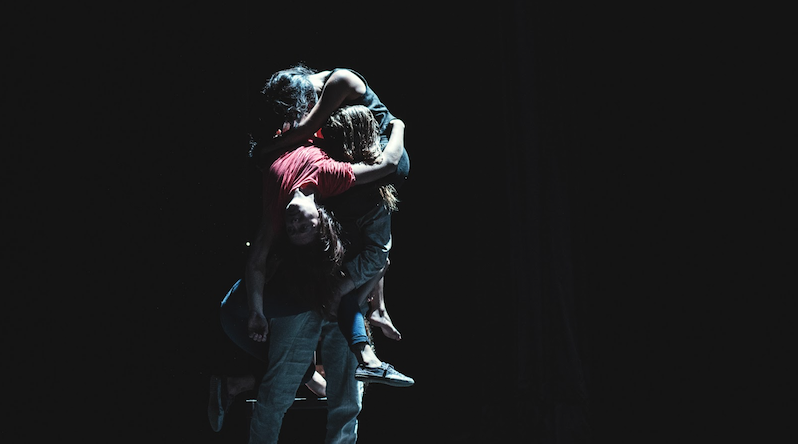 How do you decide if something is fair? Where do you start if your gut feeling is telling you that not everything is as it should be? And what if you’re right? Or wrong?

After yet another year of festivals where I could count the female ensemble members on the fingers of one hand, I felt like something was amiss. As someone passionate about circus and feminism, and fueled by an ungodly amount of coffee, I wanted to find out if circus is ‘equal’. At this point, equal would mean a balanced amount of artists identifying as men and women on stage. How they are portrayed or what the shows were about was not even to factor in at this point.

This is not going to be a fun read. This is not a feel-good text about the undeniable progress we´ve made in circus regarding equality. This is about some potentially alarming numbers I gathered while I was trying to find answers about circus representing women.

Over the past few years I´ve had discussions about women in circus, more specifically the amount of women on stage compared to men, with colleagues within and outside of circus, with programmers and bookers, performers and audience. The discussions have always relied heavily on personal accounts and gut feelings, since I couldn´t find any significant amount of data to make a global claim about the contemporary circus.

As I expected, I was not the only one who was looking for answers, but I also discovered a surprising amount of people who didn´t realise that this imbalance might exist, nor that it could be a problem if it did. These discussions would often lead to someone name dropping two all-female companies and act as if that was enough proof that there were equal portions men and women on stage in circus and no need to dissect and find flaws in something we all love. For some of us that is enough, ignorance is bliss, and if you have an inkling that circus might be under-representing women then that´s probably a thread you´d rather not pull on. However, if anything is going to change we have to own up to the fact that circus might not be the perfect, all inclusive magic wonderland we want it to be. How does one prove this though?

Last year during the Rotterdam Circusstad festival, I was discussing this with juggler Roxana Küwen, who gave me the fantastic idea to research if there was a discernible discrepancy between the amount of women in circus education and women in the professional circus field, to show that any lack of women on stage is not due to a lack of female circus artists (assuming that there would be roughly an equal number of men and women in circus schools). The notion that the number of female graduates in comparison to women on stage could give a solid answer to whether circus has a gender bias was simple and brilliant.

I started researching the number of men and women graduating from circus schools over a ten year span but found the data available wanting. As most schools didn´t have these numbers available, and some were reluctant to release data over such a long time frame, this became a bit of a disappointment. Thanks to the generous assistance of the Gynoïdes Project and a particularly enlightening read by Alisan Funk, I still managed to put together a patchwork spreadsheet which suggested that certain schools do favour male candidates. This however was not sufficient to give a reference as to the ratio between women and men we could expect to see in the field. This idea however, ‘a reference to the field’, became the logical next step in my research. If I would have had the numbers from all circus schools I enquired with, what would I then have compared those numbers to? Circus is performed in a multitude of ways every day and some forms are more well documented and advertised than others, so for accessibility of information and based on the fact that festivals look quite similar all over the globe, I chose this as my topic. This would quickly turn into quite the revelatory experience.

I looked at 33 festivals. All but one of them taking place in Europe, the last one being in Montreal, Canada. To avoid too much of a personal bias, I took lists of circus festivals from websites reporting on contemporary circus, and asked my peers at the circus school I’m currently studying at to recommend some as well. I exclusively looked at festivals that described themselves as presenting contemporary circus, since it is my own working field and because of the relative gender awareness in the scene I assumed bookers and organisers would be more open to a project such as mine. It turned out most festival administration was very interested in the topic and happily shared any information they could, even if they had continuously booked a very clear male performer majority over the years. Already after having gone through the list of performers of the third festival, the pattern started emerging. It was a golden rule of one third. However, statistics are easy to manipulate, and by selectively choosing certain areas I could have found numbers to back up almost any claim about representation in circus. That’s not what I’m trying to achieve. In fact, I’m trying to not interpret it at all. At first I wanted to, if only to be able to make bold statements about improving the equality of the circus scene, but that’s not a job for me alone. I only aim to supply data at this point. These are simply the numbers that came up during my research, and I’m just here to arm anyone who needs it with data. Opinions can be swayed and experiences can differ, but numbers stay the same.

Which are the underlying factors for the selection processes in circus schools? How do elements like the media’s portrayal of the arts influence the gender balance? How do other art forms stack up, compared to circus?

My one hope is that these numbers will be used again and again. To be put in perspective, used in discussions, and in research and wherever they’re needed–as a stepping stone to further equality in the circus field. Because even if the numbers are telling in themselves, they cannot explain why women only represent about 34% of circus performers in the 33 circus festivals I researched. 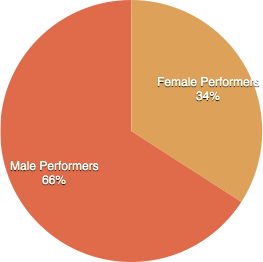 The overview pie chart of the 33 festivals researched in 2017 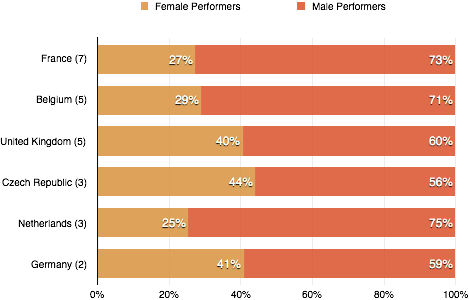 (The number next to the countries name denominates how many festivals were sampled in that specific country.)

Now, I wish I had the information to answer why these numbers are what they are. Or what this 34% means, but I don´t. There are still many unknown factors to delve into on this particular topic, and never enough time. Throughout the writing process I had to continuously eliminate topics and queries, to ultimately make my paper a single statistical pilot study.

If there had been more statistical surveys, more research and more writing about circus from a sociological perspective, there would have been a better context to compare these numbers to. Which are the underlying factors for the selection processes in circus schools? How do elements like the media’s portrayal of the arts influence the gender balance? How do other art forms stack up, compared to circus? Is the gender discrepancy that we find in these numbers globally representative for circus? Maybe. There are many festivals out there that I could not look at, and many more kinds of events where circus is performed that simply aren´t as well documented. How many female performers and companies apply to these festivals? Do the female performers represent a larger portion of applicants than the male performers? I don´t know. Is the imbalance we see in these numbers because of circus schools intakes, and how have they been changing over recent years?

Is the under-representation we see due to any other sociological circumstances? Since circus is a product of society, and circus, as any art form, is multi-faceted, diverse in expression and influenced by other outside forces, the need for further academical study is paramount. These numbers only represent one part of the equation, and only with similar endeavours can we hope to come to any conclusions. Fortunately, contemporary circus seems to develop its academical side at a steady pace and with more research and awareness we can hope to uncover the imbalances and quickly see to it that circus continues to improve itself.

For now, it is up to all of us to ensure that this happens. To always be inquisitive. To debate, argue and protest. To never settle. To keep fighting until circus becomes everything it can be. Scholar, Circus Artist -Sweden
Jakob Jacobsson was introduced to circus when he was working in a jazz bar and asked to play accordion for a cabaret troupe. Since then, he´s been working on trying to find his own style in the aerial rope, and is currently studying at Codarts Circus Arts in Rotterdam where he´ll be finishing his degree in June 2018. Besides the rope and his two newly founded circus companies, he has a penchant for academia, black coffee, and Tom Waits.
Jakob's profile
You are about to enter a members-only zone.
To share this article on your CircusTalk member page and connect with circus professionals from all over the world, sign up now. It's free!
Sign Up
Already have an account?
Log in

Jakob Jacobsson was introduced to circus when he was working in a jazz bar and asked to play accordion for a cabaret troupe. Since then, he´s been working on trying to find his own style in the aerial rope, and is currently studying at Codarts Circus Arts in Rotterdam where he´ll be finishing his degree in June 2018. Besides the rope and his two newly founded circus companies, he has a penchant for academia, black coffee, and Tom Waits.