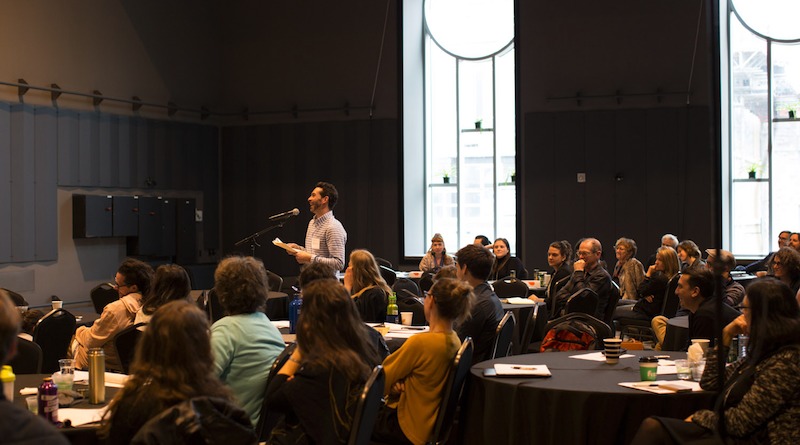 The En Piste AGM(Annual General Meeting) is a chance for the circus community to come together once a year to connect, discuss, network and brainstorm answers to some of the industries toughest problems. What are realities and challenges that artists face? What are some concrete measures to put in place to better support artists within their career and artistic development? What are some methods to improve the profile of artists in society? 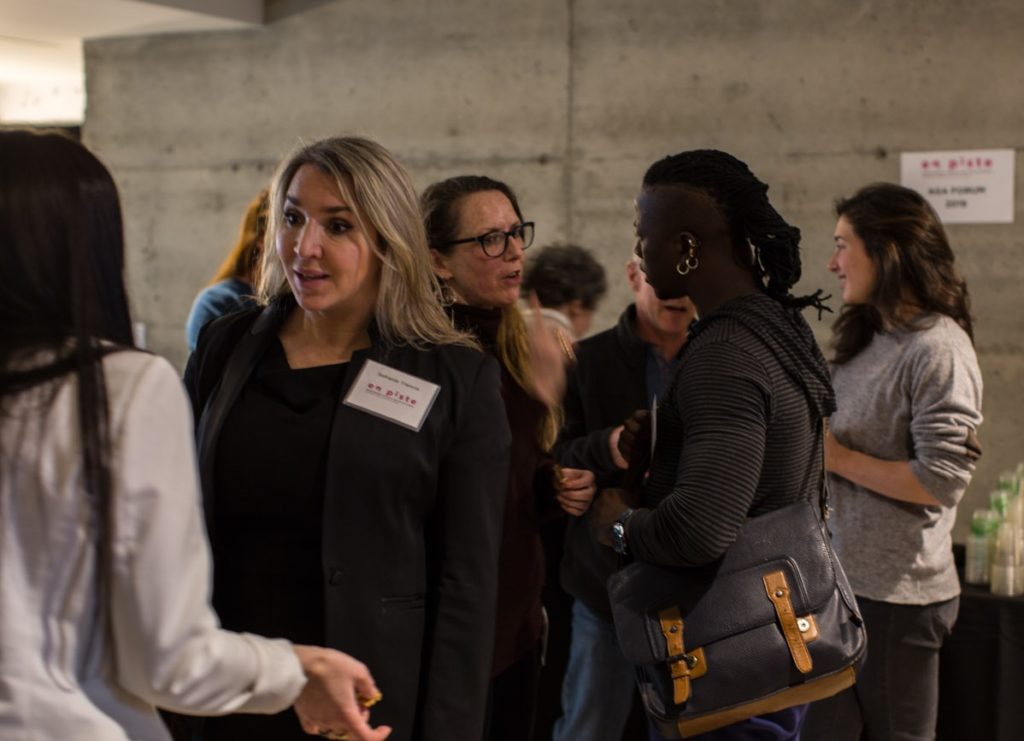 This year’s AGM Forum, hosted by Les 7 Doigts (The 7 Fingers) in the company’s (very swish) new Creation Centre in Montreal, kicked off with the AGM formalities; presenting the annual report from 2018 and perspectives on what 2019 has brought so far. Following this, there were several presentations from En Piste-affiliated organizations and members including  L’APARTE,Femmes du Feu,St John’s International Circus Festival andCirque Hors Piste.

The real meat in the sandwich of the AGM were the panel discussions animated by Esther Carron, where circus artists at the top of their game were invited to share their insights and experiences.

The first panel,When all the world belongs to us, explored the realities and consequences of being on tour for extended periods. The panellists included Yamoussa Bangoura, Geneviève Bessette, Jinny Jessica Jacinto and Remi Jacques, all sharing their own stories (and top coping strategies!) of life on the road. Contortionist—and mother of three young children—Jinny Jessica Jacinto has been touring on and off with Cirque du Soleil and other companies since the tender age of 13, and she had especially great insights into how she makes the pieces of her life fit together.

Panel number two was  Daring to be Audacious, with panellists Élise Leblanc, Andréane Leclerc, Gypsy Snider and Holly Treddenick. Each of the four panellists, in their own way, acknowledged the debt that audacity owes to vulnerability and authenticity, with Holly Treddenick (Femmes du Feu) noting that risk is inseparable from trust, and Andreane Leclerc (Nadère Arts Vivants) telling the audience that audacity is about giving the space for mistakes. 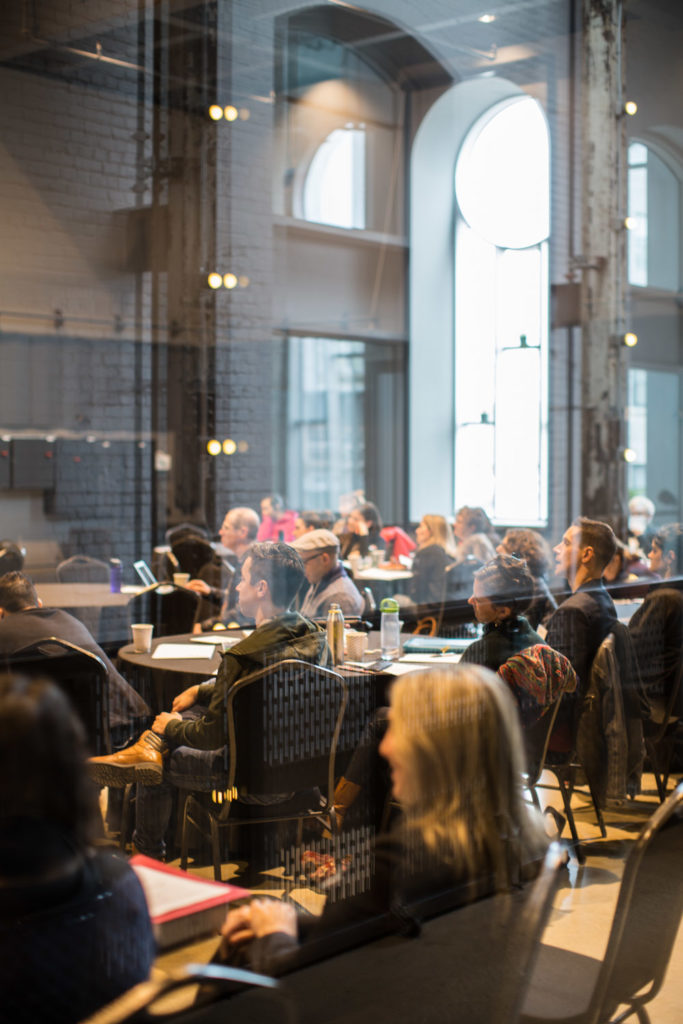 Gypsy Snider (Les 7 Doigts), took this concept even further with a story about a show she premiered last year. I was so struck by it that I asked Snider to retell the story in English for CircusTalk readers — it brings up some insights and questions about the nature of creation and of failure that, as a circus community, really beg some attention. The story is reproduced below in Snider’s own words.

I was doing a premiere of a new piece. It was premiering here in Montréal and the piece was involving circus people at different stages in their career; older, not the typical young circus performer that we tend to have experience working with. So we were really going into different territories: I was exploring new methods of directing and writing and collaborating with people on stage.

Immediately after the premiere there was this silence because it was this very sort of suspended ending to the show – which we wanted. And somehow in the silence after the suspension a male voice echoed through the whole theatre.

I was standing backstage because it was the premiere and we still had certain things that weren’t finished. And I stood there and heard that reaction and there was silence before it and silence after it. I think my first reaction was to laugh… but not necessarily like laughing uncomfortably. I felt like I was in such a foreign space that it was almost like “Wow. I didn’t expect THAT!” The show was really vulnerable. I was really vulnerable, I allowed myself to be vulnerable. I forced myself to do things differently with this show and with this cast. The one thing I didn’t prepare myself for was negativity.

I think we’re in a culture right now where were saying “take risks” and “you have to have failure and experience it and fall and get back up”. We say it in TED Talks and we say it in Facebook memes and whatever. But to actually do it and to have felt so good about the process and so strong in my conviction that I needed to go to someplace new and different at my age and in my career and in my creative voice that actually the “BOOOOOOOO” in a way was welcome. I was ready for it. I was ready. It was painful, but in a way I’d achieved something that, for example, when I’m creating a show that everyone’s applauding and they’re like “The tricks are so great and the performers are so gorgeous!” I don’t know where to position myself anymore.

I didn’t see the show in question, but I do remember hearing about it, and, inevitably, about the boo. I asked a friend who went to share her memories of that night, and she said, “It hurt my heart to hear that boo. It was jolting and complicated, because the show was meant to honor a woman, a musician who passed away, and lots of her fans and friends were in the audience, so it was all sorts of awkward.”

For me, and I think others at the En Piste AGM, It was heartening to hear Snider share that story instead of burying the experience, and it was a privilege to understand more clearly her process in creating the work and also her response to the audience negativity. 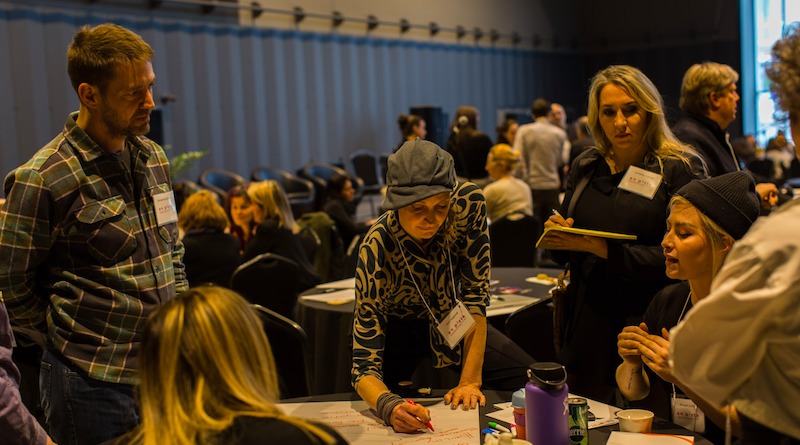 The third and final panel of the day wasCareer Trajectories, with panellists Anahareo Doelle, Fernando Dudka, David Girard, Yves Landry and Luc Tremblay. They spoke at length about their pathways to circus from gymnastics, sports, trampoline, dance, music, kinesiology and how their background affected their approach to circus as a technique and as an artform.

The stories and perspectives shared within the framework of the En Piste AGM panels show the true character of Canada’s circus community. There were far more stories of generosity than self-promotion; the kind of humbleness, gratitude and vulnerability that are rare at most braggadocio-laden arts industry events.