The Audience Can Wait: Putting the Process Before the Production 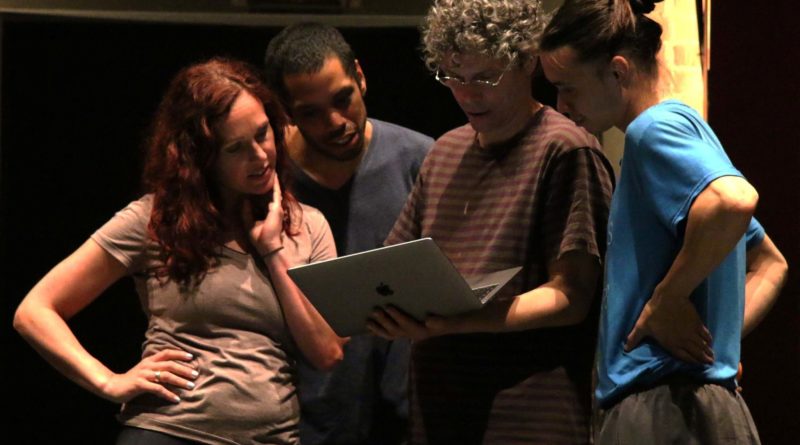 Four days into development and rehearsal for their upcoming show, the artists participating in Circus Sessions 2017 are taking a well-deserved lunch break, but it certainly doesn’t seem like many are relaxing.  With such a tight timeline — only 5 days to delve into the collaborative process that is creating a show from inception to showing — many are studiously practicing their juggling. None want to disappoint their mentor, world-famous juggler Sean Gandini. A few are sipping coffees and checking their phones. Some are casually chatting with one another, making connections with other artists from other places and disciplines. Holly Treddenick, producer and creator of Circus Sessions and artistic director of Femmes du Feu, sits behind her laptop working on last minute details for the showing taking place the following evening. She’s also organizing rigging for HabourKIDS Circus, another event she has been curating and which is taking place over the Victoria Day long weekend in Toronto.

When Sean Gandini enters the room the group starts to come together. Lunch is over and rehearsals need to get started.  The showing is only 24 hours away and there is much to work on yet. The pressure to have a completed show looms heavy in the room, but the emphasis and purpose of Circus Sessions is really focused on the artists’ learning and development, and not on having a polished piece of work to bring to an audience. The audience that will be coming to see the show is a part of the sharing process, their input and reactions will be added to the week’s collection of creative mining that has occurred over the course of the week.

Nettie Lane is the first to her feet. She approaches her German Wheel and begins to speak. Between each of her comments she stops and performs a trick on her wheel. Gandini asks her to stop several times. “I don’t know if your tricks need the commentary,” he says. He puts on a slow-paced, bass-heavy electronic song and asks her to do her tricks again without the commentary. “I’m in two minds. I like both. My friends will let me know which is better,” he concludes. He claims that his experience as a director may cause him to be more autocratic than required, but he defers to the group often enough to question this claim. In the end, it’s decided that the longer commentary will be shortened to a brief sentence. Lane proceeds to provide her lines and tricks one more time and everyone seems happy with the outcome. This final conception is what makes it into the showing the following evening.

In the next piece, everyone has been working on a complicated juggling sequence in groups of three. One member stands apart from the trios and is explaining the pattern as the others pass a ball between them incorporating different kicks and whacks. Apparentl,y it’s the juggler’s whack and not the full whack, or so it’s explained. Gandini abruptly pulls the first speaker and asks another to take his place. This new version of the explanation seems to please him. The first speaker joins one of the groups of three passing, whacking and kicking through the pattern. There is still an issue with this bit though.

“You can tell me to ‘F–k off, Sean’ if you want…” he jokes while suggesting a change in the pattern that they’ve been working on. Immediately, someone chimes in with a quick “F–k off, Sean,” and the group laughs. Gandini feigns hurt feelings, “That’s not nice. I’m here trying to help you!” Despite the jokes, something is still bothering him. It’s the timing of the passing. The group is finding it difficult to synchronize their movements and it doesn’t seem to be getting any better with multiple attempts. “Do you use the expression ‘It’s gone tits up’ here in North America?” he asks. The group does a bit of brainstorming and someone downloads a metronome to their phone. Finally everyone comes together and has a successful run-through of the bit before moving on.

These types of on-the-fly changes are commonplace throughout the afternoon. This is the process of Circus Sessions. For some, like Kevin Chen, this is one of the highlights of the week. “Working with Sean was great. He is very energetic and we worked at a very fast pace to create everything that went into the show. He was also very good at generating spontaneity and testing ideas that really come from strange directions,” he says. The showing is constantly forming, reforming, shifting, and changing. And there is only one more day to create and rehearse before the group will perform in front of a paying audience.

In front of a packed house, the 13 performers unleash their creation. It is bare bones and raw. There are no costumes, no glitz or glamour. Aerialists are mainly grounded. Clowns do not clown around. The story arc that audiences have come to expect from large scale productions like Cirque du Soleil does not evolve — at least in a traditional sense. The whole notion of circus and the cliches that surround the art form are challenged throughout the evening.

When watching the 14 separate “bits” that were created for this performance, the audience is confronted with a show that seems to be about the show. Each “bit” is introduced by number. The only sense of fluidity to the piece is that the bits come in order. Some bits, like “Mighty” Mike Johns’s commentary on street busking, seem to be light-hearted and cute. “Don’t try this at home kids…. Try it at school!” he quips. Others border on disturbing. In a piece that Gandini describes as “theatre of cruelty” the group gathers under Britt Howlett’s trapeze during “Bit 6” shouting obscene and intrusive comments in her direction. Using phrases like: “She’s not even that high off the ground” “Smile more!” and “I bet your boyfriend likes that” they demonstrate how the general public views the performer as “other” and not as a human being with feelings, someone who can hear what is being said to, or about them from the audience.

At one point in the showing, Manuale Rodriguez Seanz and Christel Bartelse, the shows clowns stand on a stage empty of performers other than themselves. As the music of Rachmanioff plays, they describe a circus show that is not happening with such enthusiasm, vigor, and lack of detail that the audience can only watch and wonder what might be happening in their imaginations! That same speech is repeated several times until each member of the troupe makes an appearance, slowly filling in the spaces between the clowns’ words with actions and meaning before coming apart again and falling into chaos.

In the final act, the showing’s dissonance comes to a head. The last person left on the empty stage is Bartelse. As the penetrating bass increases to the point of overwhelming discomfort, she screams her frustrations and challenges the audience: “Why are we doing these pieces about pieces we never made? I don’t even know what this contemporary bullsh*t is anyways. People are dying and you’re paying $20 for this bullsh*t.” And then the music and lights die and she’s gone, leaving the audience to digest what they’ve just seen, heard, and literally felt in their guts.

Audience members that choose to stay for the talk back have the opportunity to ask questions and find out more about the show from Gandini and the rest of the participants and organizers. There is much talk about circus and how it is presented. In this particular show, the main question the group confronts is about structure. “It was a question about the structure of circus. What makes it great, but what limits it. The crescendo. Is circus interesting enough to sustain that structure?” Gandini explains. “I consciously wanted the piece to have a sense of self-mockery, for cliches to be broken down.”

Artists also have an opportunity to reflect on their own experiences during Circus Sessions, when the lights dimmed after that first show. “I found myself having to abandon what I thought I would be doing,” says Shayna Swanson, a trained aerialist and Cyr wheel performer. While she did get a few moments in the air, most her performance stemmed from her tumbling and acro background. Rodriguez Seanz  adds, “I had no idea how experimental it would be, even though I knew it was going to be experimental.” For Bailey Eng, a performer of many talents including contortion, dance, and Chinese pole, juggling was the theme of the week. “Sean juggled us; I felt like an object, but not necessarily in a bad way! What we were individually doing wasn’t important, but it was about being precise in time and space. Lots of randomness,” she explains.

Greg Tarlin, a veteran of the first Circus Sessions, had a unique perspective on the process. “The show we created with Fred [Deb] was more emotional. The show we created with Sean was more about structure, repetition, and patterns,” he says. Of this year’s experience he notes, “There were confusing times when I wasn’t sure what Sean’s vision was or what he was hoping for from us. There were frustrating times as we struggled to repeat complicated patterns and rhythms. There were satisfying times as we eventually became familiar with those tricky patterns which became easier.”

Preparations for Circus Sessions 2018 are already in progress. A call to artists will be shared via social media in the upcoming months. Circus artists from around the world that are prepared to challenge their thought processes and push their boundaries should keep their eyes open and apply to participate. “Onward with more creativity and strangeness!” says Chen, and what wise words those are. Writer, Performer -Canada
Jackie Houghton is a recreational circus performer, elementary school teacher, and freelance writer. When she is not teaching visual arts to school children, Jackie dreams about running away with the circus, but until then she is happy to write about it. She has been the exclusive writer for Femmes du Feu's Circus Sessions residency program for the past two years, and has also written for Circus Talk and American Circus Educators magazine.
You are about to enter a members-only zone.
To share this article on your CircusTalk member page and connect with circus professionals from all over the world, sign up now. It's free!
Sign Up
Already have an account?
Log in

Jackie Houghton is a recreational circus performer, elementary school teacher, and freelance writer. When she is not teaching visual arts to school children, Jackie dreams about running away with the circus, but until then she is happy to write about it. She has been the exclusive writer for Femmes du Feu's Circus Sessions residency program for the past two years, and has also written for Circus Talk and American Circus Educators magazine.