The Circus of Tomorrow is Full of Surprises for Today 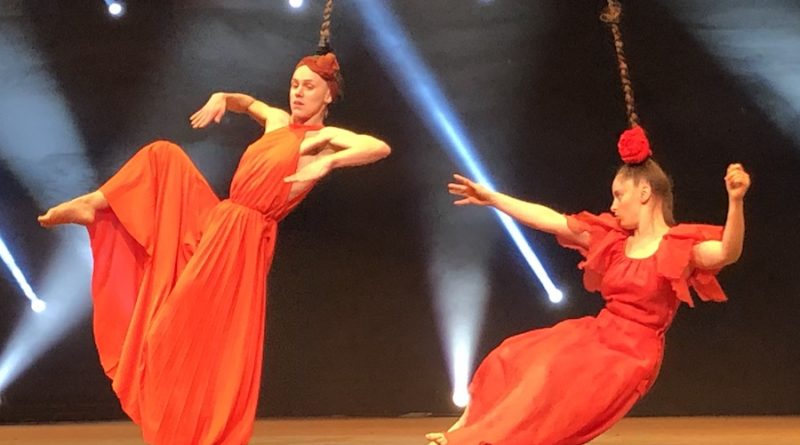 January of 2020 was my first visit to the Festival Mondial du Cirque de Demain, and it proved to be an adventure very different than the one I had expected. I had prepared for an experience like those I had as a performer at festivals in Wuqiao (China), Albacete (Spain), and Mexico City – lots of amazingly talented people coming together in a supportive community where luck and politics were part of the story of who left with a medal. The 41st edition of the “Festival of Tomorrow” proved to be all that, and more.

I was at the festival with two roles – I was a ‘puller’ for Elsa Hall, a NECCA graduate performing on the aerial straps, and a ClubPro member, so I had full access to the festival both backstage and at the ClubPro conversations. One ClubPro event was a presentation by Pascal Jacob, Vice President of the Festival, on the history of the event and how they select acts for the competition. Jacob said, “A lot of people have done things beautifully, for centuries (but) here, we want them to present things in a different way” and that it is “important when you leave the tent that the performer gives you the possibility to ask things about yourself. This is the important job of the producer. To transmit a question to the audience.” This year’s Festival certainly included presenting things in a different way and transmitting a question to the audience, sometimes by chance, sometimes by choice!

The performances were full of what one might expect from this circus – incredible skills, jugglers in street clothes sharing the backstage with hand balancers in blinged-out unitards, creativity and innovation, and unbelievably hard-working bodies. But it also included the unexpected including four events that were “never before” happenings at the Festival.

The first “never before” event was a reminder that circus performers are human, to be human is to fail, and failure in the circus can have potentially catastrophic results. During the first evening show, the Russian Bar act, Trio Tribarre, took to the stage with their playful performance that leaned heavily on the female performer’s bouncy character. After a slightly over-rotated skill, she landed off balance on the shoulder height bar, jumped down to the floor, continued the rotation into a “fish flop” shoulder roll, then lay still on her stomach. After a few moments of unease, her partners moved to check on her, and she began to shake from what seemed to be a concussion-induced seizure. Over 2000 audience members silently watched as an audience member with medical experience was invited on stage, and finally, someone from the Festival arrived to take charge.  Nearly 20 min later, as we continued to wait for the ambulance, audience members with tears on their cheeks began to leave and the emcee announced that the rest of the show would be canceled. Only after that did the ambulance team arrive.

Today, I know that Corinne Trottier had a mild concussion and would be released from the hospital less than 24 hours later, and be her bubbly self on our ride to the airport at the end of the festival.  But that night, with the team doing their job to keep her from moving as we waited for help to arrive, 2000 people were silently watching and imagining any number of difficult outcomes. It was a very hard night for Trio Tribarre and for the witnesses. In the lobby, I caught up with several NECCA graduates who were struggling with the experience, from the delayed emergency response to the unknown and perhaps life-changing ramifications for the performer to the implications reflecting on their own circus lives.

The next day one of the backstage team confirmed that they had never heard of such an accident happening at the Festival.  A member of the circus community commented that competition is about striving for the most difficult skills, and so it is inherently more dangerous than a typical circus performance. I was told that in France there is a requirement to have trained fire personnel on-site, but not emergency medical responders. I am curious about what may change in the festival’s emergency response plans in future festivals.

The second “never before” at the Festival event that happened was the disrobing of two performers. During the show that was not filmed on live-stream, the hair hang duo of Laura Stokes and Francesca Hyde ended their act by dropping their dresses to the floor below – something they hadn’t done in rehearsals.

Stokes had told me about their path to being at the competition. She and Hyde had explored hair-hang counter-balance but had no plan for performing. Then an art video about their collaboration was seen by the Festival organizers, who invited them to the competition. Despite their discomfort with the idea of competition and their surprise that an unfinished, improvisational act would be invited to this circus festival, they accepted the invitation. In all rehearsals, they performed their mostly improvisational aerial dance of suspension, partnership and a hint of comedy fully clothed in long flowing dresses. In the final moments they hung high above the audience and on this night they dropped their dresses, revealing 100% unclothed bodies.  As they were lowered down they cleverly turned their hair bows into short dresses so that by the time they arrived to the stage again they were fully dressed again.

Later, Stokes shared with me: “It was clear to us that the festival reaching out to invite us was very much connected to their need to represent some radical women.  In the end, this was the most exciting and beautiful way we could imagine to honor this invitation. Maybe it’s altruistic to say that we hoped by putting ourselves in an uncomfortable position we could budge against the boundaries of permissible and make a little more breathing room for everyone.”

The day after the ‘nude’ performance, Stokes and Hyde met with the Festival presenters, who, after admonishing the duo for not telling them about this choice, requested only that they wear nude briefs for the rest of the shows.  Interestingly, during the live-stream show (televised by Arte Concert) the previously videotaped nude version of the act was added as a cover for the intermission.

Stokes and Hyde were also the instigators for another ‘never before’ event at the festival.  The week of the performances included Brexit (UK) and the impeachment trial for President Trump (USA). Neither were excited to carry their countries flag in the opening flag ceremony and worked with the festival for permission for them and others to carry the rainbow flag that represents the LGBTQ+ social movement.

The fourth “never before” event happened the next day when performer Erwan Tarlet changed his act for the live-streamed show. In rehearsals and earlier performance, Tarlet’s act combined elements of traditional and contemporary circus. Wearing pointe shoes and black leather high waisted shorts, he started his act with a traditional jaw hang before transitioning to aerial straps. His skills included dislocates, made famous by Lillian Lietzel nearly 100 years ago. But for the live-streamed show he painted “Demain ?” on his body and, once pulled into the air, he spent the full duration of his music hanging by one arm, then by two arms, without executing any tricks — though the viewers seemed to appreciate that hanging by one arm is a special skill. We learned later that just before going on stage he posted on social media a notice with the hashtag #actforclimat:

Humanity hanging to its existence. But doing nothing to change… like the world today.

From the audience, there were a few boos, but they were drowned out by applause. Some of the other competitors felt Tarlet was stealing a spot from someone for whom the competition meant job stability and a solid future, their ‘tomorrow.’ Others thanked him for taking that risk. One suggested he could have made an act about the environment, instead of initiating a protest, as a way to better use and honor the festival stage. A few days later, back at NECCA, students and coaches were discussing the act and considering our impact as performers on climate change in a way we would not have if the action had been less controversial.

Pascal Jacob, when he explained how they select acts for the Festival, quoted opera director Patrice Chéreau saying  “I don’t need to like it but it obliges me to ask questions.” In this respect, these three “never before” events, in their different ways, fit into the Festival’s mission. It takes ‘tomorrow’ to see how these events will carry us into a new circus future. Will the Festival change their approach to emergency management? Will pushing against the “boundaries of permissible” and radical feminism in the art of circus become more acceptable?  Will you change your habits and help to save the environment so that we can all share more circuses of tomorrow? Educator, Performer -USA
Elsie Smith specializes in performing and teaching aerial skills. She has performed with many well known companies including Cirque du Soleil, and received a Special Award at the China Wuqiau Internat'l Circus Festival in 2007 and the Bronze Medal at the 1st Internat'l Festival de Circo en Albacete, Spain in 2008. She is the co-founder of the New England Center for Circus Arts and runs a performing company, Nimble Arts, with her aerial partner and twin sister, Serenity Smith. She also consults in aerial safety matters with the AYCO/ACE, judges at circus competitions and co-created the NA Aerial Teacher Certification Program. In 2016, she and her sister won the American Circus Educator’s Award for Excellence in Education and the Walter Cerf Medal for Outstanding Achievement in the Arts from the Vermont Arts Council.
Elsie's profile
You are about to enter a members-only zone.
To share this article on your CircusTalk member page and connect with circus professionals from all over the world, sign up now. It's free!
Sign Up
Already have an account?
Log in

Elsie Smith specializes in performing and teaching aerial skills. She has performed with many well known companies including Cirque du Soleil, and received a Special Award at the China Wuqiau Internat'l Circus Festival in 2007 and the Bronze Medal at the 1st Internat'l Festival de Circo en Albacete, Spain in 2008. She is the co-founder of the New England Center for Circus Arts and runs a performing company, Nimble Arts, with her aerial partner and twin sister, Serenity Smith. She also consults in aerial safety matters with the AYCO/ACE, judges at circus competitions and co-created the NA Aerial Teacher Certification Program. In 2016, she and her sister won the American Circus Educator’s Award for Excellence in Education and the Walter Cerf Medal for Outstanding Achievement in the Arts from the Vermont Arts Council.