The Contemporary Circus and Immersive Arts Center in Troy, NY: An Example of Emerging Scenes for the Circus Arts in the US 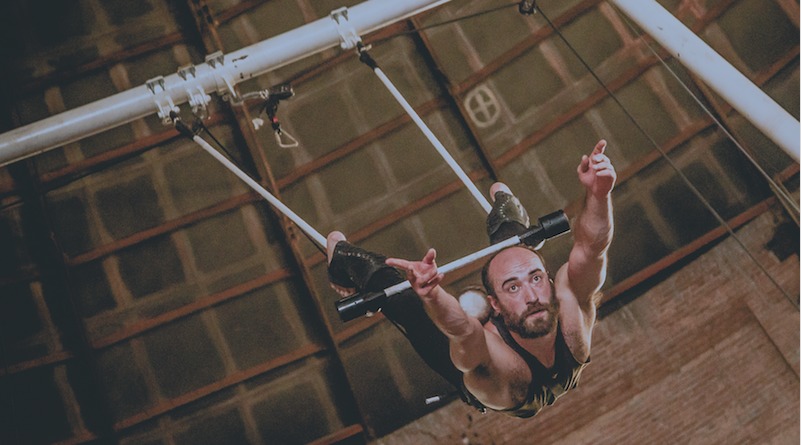 What do an architect, a financial lawyer, an actor, a proprietor of a historic-home-turned-B&B, a professor of French and performance studies, a school leader, and a project manager for a painting company, all based in and around Troy, NY, proudly boast of creating together? Even as the answer may surprise many in an America, where contemporary circus arts do not yet enjoy broad public awareness or acclaim, this group from widely varying professions found ourselves – along with a few other community leaders — drawn to create an organization to promote, produce, and present contemporary circus and other immersive arts.  As founding members of the board of directors of the non-profit CCIAC (our newly-formed Contemporary Circus and Immersive Arts Center), we each had seen various locally produced shows, many of them directed by Aaron Marquise, a Troy-based graduate of the National Circus School of Montreal (ENC). We happily recognize that it wasMarquise’s work and leadership that pulled this diverse group together, and, now, Marquise serves as the CCIAC’s executive director as we find ways to give to the circus arts increased presence in our area and beyond.

On September 27, 2019, the CCIAC offered its inaugural performance of  Roadkill, a 45-minute show featuring swinging trapeze artist and Marquise’s fellow National Circus School graduate Cooper Stanton. Staged in Troy’s open-air Prospect Park,Roadkill  depicted moments of the life of a wild fox through acrobatics, juggling, unicycling, and acro-dance accompanied by a musical score that varied from pop to electronic dance music and rhythms from New York’s voguing balls. Troy’s nineteenth-century Gasholder Building, listed on the National Register of Historic Places with its red-bricked round exterior and soaring open interior, served as the rehearsal space. It was this building that inspired Marquise to return home to the Troy region and to establish the CCIAC. Indeed, the CCIAC’s committed connections to the historic Gasholder has earned the organization some attention internationally as we imagine a full-time venue dedicated to presenting and producing circus arts in the United States; on top of taking advantage of the building’s unique character for rehearsal space, the CCIAC is also considering staging a production in the Gasholder in 2020.

With  Roadkill, CCIAC debuted our Artist First Program, a residency designed to nourish an artist’s creative vision from conception to presentation by providing tools, resources, and space in and around Troy, along the way giving the artist experience with production coordination and budget management. For this production, Marquise, Stanton, and the CCIAC received grants and other sponsorship from various organizations in New York, including the New York State Council on the Arts, the Upstate Coalition for a Fairgame, the Arts Center of the Capital Region, and the Friends of Prospect Park. With such support, the CCIAC reports a balanced budget for our first year of activity — good news for any burgeoning arts organization but particularly heartening for one that features contemporary circus arts.

As we do our work, the CCIAC wishes both to inspire and draw inspiration from other organizations in the goal of building audiences for contemporary circus productions as well as supporting contemporary circus artists and their creations. Stanton’s skill of engaging the public throughout the creation process, from the open rehearsals to the highly interactive shows (an audience member’s dog barking loudly in the park during one of the scenes was fodder for inspired improvisation), helped serve some of the CCIAC’s intentions: more people of multiple generations have some understanding of and exposure to not only the art but also the craft of a circus performance.

Even asRoadkill  was the CCIAC’s first general-audience event, Marquise himself created and starred in his own one-person show,Oh Garçon!, as the group’s very first production in the weeks precedingRoadkill. Marquise, who trained in clowning, portrayed a bumbling, red-nosed, white-faced waiter at intimate dinners in various hosts’ homes around Troy in an immersive experience that featured juggling, mime, and bilingual French and English word-play and mimicry. With the CCIAC explicitly wanting to build buzz for our work even prior toRoadkill,Oh Garçon!  garnered attention primarily through word-of-mouth and, in a boon for the organization, it ultimately sold out all seats available and gained recognition beyond Troy and New York’s Capital Region. The show has now also been presented in Newport, Rhode Island, as the inaugural show for a theatrical arts company in that area that seeks to provide immersive performance experiences to new audiences.

With such support, the CCIAC reports a balanced budget for our first year of activity — good news for any burgeoning arts organization but particularly heartening for one that features contemporary circus arts.

As we enter 2020 and recognize the funding and audience-building challenges related to establishing a contemporary circus arts organization in the US, Marquise and the board of directors of the CCIAC plan to build on these initial successes to set up and partner with a series of productions and activities that bring circus to even more people. In January, for example, we will sponsor a social evening featuring circus specialists during the Albany, NY, performances of Cirque du Soleil’s arena show  Ovo. In February at Holy Cross College in Worcester, MA, Marquise and Batson (one of the CCIAC’s founding board members), will do a reprise of an academic and creative talk/performance we have given at Union and Hamilton Colleges, exploring Québec’s place as a hub of the “new” in the new circus arts. In March, the CCIAC has been invited to present a performance in a new venue in Saratoga Springs, NY, as a first collaboration between the CCIAC and the Philadelphia-based circus school Circadium. Indeed, the CCIAC hopes to take even greater advantage of its location in the Northeast along an axis from Philadelphia through New York City to Montreal, and those areas’ multiple and vibrant communities of contemporary circus artists, as we seek to bring this art form to yet more American audiences. As we do our work, the CCIAC welcomes yet more collaborations and opportunities in our goals to promote, produce, and present contemporary circus and immersive arts. Even as we continue to build towards our own dream of a full-time performance venue dedicated to circus arts, we are pushing forward on presenting work and collaborating with circus artists to bring their performance dreams to life. Watch for upcoming announcements about our events and future projects! Circus Artist, Director -United States
Aaron Marquise was born and raised in Round Lake, New York. He grew up performing at the former New York State Theatre Institute in Troy, NY, where he also spent his senior year of high school as an intern. Continuing a career in theater, Aaron went on to study Musical Theatre with a minor in Playwriting at Marymount Manhattan College in NYC. After discovering the circus world, Aaron auditioned at the prestigious National Circus School in Montréal, Canada where he graduated in 2015. Since joining the circus world, Aaron has had the opportunity to perform in Quebec, France, Switzerland, and Germany. In 2019, Aaron founded the Contemporary Circus & Immersive Arts Center in Troy, NY where he currently serves as the Executive Director. In the fall of 2019, Aaron served as a Production Assistant to the Creative Team on the national tour of Disney’s Frozen. Various directing credits include PB & J Café: Stuart Little, James and the Giant Peach, Jr., assistant director/circus consultant for Pippin and assistant director for Les Misérables all for the School of the Performing Arts at Proctors. He is currently the Arts Education Manager at the School of the Performing Arts at Proctors and theREP.
You are about to enter a members-only zone.
To share this article on your CircusTalk member page and connect with circus professionals from all over the world, sign up now. It's free!
Sign Up
Already have an account?
Log in