The Element of Language of French Contemporary Circus Artists 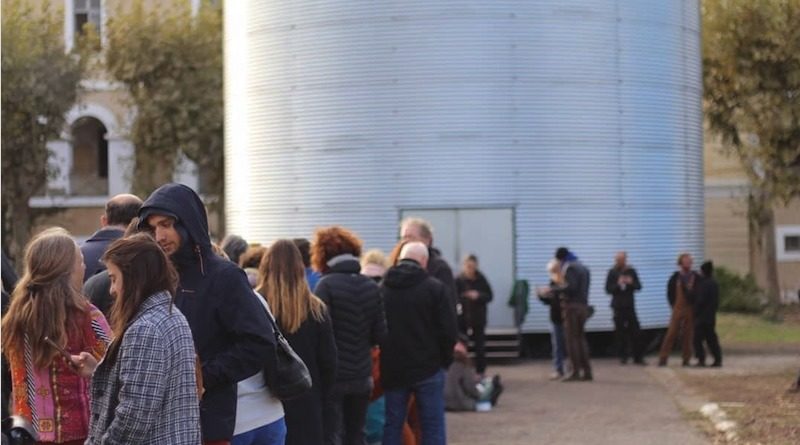 In times of climate catastrophe, refugee crises and Covid-19, the question of the responsibility that artists and scholars have is becoming increasingly urgent. What is the role of circus within society? How far does this form of art and entertainment correlate with historical and contemporary social interests? How does circus research position itself as a relevant field of research within academia in the 21st century? Those questions will be explored within the series Adventures in Circus Research. Facing a New Decade, curated by academic Dr. Franziska Trapp. By featuring circus researchers, we give them the space to explain the nature and significance of their research directly to the circus community and to highlight the practical impact of their research on the circus world and its relevance for society.

In the fifth article of the series, Léa de Truchis, Ph.D. at the University of Montpellier, provides insights into her research in which she analyses the self-presentation of circus artists in “feuilles de salle” (printed papers distributed before the shows with the main information), program booklets and production files she collected during her travels to French festivals. While analyzing the vocabulary used in these texts, Léa de Truchis discloses a softened circus discourse that is less interested in the representation of the superiority of mankind but rather concerned with the presentation of humanity.

The idea of doing a Ph.D. about circus came up after hours of discussion with my sister. We were talking about shows we saw. Thereby, she was using her own vocabulary–the vocabulary of a  circus artist–and I was using mine–the expressions of a student in theatre studies. I discovered she was using terms that derive from the field of theatre in order to talk about circus, such as dramaturgy, but she used them in a different way than I was used to in my research field. This is why I started my thesis with the idea of analyzing and understanding the elements of the language of circus artists, for example: How do artists define themselves? Which notions do they use? And what do those notions reveal about the recognition of circus artists in French society?

While answering these questions, I had to face the challenge of analyzing an art form that is defined by its diversity. As Marine Cordier proclaims: “While it is generally difficult to define the outlines of an artistic sector, the production of statistical data is even more difficult when it comes to the circus, due to the itinerant nature of the companies, but also because of the difficulties in defining the relevant criteria to describe a sector that is in the midst of restructuring[1]”. I decided to rely on the textual data created by the companies themselves: the “feuilles de salle”, the festival program booklets and the artistic files of all the shows I saw from 2017 onwards (At the moment I do have a collection of 150 shows).

In fact, the corpus of my investigations is based on communication tools around the performances seen, and it is these “short sentences […] whose production aims to make the discourse accessible to the greatest number[2]” that interest me in understanding how artists describe the circus today to the public and institutions. What is part of the circus vocabulary? What are the elements of language that come up in the various media that are available to the audience (“feuilles de salle”, festival or season programs, production and/or distribution records, and interviews)?

So one of my investigations focuses on the discourses produced by the artists on their shows and on their professional circus practice. In order to question the artists’ speeches, I therefore relied on the “feuilles de salle” and festival or season programs that I was able to retrieve during my experience as a spectator since September 2017. I collected those texts during festivals, I read them over and over again, identifying the words which were the most recurrent, and finally I made a manual survey (according to a precise methodology of semantic survey) of the terms identified in order to build statistics. The words identified were divided into three categories: the formats and disciplinary areas describing the shows, the functions and skills of the artists stated in the texts, and finally the most recurring themes in the descriptions.

For the most recurring themes, five categories of words came up in half of the room sheets: “body”, “life”, “play”, “movement” and “laughter”. However, while in the production files it is the idea of “life” that comes up the most, in the room sheets it is the “body” that is most frequently used, and in the festival programs, it is the category of “laughter.” I realize that the three corpora do not insist on the same elements: the first ones give the main idea of the show, the second ones describe the elements of the show and the last ones set the tone. Each medium has its own utility and purpose, and targets a different public.

In addition to these five recurring terms, I also find themes, such as that of risk (risk, balance, fall), that of softness (grouping together the categories of poetry, language, emotion, fragile, and intimate) and that of tradition (collective, circle and virtuosity). Throughout the list of the most frequent terms, one notes a diversity of themes and at the same time a coherence in the set of words used by this corpus of shows. These language effects tend towards a softened circus discourse, that is less interested in the representation of the image of mankind and its superiority, but rather concerned with the presentation of the human, of a simple humanity.

Circus has moved from an aesthetic of the superman to an aesthetic of the banal, and it is the poetry of the banal that is emphasized (intimacy, everyday life, objects, fragility, body, language): today the circus makes itself accessible, no longer through the brilliance of surprise but through an aesthetic of the identification with the acrobat. Through the study of the vocabulary used in program booklets, files and room sheets, I therefore imagine the expression “aesthetics of the ordinary”, which values the spectator’s identification with the acrobat despite the circus techniques: the circus becomes an extra-ordinary material for dealing with ordinary life. Also, I note that the panorama of circus performances seen for this survey tackles around common notions, despite the artistic diversity of this panorama.

Therefore, we can admit that French contemporary circus has topics that reveal a certain perspective on society, but not with an open political commitment, even though many shows evoke themes like ecology or gender issues. “Commitment” is not a word that comes up often. Does that mean that French circus artists are not committed? My guess is no, but it would be interesting to look at the status of the circus artist within French society to interrogate its impact as a committed artist. This begs the question, can French society take the ideas of a circus artist seriously? Circademics/Historian -France
Léa de Truchis is a PhD researcher in performing arts, questioning specificities and identities of French contemporary circus. She does her research by travelling around France from festival to festival, as a volunteer or as an intern (with La Brèche in Cherbourg, La Verrerie d'Alès, and Occitanie fait son cirque in Avignon, but also with the company Akoreacro), to meet circus artists. At the same time, she teaches circus history and performance analysis at the University Toulouse Jean Jaurès and the University Paul Valéry Montpellier 3.

Lea's profile
You are about to enter a members-only zone.
To share this article on your CircusTalk member page and connect with circus professionals from all over the world, sign up now. It's free!
Sign Up
Already have an account?
Log in

Circus Performers We Need You!