The (Graduation) Show Must Go on at École national de cirque 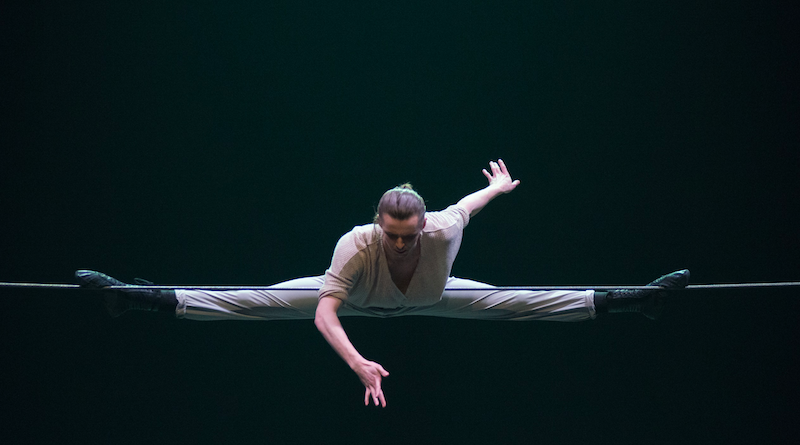 It’s perhaps an understatement to say that the École national de cirque has an awful lot on its plate right now.

At 1 o’clock on a recent sunny afternoon in mid-May, disgraced former ENC coach Marcelo Berti Marques was being escorted from his jail cell to begin his bail hearing. He has been charged with luring children, inciting sexual contact, making sexually explicit material available to a child and possession of child pornography.

Uptown, at precisely the same moment, the doors of the École national de cirque were flung open to national and international media—not to discuss the sex crime allegations but for a preview showing of the school’s upcoming graduation season performances.

For the beleaguered school, it was clearly a case of “the show must go on.”

As in previous years, the graduating students have been split into two groups to devise, rehearse and perform two different shows under the guidance of seasoned directors. These highly-anticipated performances, staged on alternating nights at the famous  TOHU pavilion, typically attract upwards of 17,000 spectators each year.

The first of the 2018 shows,Sapience, directed by Anthony Venisse, features energetic twitchy music and a crammed cornucopia of disciplines including aerial straps, juggling, hoop, Chinese pole, silk, aerial rope, balancing and tight wire. It’s described as “an archaeological dig, a rappel downwards into the labyrinth of what makes us human.”

Brin Schoellkopf, a graduating student, specializes in tight wire, and features prominently inSapience. The 21 year old, who hails from Vermont, got his start in circus through gymnastics and the well-known Vermont youth circus programme,  Circus Smirkus.

For Brin, specializing early in his discipline was a boon to his technique, and he says his four years at École National de Cirque were “perfect.”

“I really knew that I wanted to focus on tight wire and have that be my main discipline. What was great about the school, and about coming to Montreal in general, was being in a city where there’s so much going on. I started going to a lot of dance shows and circus shows and got a lot of inspiration from that.”

The second of École national de cirque’s 2018’s offering is Barok XXI. Directed by Peter James, an interdisciplinary artist who works across theatre, performance art and circus, Barok XXI provides a showcase for an array of disciplines: juggling, aerial rope, cloud swing, Korean board, ball acrobatics, aerial straps, swinging trapeze, dance trapeze, Cyr wheel, and silk. The general approach seems to be both playful and daring, making one point crystal clear: these kids have no fear. For Barok XXI, James found a thematic starting point that is simultaneously bleak, artistically rich and perhaps even topical (if you’re a pessimist): the end of our civilization.

“I’m a fan of post-apocalyptic American independent movies, or science fiction, fantasy… I do believe that it’s the end of our civilization anyways so we might as well get prepared and have different scenarios before it happens!” James says, tongue only half in cheek.

“I said okay suppose—I don’t want to know what—but something happened, like a cataclysm of some kind. Maybe it was natural, maybe it was war, we don’t have to know, but nevertheless something happened and we’re not the same anymore. Maybe we’re the only ones left. So we’re trying to reinvent ourselves, our rituals.”

James is thrilled with the diversity of talent coming through the ranks this year.

“If there’s one thing I love about this course, it’s the diversity—(we have) people coming from all over the planet. Québécois kids are meeting Japanese kids or meeting Swedish kids or meeting Italians… And they’re coming from all sorts of backgrounds; poor, rich, bourgeois, very cultivated, no culture. And that’s great because that mix is amazing. This, for me, isun cadeau, a gift.”

The École national de cirque, which was founded in 1981, offers a complete range of professional training in the circus arts, from preparatory to High School and Circus Studies (DES) to college-level (DEC) programs. Also on offer are three college diploma programs (AEC) for circus arts teachers.

The school has more than 150 full time students from 20 countries. Each year, around 25 circus artists and 30 instructors graduate from the school. More than 95% of these students find jobs in their fields within months of graduating with national and international companies including Cirque du Soleil, Cirque Éloize, Les 7 Doigts, Dragone, CIRCA, and Cirque Le Roux.

Don’t miss your chance to see the 2018 graduates on the cusp of their professional careers; booking details are below.