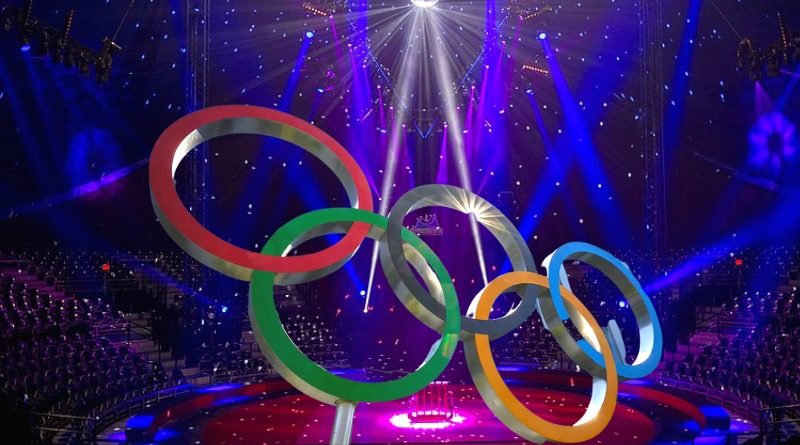 What do the circus and the Olympics have in common? There are obvious answers like action and excitement, suspense and mastery, but there is more–a history of cross-pollination even. Some of the circus disciplines themselves cross over into Olympic sports (trampoline anyone?) and some of the Olympic sports cross over into circus (BMX has been featured in Cirque du Soleil’s Volta for example). Don’t forget the opening and closing ceremonies of the Olympics, the exact type of spectacle for the large-scale shows of the circus. There is a precedent of directors hired on to produce the ceremonies, and circus artists themselves with specialized skills that play well to a huge crowd, such as Joe Dieffenbacher, physical theater teacher and director who appeared in and co-created Closing ceremony sequences for the 2012 Olympics and Paralympics in London.

In 2018, Reuters reported on how some Olympic athletes felt drawn to circus after the fanfare of one’s life goals being achieved had faded, claiming Cirque du Soleil hired 17 Olympians, stating “Gone will be the routine, the sports funding and the support system that sustained them. Some will return to school, some will move into the coaching ranks — and some will run away to join the circus.” The New York Times reported similarly in their article titled For Some Athletes Olympic Rings Give Way to the Circus Rings, back in 2016.

Athlete turned circus artist Laura-Ann Chong is certainly committed to following events—she’s been waking up every morning at 3am to catch the live gymnastics coverage coming from Tokyo. “The Olympics has always meant a time of global unity to me. Although countries are competing against each other for medals, the camaraderie demonstrated by the athletes and the sheer will to reach a common goal does something magical to everyone watching, near and far. This is not unlike what circus does. We put shows on to transport audiences through a common journey and our arts can speak to people from every country, in any language. As a former elite gymnast and alternate for the 2004 Olympic Games to then performing globally with Cirque du Soleil, it’s the assembly of our world citizens and celebration of human excellence and triumphs that get me excited for the Olympic Games every cycle.”

The pipeline from sport to circus and circus to sport has been established–and circus folks around the world are no doubt as on edge as the rest of the Olympic fans waiting to see how this Olympics will go down during a pandemic year where, just like in the performing arts world, live in-person performance and audience attendance will be scant to nil.

In the spirit of this camaraderie and connection, during the Olympic weeks fromJuly 23-August 8th, CircusTalk will keep you posted on the happenings that foster these sport and circus world connections.

It was a predictable bumpy start in a pandemic year for the Olympics in Japan in 2021 (even the official logo design still says 2020). Opening ceremony challenges to adjust to a smaller audience, an creative director fired right before the ceremony for making an offensive joke, COVID-19 super spreader concerns raised by citizens of Japan, it all added up to what The Washington Post considered to be a lackluster launch. Perhaps the most athletic prowess at the opening ceremony was the impressive drone display that recreated the globe in lights, but the dance sequences by humans, scaled-down for televising and not for enormous crowds, did cross into acrobatics upon occasion.

Soon the action began, but not before Covid arrive Athletes in the Olympic village were said to have tested positive for Covid and were forced to drop out, according to CNN coverage.

Nevertheless, enthusiasm among the athletes and on the world stage remains high for the events that have unfolded during the first week of competition.

The biggest news in week one for the USA Gymnastics team also has repercussions that will reverberate around the athletic and performance world for years to come–when the most beloved and decorated gymnast Simone Biles withdrew from the competition on Tuesday, July 27th. She explains why in the press conference, citing the need to focus on her mindfulness and step back to allow her teammates to have a chance at the gold. Biles’ emphasis on her mental health in the face of enormous pressure and high stakes landed at the exact right time in pandemic fatigue for some athletes and performers, inspiring a change in perspective the prioritizes the individual over their achievements.

That’s a wrap on the 2020 Tokyo Olympics! The closing ceremony reflected the emotions of a postponed Olympics, and celebrated a coming together of cultures while paying homage to their Japanese host country. The ceremony wrapped up with a nod to the home of the next summer Olympics: Paris.

This year’s Olympics closes with the United States taking home the most gold medals, followed closely by China.

Visit NBC Olympics for highlights and videos from each sport.

Once again, the Russian Olympic Committee won gold in both the duet and team competitions. This makes them the reigning winners in this sport since 2000. China’s duet swimmers Huang Xuechen and Sun Wenyan took home the silver medal, an extra remarkable achievement as Xuechen recently became a mother. The bronze medal was awarded to Ukrainian swimmers Marta Fiedina and Anastasiya Savchuk. This is Ukraine’s first Olympic medal in artistic swimming. Artistic swimming was short one entry this year, as Greece’s swimmers tested positive for COVID-19.

This year in diving, Can Yuan won another gold medal – this time in platform diving. This follows up his gold medal in springboard in Rio, making him the first man to win in both platform and springboard since Greg Louganis. In humorous diving news, British diver Tom Daley was shown passing time during his competition by knitting. Daley took home a bronze medal this year.

The United States rhythmic gymnastics team did not qualify for the finals.

Simone Biles has returned to the competition floor, vying for an individual medal on the balance beam. In an effort to avoid the “twisties,” Biles swapped her full-twisting double back tuck dismount for a double back pike. Her performance on the beam won her the bronze medal, her seventh Olympic medal. On her reentry, Biles said, “It’s not easy giving up a dream of five years and not getting to do it. It was really, really hard. I’ve never been in the stands, so I just wasn’t used to it so to have one more opportunity to compete meant the world.” In Biles’ absence, Suni Lee won gold in the all-around, silver with Team USA, and bronze on the uneven bars.

Trampoline as an Olympic sport leans a lot on its similarity to the circus arts. Results for men’s trampoline are in: Ivan Litvinovich of Belarus takes home the gold. China’s Dong Dong was awarded silver, and New Zealand’s Dylan Schmidt will be taking home bronze. In other notable news, Dong Dong became the first athlete in the sport to have won four Olympic medals at four games.

In somber news, defending Olympic gold medalist Connor Fields took a pretty hard fall during the semi-final in the men’s BMX race on Friday. He appeared to make contact with another rider, and several cyclists crashed. No one else was seriously injured. According to NBC, Fields is conscious and stable but awaits further medical evaluation. At the time of the crash he had already qualified for the final.

In an article on Equishop titled Circus as the Cradle of Dressage, the author lays out the how classic circus truly defined the art form. In Tokyo, the riders and horses did the circus proud in an impressive display of equestrian skills. Germany took home the gold, the US took silver and Great Britain took bronze for dressage.

Looking at sports that have some circus crossover, and that resonate with adventurers and extreme sports lovers, this first week of the Olympics has been a fulfilling one, featuring men’s Archery, as well as men’s and women’s gymnastics, fencing and more.

The South Korean team won the gold for archery.

It was a joyous moment for the USA when the first American won the first-ever medal, let alone the first-ever gold medal in fencing with Lee Keifer on foil. (Check out her final hit and the pure joy it brings at 3:10 in the video if you need a boost today.)

The big story with skateboarding at the Olympics this year is that it exists! 13-year-old Momiji Nishiya (Japan) won the honor of not only being the first gold medalist in skateboarding but also the youngest gold medallist in Olympic history, winning the gold in street skateboarding. Her counterpart teammate on the Men’s team, Yuto Horogomi also won the Gold for Japan.

In diving that would give any Vegas show a run for its money,China’s Wang Han and  Shi Tingmao won the gold in synchronized 3m springboard.