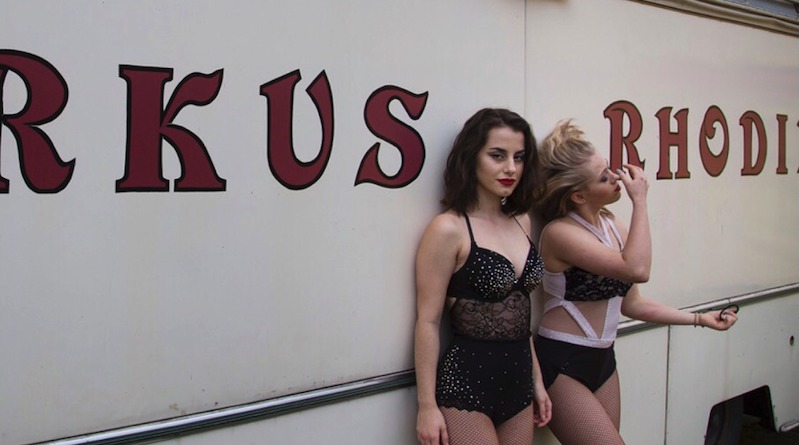 For all of the ills and vices we are told social media elicits, every so often it does in fact produce moments of wonder, contemplation, inspiration, or best of all, a pleasant relationship. I have Instagram to thank for acquainting me with the woman whom the Swedish press has christened,The Last Circus Princess, Simona Yulia Rhodin.

From the moment her image swept across my timeline, I could hardly have realized I was gazing upon circus royalty, and yet, I suppose I should have known better. My initial impression of the seventh generation circus artist was that she was a fascinating paradox. She is unquestionably  captivating, yet, she emits a regal kind of innocence. She is prodigiously poised, as displayed in the numerous images and videos, which feature her particular skill set – hula-hoops, low wire, and magic – and yet, she is as frivolously playful as her youthful aura suggests. She can fly (or at least she once did, until she was injured during a performance), yet, she is charmingly grounded. “The accident was a gift actually,” she said. “I didn’t want to do aerial anymore,” she laughs. Yet, with all her blessed gifts and allure, it was, in fact her name, Rhodin, which intrigued me most.

While covering a story about the legendary King Charles Unicyle Troupe from the South Bronx, NY USA (the first Black American act ever signed to Ringling Bros. and Barnum & Bailey) I learned about the one and only, Trolle Rhodin, who was acting as a talent scout for The Greatest Show On Earth during the 1960’s. It was Rhodin who was the first to engage Eastern bloc nations and bring their talents to the west, namely the United States of America, for Ringling Bros. and Barnum & Bailey.  “Trolle loved [The King Charles Troupe] and thought they would be great for the show,” remembered the Rev. Bill Minson, who was the troupe’s manager at the time. Unfortunately, this was a few years before the great Rock N’ Roll promoter Irvin Feld would acquire the reigns of Ringling Bros. and Barnum & Bailey and usher in a far more diverse and inclusive era at The Greatest Show On Earth.

Although, Trolle Rhodin (1917 -1997) and his wife, the “Queen of Dressage” Ingeborg (Gautier) Rhodin (1929-2015) (who dazzled American circus fans for years with her equestrian brilliance atop ofBaby,her beloved and majestic white Lipizzaner stallion),would surely make an indelible mark on Ringling, their presence in circus lore coupled with their iconic lineage spins an astounding epic for which no single article could do justice. It was Jean Baptiste Gautier (1758-1823), who birthed the Gautier circus dynasty and who brought the first elephant to Sweden in 1804. It is believed that he and his family were displaying elephants throughout Europe as early as 1779.  Carl Rhodin, aka Brazil Jack (1871 -1952), established Cirkus Brazil Jack in 1899. With such a storied history, the Last Circus Princess, is in fact, an appropriate moniker for my Instagram pal, Simona Yulia Rhodin. Needless to say, I should have known better, when I encounteredroyalty.

It was in 2014 when acclaimed photojournalist, Åsa Sjöström began documenting Cirkus Rhodin for one of the largest publications in southern Sweden. “I was fascinated by the story of four women, from different generations struggling to maintain the traditional circus, in a vehemently anti-circus climate (due to the inclusion of animals),” said Sjöström. Åsa Sjöström’s fascination has now progressed into a feature length documentary film, entitledThe Last Circus Princess,which is due for release in 2020. “I’m excited about the documentary as it brings up the issues we face,” said Simona. I know first hand, that it is, in fact, a rare gift for the genre of circus to be presented through a humanized lens. I can think of no other field of endeavor or profession whose very name evokes such degradation, as does circus. I utterly dread the American political campaign season, as we are sure to be subjected to the repeated disparagement of the word and its participants, specifically, clowns.  “The new media has had a detrimental effect,” said Diana Rhodin, daughter of Trolle and Ingeborg Rhodin. “The Circus Festival of Monte Carlo used to be an annual television event. It hasn’t aired in over a decade. The only time we see anything about circus on television, is when it is negative,” exclaimed Diana.

As the star of Cirkus Rhodin, “Simona is coming of age carrying this beautiful legacy on her shoulders,” explained Åsa Sjöström “If it weren’t for her, I’d pack it up,” said Diana. “I’m 60 plus! Why would I want to do this?” pondered Diana. “My thing is training animals – I have three ponies and a dog. Simona is the star feature, next to the dog,” she laughed. As anyone who’s ever worked a show with animals knows, the four-legged mammals always get top billing, no matter how talented the two-legged mammals may be. Simona is being groomed to eventually take full reign of Cirkus Rhodin, as she has been granted creative license in the conception of its most recent productions.

Simona’s mothers, Diana and her life partner, Irena (Simona’s biological mother), are doing much of the heavy lifting in fighting for the right of their circus to exist. While Diana is at the forefront as both circus boss and premiere animal trainer and presenter, Irena, who is a product of the renowned Moscow State Circus School, handles the administrative logistics of the show. She isn’t as vocal as Diana, but her presence is just as vital to the maintenance of Cirkus Rhodin. “She is constantly in the background, but she is the one who keeps the little family in order,” said Åsa Sjöström. Diana doesn’t suffer fools. She commands respect, reveres her family’s heritage and adores her animals. She also has a wicked sense of humor. For a time, Ingeborg would reside and travel with her family on Cirkus Rhodin. “It’s a generational story. The greatness of the circus and what it was and what it is now,” said Åsa.

Simona chuckles as she recalls a scene in the documentary that details one of the many challenges of keeping the show up and running. “Diana is on the phone attempting to book a date when the caller says, rather condescendingly ‘You’re welcome to come with your little circus. The first day we charge €700 EUR to stand there!’ Diana burst into laughter because the price was so ridiculous,” she recalled.  The daily effort of ensuring theshow goes onranges from the fiscally and logistically challenging to the outright absurd. “There was this peculiar little town, which we refuse to go to anymore, where some pseudo-important man accused members of our company ofshittingin the woods, as if we don’t know how to use a restroom,” said an astonished Diana with a chuckle. “He actually put this on Facebook,” she continued.

As a respected animal trainer from a family of celebrated animal trainers, contending with the well- funded and publicized animal rights contingent is a unique kind of tribulation that is, unfortunately, despite the well-documented science on the matter( most notably the work of Dr. Marthe Kylie Worthington and Dr. Ted Friend), all too common. Diana Rhodin doesn’t mince words on the issue. “When people say ‘You shouldn’t have animals in the circus,’ I tell them, ‘You should really get to know the animals then you won’t hate them so much,’” she mused. “’I don’t hate animals!’ they always say. Then why don’t you want them to have a life – to work or be occupied? Why don’t you want that for an animal if you love them so much? Every horse I’ve had, had a purpose and they knew what their purpose was; and that’s how it is in life. Everyone has to work and be occupied, because when you do, you serve a purpose,” she concluded.

Cirkus Rhodin is one of only two family circuses that remain in Sweden. The other is Cirkus Brazil Jack, who discontinued the use of animals in 2018, a point of deep contention for Cirkus Rhodin, particularly for circus boss, Diana. “I don’t understand it. I don’t know what happened,” she said somberly. Yet, she is defiant in her unyielding belief of animals and their place in the circus. “When the last horse leaves the ring, there is no circus,” declared Rhodin. “If you don’t have animals, it’s a variety show,” she scoffed.

Åsa Sjöström would spend over four years documenting the life, times, and struggles of these remarkable ladies and their circus. On November 19, 2015, just over a year into this endeavor, the beloved matriarch, Ingeborg Rhodin passed away. “While Simona is the focus of the film, Ingeborg is ever present,” said Sjöström. For the documentary, Åsa was granted access to an extraordinary archive of films recorded by the late Trolle Rhodin, which date back to as early as 1943. “We are able to show Ingeborg at the height of her fame, as well as her life in and out of the circus ring,” said Sjöström.

There’s a glorious defiance in how the ladies of Cirkus Rhodin dare“…not go gently into that good night[1]” “They are really strong and independent. They are doers,” said Sjöström. It is truly a radical act of faith established by predecessors from long ago. It is the ultimate declaration of liberty as they determine their existence in spite of a world that appears to grow more and more cynical by the day and seems to have no place for wonder or at least the kind of wonder that is unique to circus in all its fullness and tradition. Yet, here they stand, emboldened by the spirit of generations past and an epic heritage, while an unfolding legacy is ever present in the person of Simona, the embodiment of what the future may hold for Cirkus Rhodin and the culture of circus in Sweden. Will she in fact, be the last circus princess? For the sake of Cirkus Rhodin and an industry in peril the world over, may the words of P.T.  Barnum ring eternally true: “As long as there are children, there will always be a circus.”