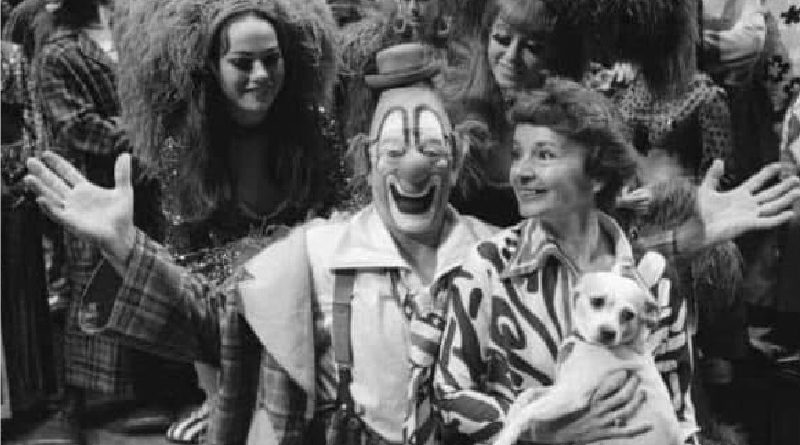 The staff and board of directors of the John and Mable Ringling Museum were deeply saddened to learn of the passing of Jean Rockwell Jacobs. Mrs. Jacobs was born in New York City and started her career as a Conover model. Jean was recalled as a beautiful woman with bright, sparkly eyes. She joined the Ringling Bros and Barnum & Bailey circus in 1952 with a revolving ladder act. During a mishap in a 1953 performance at Madison Square Garden, she fell 30 feet. Her performing career was over, but a new chapter in her life opened when she married Lou Jacobs, a famous and beloved master clown. Jean and Lou had two daughters; Lou Ann and Dolly Jean. Dolly Jacobs and her husband Pedro Reis have carried on the tradition and spirit of the circus through the Circus Arts Conservatory. The CAC partners annually with The Ringling in the production of Summer Circus Spectacular. Lou Ann Jacobs Barreda and her husband offer an educational animal encounter with their African elephants at Wilstem Farm in Paoli, Indiana.

Heidi Connor, Chief Archivist at The Ringling has several remarkable photos of Mrs. Jacobs. In one, Jean is enjoying lunch with general director of performance, Pat Valdo and a group of performers in the cafeteria at the Winter Quarters in Sarasota, Florida, 1952. This photo was taken by Stanley Kubrik while on a photoshoot for LOOK Magazine at Winter Quarters shortly after Jean joined the circus. The other photo, dated 1975, is a Ringling Bros and Barnum & Bailey Circus promotional shot of the entire Jacobs family in the circus ring – Knucklehead the dog, Lou Ann, Dolly, Lou and Jean. These images are held in the Archives of the John and Mable Ringling Museum of Art, Personal Papers of Bill Ballentine, 1911 – 1999. Connor remarked, “Reaching out to the circus community, everyone‘s first comment on Jean is how nice and gentle Jean Rockwell Jacobs was – just a great person.”

Jean’s life will be celebrated at 10 a.m. Saturday, July 18 at the Sailor Circus Arena, with entombment following in Sarasota Memorial Park. For those wishing to participate virtually please use the following link here.