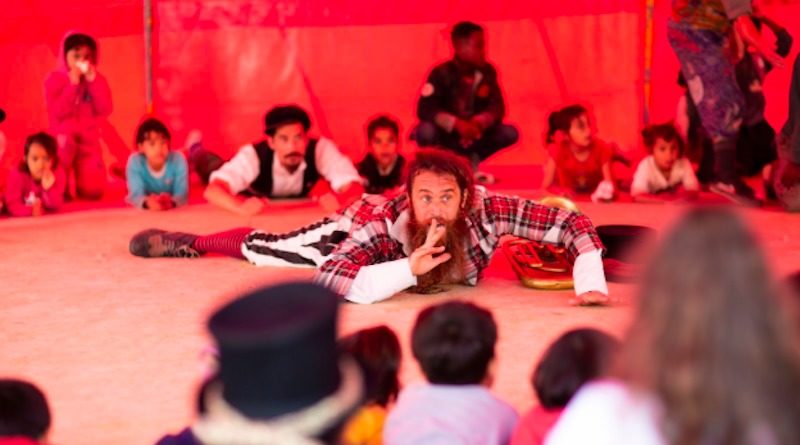 Based in the UK, but with an outreach across 23 countries, The Flying Seagull Project is confronting the harsh reality of refugee camps through the simplicity of play. In 2007, while volunteering at an orphanage in Cambodia, founder, Ash Perrin, identified a lacuna in the care of the children living there. While the essentials: shelter, clothing etc. were being met, one critical element was overlooked, says Ash, “It was someone’s job to feed them, but it was no one’s job to care what they wanted to be when they were older or if they felt confident.” Ash saw this gap as an opportunity to create something new and special, where each child would be seen for their true potential.  He went home to recruit fellow entertainers, and four months later the first Seagull Project was in the works in Romania.  Since 2008, The Flying Seagull Project has brought laughter to more than 220,000 children with over 4,000 play sessions. 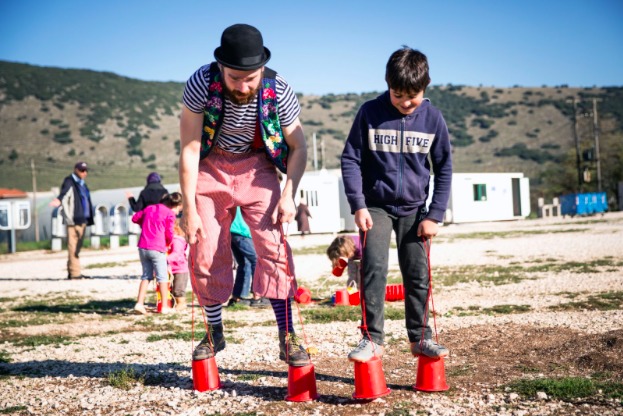 The focus of this social circus project is to transform the most challenging and desperate environments into safe spaces that foster happiness, laughter and the freedom for children to express themselves; spaces in which play time is not a luxury but an integral part of daily activity. Composed of clowns, musicians, entertainers and actors, The Flying Seagull Project team visits refugee camps worldwide with their big top tent, enriching communities with interactive clowning and magic workshops, participatory circus shows and play sessions. As a centerpiece of their mission, The Flying Seagull Project highlights the “power of play” and its critical role in child development, sense of security, and the healthy ecosystem of a community.  Ash points out that in crisis stricken communities, despite its agency in a prosperous environment, play is often the first thing to be neglected. After 14 years of Seagulls, Ash attests to the socially-medicinal character of play on both the community and the individual level.

“In Romania, we were working with some adults who had learning difficulties…they were quite young adults, mid to late teens. And we were doing a music session…we play with rhythm, we play games around voice and song, so it’s not a music learning session it’s a play session that allows music to be its conversation starter…We were going round the circle introducing ourselves…and at the end we were talking to the staff of the centre and they were amazed that one of the boys had said his name. And they explained to us that he had been visiting the centre for something like seven or eight years and hadn’t spoken to them…So, in the safety, in the sanctity and in the held space of a game, the young lad felt confident and encouraged enough to join in.”

Experiences in which play empowers, though distinctive, are not seldom but a “sea of many.” In a more recent project, Ash witnessed an equally eloquent example while working with child refugees at a camp in Greece.

“There was a young man who had been through an awful journey, he and his family…and it resulted in him becoming very withdrawn, very aggressive towards his mother…So we joined the camp and we set up a big top, and after two or three weeks…he’d gone from showing up and being very aggressive to us and to other children, or just simply not taking part, to being our number one attendee. Speaking to his mother afterwards, a person who’s with us was told he’s just completely changed: he goes to bed early so he’s got energy for the play session, he’s now got friends…he’s chatting away to his mother telling her everything that’s been going on… literally all that was after two weeks of play in our big top.”

The Flight of the Seagulls

Though the UK is home base, The Flying Seagull Project has created safe spaces for children at refugee camps, asylum shelters and transition centers across four continents. (A map of their outreach locations can be foundhere!) The project originally took root in Romania but was quick to spread to Europe during the refugee crisis.

“When the refugee situation appeared all over our televisions and all over the media it was really evident, as it always is, that at least 40% of the people affected were children.”

The Flying Seagull Project made ties with a charity called Humanitas, that provides hydrocephalus treatment and training in west Africa. Alongside the Humanitas medical staff, The Flying Seagulls provided clowning to patients.

“An amazing amount of research and evidence shows that having a clown or a play person or that sort of a playful character present, both during the examination and then pre- and post-op, can increase a child’s recovery speed” (Dionigi et al). One connection seemed to lead to the next, and Ash found that the work The Flying Seagull Project provided was in high demand. 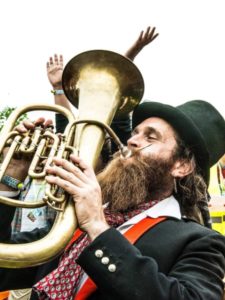 When integrating themselves into a new and vulnerable community, The Flying Seagull Project takes care to approach a new project in a respectful and gentle fashion. This often looks like a show, several shorter sessions with the children, evening cinemas and discos at which parents are welcomed and encouraged to join, and outreach to significant members of the community; doctors, priests, mayors, etc.

Securing a location can prove tricky at times. The Flying Seagulls must first make a case for support and work around visa bureaucracy. The COVID-19 Pandemic has further complicated such navigations.

“The COVID-19 pandemic has had a devastating impact on our projects, specifically the ones that were based in the camps in Samos, across Athens, in Lesbos…It was impossible to share games and sessions with the kids without putting them and their parents and their elderly relatives, who all share extremely substandard accommodation, in danger. So all of our international projects were immediately frozen…As well as that, we had to get our performers home. We had around 30 performers on the ground at the time, as well as a team of six of us who were in Norway.”

As every cloud has a silver lining, Ash and his team have learned to look at the lessons that came from a year of quarantine in spite of its difficulties. There is always room for adaptation and in the Seagull’s case, a need for it. The pandemic has forced many artists to be creative and The Flying Seagull Project is no exception. The pandemic required Ash and his team to make innovative alterations to their pre-quarantine routine including the introduction of digital packages for their supporters.

“In many schools we hosted an online theatre production which used participatory techniques from our live sessions to engage more than 6,000 people across the UK. We then launched our Laugh ’n’ Play UK projects, which are show-and-games tours across the UK, and we built a snowmobile, which is a specially adapted large van that now has a side stage and an escape hatch through the front cab. So we can arrive somewhere, climb through the back, lower the station, do a show, climb back through and leave without actually ever getting out of the van, which allows social-distancing.”

Anything to continue the laughter and play!

Lessons for the Clown, Wisdom for the World

The Flying Seagulls outreach is not limited to international work. While confined to work within UK borders this past year, Ash became aware of “the unfortunate and sad truth that so many areas of the UK are in dire straits: from food poverty to alienation, and ostracized communities pushed out by way of their ethnicity or their refugee status. So we’ve realized that there’s also a huge amount of work that we can be doing while we are in the UK.” In recognition of this need, the Seagulls now provide UK activities on a full-time basis.

Similar to the play sessions abroad, at the core of these events, the Seagulls hope to give children confidence, and create an environment in which kids feel safe enough to be their full selves. 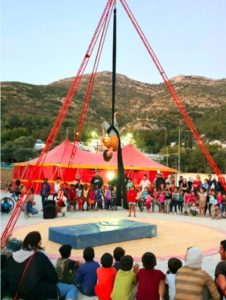 In reflecting on his time with The Flying Seagull Project and the lessons he has learned these past 14 years, Ash gets at the root of the magic and distinctive quality of circus, “What I’ve learned is everything comes down to energy…If you do the thing you love, with love, for people who you think might love it and you share it with them in a loving way, you are going to create change. And this is how the world can change, this is how people who have been pushed out, marginalized, forgotten or purposely removed, this is how they can feel part of things: it’s passion, it’s love, it’s energy.”

Ash encourages interested readers to get in touch with The Flying Seagulls. “Whatever you’ve got to offer, if you’re willing to offer it with love and energy we’ll always have a space for it on one of our teams, one day, somewhere!” His parting words of advice for readers is to find a laughter partner, someone in their community who would find enjoyment and happiness from the talents you have to share and the things you love to do. “If you’ve got something to offer, there’s someone who needs it. So go and find them, don’t wait for them to come to you. Be the change, be the catalyst, be the circus!” Social Media Intern -United States
Kristen is a two time graduate of FSU having completed her Master’s in Spanish Linguistics and Literature. While a student, she performed as part of the FSU Flying High Circus, with disciplines in Spanish Web, Triple Trapeze, Flying Trapeze and Bike for Five. She now resides in Massachusetts and is happy to keep her involvement in the circus arts alive as the Social Media Intern for CircusTalk.
Kristen's profile
You are about to enter a members-only zone.
To share this article on your CircusTalk member page and connect with circus professionals from all over the world, sign up now. It's free!
Sign Up
Already have an account?
Log in

Kristen is a two time graduate of FSU having completed her Master’s in Spanish Linguistics and Literature. While a student, she performed as part of the FSU Flying High Circus, with disciplines in Spanish Web, Triple Trapeze, Flying Trapeze and Bike for Five. She now resides in Massachusetts and is happy to keep her involvement in the circus arts alive as the Social Media Intern for CircusTalk.