Therapeutic Clowning Course Trains the Next Generation of Healthcare Clowns 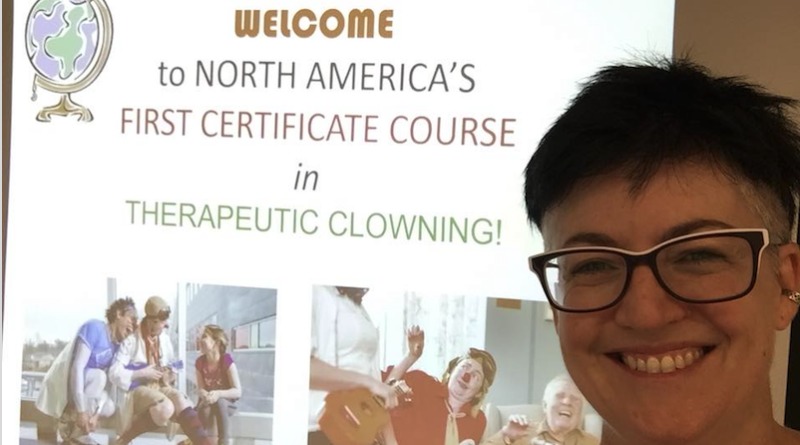 American comedian and entertainer Milton Berle said that laughter is the best medicine in the world. For years, the clown’s main task has been to make people laugh. Therapeutic clowning is the merging of these two realms, laughter and healthcare, in order to bring some “lightness and joy in a place where sadness, trauma, and boredom often reside” according to Helen Donnelly.

Donnelly has been a professional healthcare clown, or therapeutic clown, for the past 15 years. In this time she has worked tirelessly in the field. She has clowned for various reputable healthcare facilities, created and instructed the first therapeutic clowning certificate course in North America, and founded The Red Nose Remedy, an organization dedicated to continuing education and finding employment for therapeutic clowns in Ontario, Canada.

From the Stage Floor to the Hospital Floor

Prior to all of this, Donnelly was working as a successful theatrical and circus clown when she was approached by a friend to audition to be a therapeutic healthcare clown. “It had never occurred to me that you could do clowning in a hospital setting,” she says. “I thought that just sounds like something that would be too hard on the heart and I can’t imagine ever doing that and no thank you.”

Every once in awhile a position would open up at The Hospital for Sick Children, an internationally renowned children’s hospital in Toronto, Canada, and her friend would reach out again. “The third time she invited me I found myself saying yes to the opportunity,” Donnelly recalls.  “When I arrived at my audition for Sick Kids I was like ‘Ahhhh… This is feeling really good. This makes sense. It’s a good fit for me.’ It’s something I feel that I am now called to do.”

In the world of healthcare, Donnelly’s clown persona is that of Dr. Flap. “As Dr. Flap I’m a bumbling, haughty clown doctor who is often wrong but decides to never be wrong. Dr. Flap is an easy leader that talks a lot, but talks a lot about nothing and just loves to hear the sound of their own voice,” says Helen of her alter ego.

After working with the Hospital for Sick Children for two years, Donnelly left to take another contract with Cirque du Soleil. Upon her return, she auditioned for another local children’s hospital, Holland Bloorview Children’s Rehabilitation Hospital. She has been there for 12 years. While working at Holland Bloorview Helen met Jamie Burnett and the two became friends and clowning partners. The two would often talk about the need for proper, professional therapeutic clown training that would keep both the clowns and vulnerable patients safe. Sadly, Burnett was diagnosed with a brain tumor in 2008 and passed away in 2011, but his idea and the dream that he and Donnelly had envisioned did not die with him. Before his death, she would visit him with her laptop and they would talk for hours about what a therapeutic clowning education program would look like. She recorded those conversations and used them to lay the foundation of what would eventually become the world’s second therapeutic healthcare clowning certificate program and a first for North America.

“[Jamie] was a visionary. He and I would go back and forth. He was the vision and I was the Clydesdale. It’s been about 8 years since his death and I just kept chipping away at it. I began by reaching out to clowns in healthcare in Scotland, Quebec, France, and the U.S. to share my content and ideas with them and ask them what they thought,” says Donnelly of the first steps she took after Burnett’s death. After extensive consultation with her international mentors, she realized that she was onto something.

The next step she took was to approach the Teaching and Learning Institute at Holland Bloorview Children’s Rehabilitation Hospital with her idea. She approached Dr. Kathryn Parker, Senior Director of Academic Affairs and Simulation Lead, with her ideas. After discussion, the two decided that approaching a college would be ideal and Toronto’s George Brown College of Continuing Education was brought on board. Once the college was secured things came together quickly. It was decided that the program would run once every three years. It would consist of a year of part-time studies, including nine hours of in-class time with instruction in health and safety protocols and different conditions they may encounter. In addition to clowning, students were also exposed to music, movement, and reflective practice taught by co-facilitators and guest instructors.

Students would complete two practical placements. They would be shadowed by Donnelly and co-facilitator Phil Koole, receiving on-the-spot feedback and support from their instructors. Securing two sites that would work with student healthcare clowns was one of the more difficult tasks facing Donnelly. She was able to secure Safehaven Project for Community Living, which is a respite centre in Toronto for children with disabilities, as a pediatric placement, but finding a geriatric placement was more difficult. “It was quite an endeavor and journey to educate and to encourage Sunnybrook Veterans Centre to have us on.” However, she was able to show hospital leadership video evidence from around the world to demonstrate how therapeutic clowning benefits the elderly in many ways.

With a program in place, the process of selecting students came next. Applicants went through a three-step selection process that included a written application, an interview, and an audition. The “yummy candidates” for the program needed to have theatrical or circus clowning experience already she says, in addition to a discipline outside of clowning, such as dance, music, theatre or circus artists.

A New Generation of Therapeutic Clowns Go to Work

Of the 10 students admitted, eight students completed the program. Angola Murdoch was one of them. As a child, Murdoch spent time at The Hospital for Sick Children where she met her first therapeutic clown, Bunky (Joan Barrington). She credits her interactions with Bunky as playing a significant role in her own recovery from scoliosis surgery, a procedure that left her having to relearn how to walk. “The clown was like ‘I’m like you. You know what, I’m even under you. You’re like the star here at the hospital.’” Through play, Bunky provided Murdoch with some decision-making power again at a time when she felt powerless. These encounters inspired her own to journey to eventually become a therapeutic clown.

No stranger to performing, Murdoch says that she has found her work as a therapeutic clown some of the most challenging of her career. “I am twenty years into my professional circus career and I have performed for 10,000 people a night, but I’ve never been so nervous as I was going into these places and doing this job.” She credits Donnelly’s pedagogical approach as helping to alleviate some of her initial uncertainty. Donnelly developed several common scenarios that a therapeutic clown would be likely to encounter in the field in order to better prepare students for working with actual patient-clients. Additionally, students were taught and practiced hospital hygiene protocols that were necessary to follow in order to keep both themselves and the clients safe from communicable diseases.

Maintaining these protocols while staying true to her clown persona was one of the bigger challenges for Natalie Fullerton, another graduate of the program. “Be in the moment, be vulnerable, be sincere, listen to the client, and I’m still remembering to wash my hands a certain way, remembering what I can and cannot touch, and the order of doing things.” She says it was daunting because of the responsibility placed on them. This feeling is echoed by Murdoch as well because, as she notes, “therapeutic clowning is clowning with rules.”

Even with these additional responsibilities, both fledgling therapeutic clowns believe that the experience of working with their clients has far surpassed their expectations. “It was so much more than what I imagined. You go into this thinking that you’re giving something to them, but I feel like I got way more than I gave,” says Fullerton. Murdoch simply says: “‘It’s absolutely magical!”

Six months after graduation, Fullerton and Murdoch have begun their careers as professional therapeutic clowns. Working with elders with dementia and Alzheimer’s Disease is the fastest growing area of therapeutic clowning and this past summer they brought their clowns, Rose and Mabel, to work with residents at a long term care facility in a rural Ontario community where Murdoch resides. After their visit residents couldn’t stop talking about them, so the facility has earmarked funding to invite them back. Along with the other six graduates of the program, they have also joined Donnelly’s not-for-profit organization, Red Nose Remedy.

Growing Red Nose Remedy continues to be a priority for Donnelly, however, she is now fighting her own battle with Multiple Myeloma, a type of bone marrow cancer. After being diagnosed in June 2019, just one month after her first cohort graduated, she could no longer go into the units to clown herself. Like a true clown, she finds the foolishness even in her own illness. “I want to write a song called ‘Cancer is Boring’ and I have another song that I’m working on called “I’m Having So Much Fun With My Cancer’” she says.

She feels as though her illness will also make her a better therapeutic clown. “Being life threatened does something to you and I know for sure that it’s going to change me for the better as a therapeutic clown,” she says. “I know I am going to be a better listener and give people space and time to respond.” She hopes to return to therapeutic clowning work in April 2020 after she completes treatments. Until then, her past clients continue to inspire her own recovery. “I don’t know if grace is the word I’m looking for, but they get on with it and they are still kids and teenagers even though they are faced with all of this stuff and I really want to use them as a template when I am looking down the hallway of what I still have to go through,” she says. Writer, Performer -Canada
Jackie Houghton is a recreational circus performer, elementary school teacher, and freelance writer. When she is not teaching visual arts to school children, Jackie dreams about running away with the circus, but until then she is happy to write about it. She has been the exclusive writer for Femmes du Feu's Circus Sessions residency program for the past two years, and has also written for Circus Talk and American Circus Educators magazine.
You are about to enter a members-only zone.
To share this article on your CircusTalk member page and connect with circus professionals from all over the world, sign up now. It's free!
Sign Up
Already have an account?
Log in

Jackie Houghton is a recreational circus performer, elementary school teacher, and freelance writer. When she is not teaching visual arts to school children, Jackie dreams about running away with the circus, but until then she is happy to write about it. She has been the exclusive writer for Femmes du Feu's Circus Sessions residency program for the past two years, and has also written for Circus Talk and American Circus Educators magazine.

Dancers with Circus Skills for the Creation Inschrift