Tightrope Walking and Zen: a Way to Be Trained to Balance 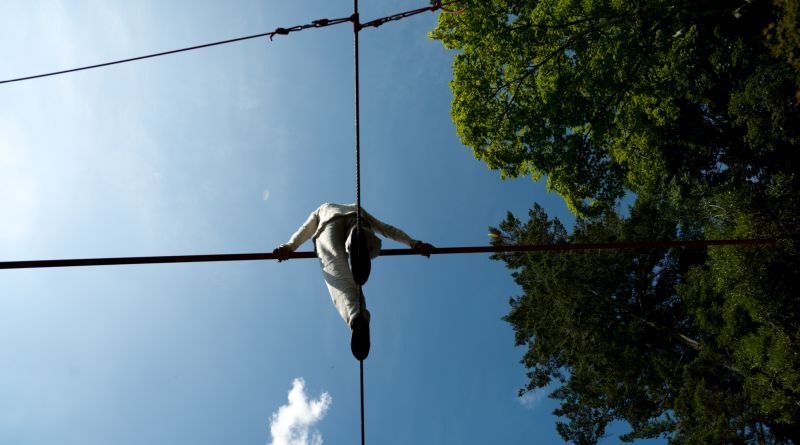 I had the opportunity to meet the philosopher-funambulist Andrea Loreni in person in May of 2016, during a TedX Conference held at Bocconi University in Milan. I was surprised and enticed by his speech that invited me to consider the relationship that exists between the art of tightrope walking and the practice of Zen meditation. What do these two disciplines have in common? How useful could this union be for the circus artist’s training, and from a broader perspective, how helpful might it be for a human being’s development? These questions were the starting point for a fruitful exchange of ideas that eventually brought me to choose Andrea Loreni — the only Italian tightrope walker who specializes in great height walks on steel tightrope– as the main subject of my PhD dissertation[1][2]. My research started a year before, originating from ten years of experience as a teacher of circus arts,  which led me to investigate the relationship between education and the artistic discipline of tightrope walking. Furthermore, this study led me personally to analyze the idea of balance as psychophysical positioning, self-centering and opening to the possibility of living in the here and now of the present moment, following its variations: on the tightrope, on the stage, and in life.

“Who taught me to walk on the tightrope? The tightrope itself.” The philosopher took his shoes off, and barefoot, started to tell me about his idea of becoming a tightrope walker, which began as an alternative to the life he didn’t want to have.

“If I have to identify a crucial event for my choice of this artistic profession, I think about my childhood when I could not understand why my mother, everyday, had to go to work. ‘But do you really have to go everyday?’ I asked her… After a long time, this thought brought me to look for another path. Now I can say that my tightropes are my ways–different points of view of the world–different ways to live, and to walk. There are many different ways even when we think there are not. I think that my practice of tightrope walking corresponds to my need to look for something different, at not being pleased by the idea of an inescapable reality and path given as the only possible path. As time went on, I understood that art represents the possibility to feel the universal. Art is the place where I can speak to each individual while I am speaking to all. And on the tightrope there are some moments of perfect balance, moments when the infinite bursts silently”.

Andrea looks at me with his blue eyes and invites me to stay in the present moment of our encounter.“We are authentic if we are totally in what we are doing, here and now. It takes training to stand in the moment because being present is a hard and demanding exercise”.

Andrea’s present has its roots in his degree in theoretical philosophy at the University of Turin  (1999) and in his enduring passion for street arts dating back to 1997. Back then, Andrea attended FLIC School of Circus in Turin and Circus Space (now the National Center for Circus Arts) in London, specializing in tightrope walking. Later, he took two intensive seminars of clowning that he considers crucial to his education. In fact, during the seminar led by the clown Jean Meningue, Andrea felt he deepened his work on the authenticity of being, an idea that was fundamental for his training and transformation, as a performer as a well as human being.

Later, Andrea self-taught himself the great heights walks, getting on a hemp tightrope between two trees in his garden. Since then, he never stopped crossing the skies, reaching several Italian records, among them the longest walk, 250 meters long at 90 meters high, between the Penna and Billi Hills near Turin in 2011, and the most sloping walk with a 26 degrees inclination, from 0 to 30 meters, arriving at the bell tower in Piazza della Vittoria in Lodi in 2011.

“Today what I teach is not a technique to stand on the tightrope. I teach my way to face fear, a new situation, an obstacle, all of these aspects that are well represented by the tightrope” A balance practice like this goes beyond the acquired technique in order to involve the body-mind whole in a self-transformation process which could be considered a denudation, an analysis, a rooting, or exceeding of our own limits in order to become tightrope-empty. Such a process of individuation and personal growth is comparable to what several theatre academics of the XX Century[3] have defined as training, meaning the “architecture in movement”, or Way, an instrument to re-form the human being through the search of a whole self awareness. In this practice, the tightrope becomes an example of firmness through mobility. Balance in movement.

This personal training is something Andrea developed thanks to his encounter between the artistic discipline of funambulism and the eastern practice of Zen meditation. This encounter took place eleven years ago when Andrea started walking in the sky and sitting in meditation. During the long hours sitting in this position at the Sogen-ji temple of Okayama, in Japan, the tightrope walker continuously asked himself “Why suffering, leg pain, cold, sleepiness? Why must the pain and the fatigue be part of the practice?” In a similar way on the tightrope he asked himself “Why the risking?… Because I succeed in understanding that pain and fear only lie in my mind”. “This is the point”, he goes on, “it is a process to calm your mental fears. Also, on the tightrope I am scared. Fear is a strong, important feeling which is with me in any crossing.” In that moment, the only thing to do is “stop thinking”, leaving your thoughts behind to be present in the here and now of the experience. “The commitment should be for the present.” This is Andrea’s teaching, not just for performers but for all human beings.

Andrea came back to the Sogen-ji temple twice more, all the while increasing his awareness of tightrope walking and Zen being two dimensions of a single Way. The encounter between tightrope walking and meditation took place, symbolically and materially, during a crossing held in August 2017, for the Roshi Shoda Harada’s birthday. “It was the first tightrope walk ever inside the temple”,  Andrea says it was a fluid, silent walk, “the most silent I have ever performed”, with the participation of all the monastic community together with some outer visitors.

This tightrope walk suggests that it is possible for us to widen our horizons and to open us up to experiencing eastern traditions. These traditions help us strengthen our practice of awareness and presence, in order to authentically live in the present moment. In our daily life the dissociation of the mind from the body, and of the awareness from the experience, seem to be the result of a habit,  but habits can be broken, as the funambulist teaches us. Above all, we can do it by re-organizing our usual way to walk, learning to walk ex novo, as the tightrope walker teaches us, in order to experiment with changes in our ordinary balance. Although tightrope walking is unnecessary and very strenuous, at hundreds of meters from the ground a simple movement like walking becomes extremely complex and requires rigor, attention, determination and courage. It’s a way of walking that demands a new awareness of verticality: where one side is the Earth energy that attracts and connects us to the core and on the opposite side the push is towards the sky. These two forces are symbolic of the tension of body and mind which characterizes human beings.

Towards a New Balance

By considering pedagogy as a science dedicated to transformation and education as an instrument of deep and complete self-understanding for human beings, with this research I try to look at Andrea Loreni’s way as a possible Way of psychophysical focusing and balancing, helpful for the performer’s training and for the educator’s as well, because the educator is expected to take his position every day on the performative-educative stage with his whole body-mind identity. PhD Student, Teaching Assistant -Italy
Giulia Schiavone is a PhD Student at the Department of Human Sciences for Education "Riccardo Massa" at Milano-Bicocca University and a teaching assistant at Play and Education and Embodied Education. Her research highlights the prolific relation between performing arts, transforming experiences and human growth in order to design and carry out educational paths.
You are about to enter a members-only zone.
To share this article on your CircusTalk member page and connect with circus professionals from all over the world, sign up now. It's free!
Sign Up
Already have an account?
Log in

Giulia Schiavone is a PhD Student at the Department of Human Sciences for Education "Riccardo Massa" at Milano-Bicocca University and a teaching assistant at Play and Education and Embodied Education. Her research highlights the prolific relation between performing arts, transforming experiences and human growth in order to design and carry out educational paths.