What We Need: This Round table on Circus, Culture & Diversity in Montréal 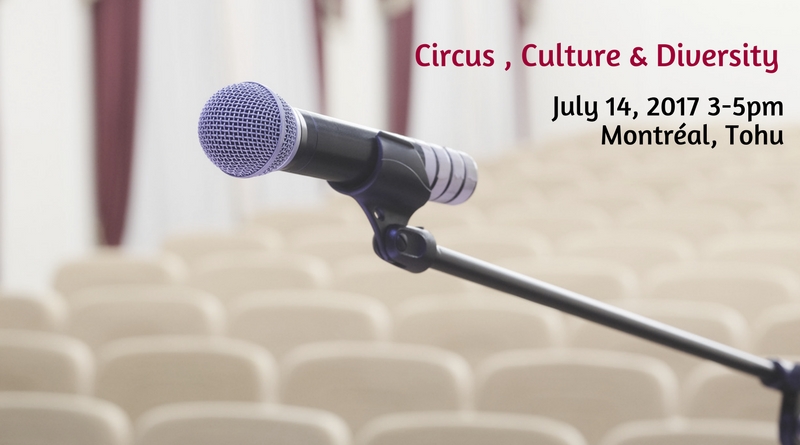 As circus artists, presenters and fans gather in Montréal for the Montréal Complètement Cirque festival that runs July 6 thru the 16th, there will be plenty of opportunities for circus professionals to explore their trade. There is a professional conference called the International Market of Contemporary Circus that runs alongside the public programming and in recent years, more and more independent activities and conferences have been cropping up to meet the diverse needs of the circus community. This year, organizers  Nicki Miller and Léda Davies have put together an auxiliary event during the week of circus festivities. They proposed a round table group discussion among facilitators and entities in the circus industry on the very topic of diversity. If you can attend, visit here to register for the workshop. If you are not in town, follow Circus Talk on Twitter as staff will be on hand to live tweet the event.

In society and in art, diversity is a catalyst for communication, connection and creativity.

The circus sector is in constant evolution. As the presence and popularity of circus in North America grows, so does our responsibility to create and sustain an inclusive industry.

To have a global conversation identifying the scope of diverse individuals and artistic approaches that comprise the circus genre.

To discuss the respective responsibilities of leaders in the circus field ​in relationship to each other  (educators, directors, programmers, academics) regarding the promotion and progress of diversity, representation and accessibility in our field.

To determine ways that all members of the industry can talk about and support a viable and diverse field.

To identify actions each member of the circus community can take to further promote diversity of voices and aesthetics in the circus genre.

Through the format of a round table discussion, we will explore how contemporary circus can be developed to better address the issue of equality.  What proactive steps can we take to support diversity both in casting/representation (e.g. varieties of gender, race, and cultural perspectives) and in artistic aesthetic (theatrical tools, circus disciplines)?

The round table will feature a panel of professionals who have worked in a variety of positions in circus and performing arts, and an introduction by Alisan Funk on her research on gender in circus.The panelists will than facilitate a group discussion among attendees by citing the ways in which they have engaged with diversity and accessibility in their respective roles as circus leaders.

Circus artists, producers, programmers, educators, funders, supporters, audience and fans are all invited to join us for this important discussion about circus’ expansive future!

About the Organizers and Panelists

Léda Davies is a multidisciplinary artists based out of Montreal, QC. Since completing her BFA in Drama (minor in dance) at the University of Calgary in 2008, and Leda has performed worldwide with some of Canada’s leading theatrical companies. In 2013 Léda moved to Montreal where she trained full-time with Canada’s leading circus artists and coaches. Whether on stage at the National Arts Centre, in a freight elevator for a site-specific performance, or off of a 5-story building Léda tenaciously blends physicality and story telling in everything she does.

Los Angeles native, Dana Dugan is an artist, acrobat, performer, pedagogue, academic, and mother based in Montreal. She was a founding member, programmer, and producer for the Chicago Contemporary Circus Festival. She is currently pursuing a Master’s Degree at Concordia University under scholarship researching the circus body.

Alisan Funk is a Montreal circus coach, performer, creator and director currently pursuing her PhD in Education at McGill University. She has an MA from Concordia studying circus education and she works on multiple research projects with Concordia and the National Circus School examining technical, pedagogical and creative aspects of circus.

Thomas Lenglart has been manager of casting for Cirque Éloize since April 2013.  After arriving in Canada 10 years ago, Thomas began working as an assistant director and director for the traditional circus “Le Fabuleux Cirque Estival”.  Since then he has gone on to work as an assistant to the artistic director for Cirque Éloize and casting coordinator, and production manager for Cirque du Soleil.  Thomas studied Cultural Business Management, and has a master’s in international commerce. He also has over 10 years of professional training in piano and percussion from the “Convervatoir de musique d’Arras” in France and has worked as a producer and programmer in the music industry before moving to Canada.

Nicki Miller is a Brooklyn based director and performer known for her theatrical take on aerial arts.  Her work as aerial designer and choreographer was seen recently in Ripe Time’s The World is Round at the Brooklyn Academy of Music (BAM) directed by Rachel Dickstein.  She is a graduate of Syracuse University’s College of Visual and Performing Arts. Notable performance credits include the 2014 Contemporary Circus Arts Festival of Toronto (aerial performer), Only Child Aerial Theatre’s ASYLUM (co-author, director and performer) at NYU’s Skirball Center for Performing Arts in the 2017 Circus Now Festival. Recently Nicki was a resident artist of the 2016 Santa Barbara Floor to Air Festival and the 2016 Circus Sessions at Toronto’s Harbourfront Centre.  In the Summer of 2017 she will be assisting Ellie Dubois’s on her production of No Show at the Edinburgh Fringe Festival and also assisting Cirkus Cirkör director Olle Strandberg on the upcoming premiere of Under  in Sweden.

Joseph Pinzon is the founder and creative producer of Short Round Productions, a Los Angeles-based circus company responsible for the show Filament. With over 20 years of performing experience, Joseph holds a BA in Psychology from UCLA and is a graduate of the National Circus School in Montreal, where he specialized in aerial techniques. He has worked internationally with companies such as Cirque Éloize, Compagnia Finzi Pasca, Cirque du Soleil, Les 7 Doigts de la Main, Chämaleon Productions, and GOP.

Guillaume Ittukssarjuat Saladinis the co-founder, co-artistic director, trainer and cast member of Artcirq. He is from an anthropologists family, grew up partly in Igloolik until he was 15. After graduating from UQAM in 1998 in Sociology and Communication, he helped starting Artcirq while being at the National Circus School of Montreal. In 2001, he was part of the cast of Cirque Éloize’s show Nomade, directed by the world known Daniele Finzi Pasca for a 4-years-worldtour as an actor and acrobat. He now lives in Igloolik on a permanent base to carry on the training and to work on several cultural and artistic projects.

Susie Williams is the managing director of Acrobatic Conundrum. She is a graduate of Northwestern University’s theater program, a former Fellow in the BAM (Brooklyn Academy of Music) Professional Development Program, and a retired flying trapeze artist.

Wake Up Call for Inclusion 02 – The Change

June 23, 2020 Johnathan L. IversonComments Off on Wake Up Call for Inclusion 02 – The Change

Dr. Tobie Stein’s book Racial and Ethnic Diversity in the Performing Arts Workforce starts with a striking statistics: ”In 1996…

June 22, 2020 Sierra Rhoades NichollsComments Off on Meet the Graduate from SKH – Stockholm University Of The Arts Department Of Circus – Elaine Briant
Opinion Spotlight

On Racism and Representation

June 18, 2020 Majo CazaresComments Off on On Racism and Representation
Panels and Discussions Spotlight

June 12, 2020 Johnathan L. IversonComments Off on Wake Up Call for Inclusion 01 – Institutional Barriers and Individual Biases in the Performing Arts