Why Do Circus Artists Make Music? 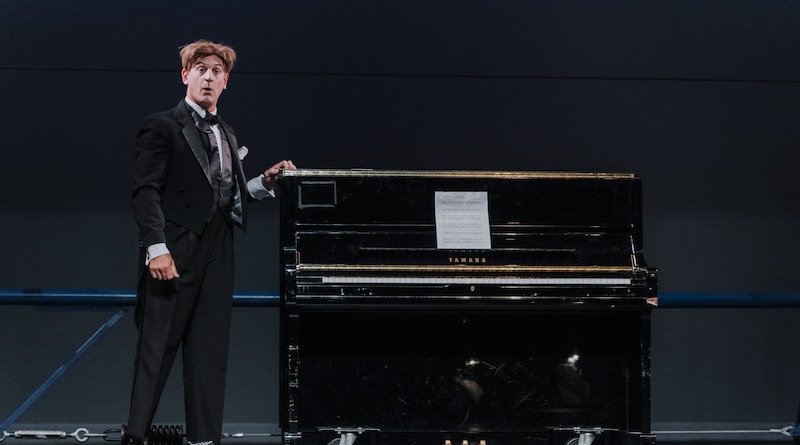 Lately, it seems like more and more circus artists are getting into making music. As a circus artist who makes music, maybe I’m more attuned to this phenomenon than most. I wanted to know more about the people in this category and how their music and circus work fits together. Circus, after all, is such an all-consuming lifestyle, with training, creating, performing, and touring; it always fascinates me to hear how an artist fits in another discipline alongside it. I spoke to several artists about their music practice, how it’s informed by their circus work, the ways in which the two forms interact, and how they see their futures in both fields.

Quickly, a pattern emerged. Many of the artists I spoke to have graduated from circus school within the last few years and are enjoying stable employment. Within their circus disciplines, they’re no longer pursuing high-level technique at the same pace they once did, leaving a space available–a space to once again learn something new, from the beginning.

Tony Pezzo is a juggler from Arnold, Missouri, currently performing with  Absinthein Las Vegas. “I used to be super competitive with juggling,” he says. “I slowed down on that a little bit and focused more on performing juggling. That opened the door to try to get good at something else.” While he was living in Stockholm, where he went to DOCH, Pezzo began experimenting with writing and recording lyrics.

After a lifetime of pursuing circus, the desire for a new kind of challenge can be strong–and in many ways, a relief. “For a long time I was looking for a way to express myself that wasn’t so physically exhausting,” says Nate Armour, a juggler from St. Paul, Minnesota. Owen Winship, a porter from Victor, Idaho, agrees. “You can only do so much [circus] in a day. But you might not have worn out your creative impulse. And if you’ve just been drilling things, you may need a creative outlet.”

“I enjoyed the challenge of something new,” says Pezzo, who now releases rap music under his own name. “There was no pressure at all. No one has any expectations. If I make a new juggling video, people have expectations…if I put out an album tomorrow, no one has any idea what it’s going to be like,” he says.

The lifestyle of working on a show seems to be conducive to making music. “If you’re working as a professional you have tons of weird time alone,” says Armour, who has toured with Circus Knie and Machine de Cirque. Cooper Smith is a porter and Cyr wheel artist from Minneapolis, Minnesota. He makes ambient/noise music and is currently preparing his first album for release. He’s also touring with the Cirque Éloize show  Hotel. Says Smith, “I have a show call, I go do a show, I come back, I can work on music. For me it’s a perfect set-up.”

But how does the fascination with making music begin? Not surprisingly, everyone I spoke to had an abiding love of music from childhood, and many had a deeper family connection to the craft itself. Kellin Quinn Hentoff-Killian, a juggler from St. Louis, Missouri, is the grandson of the lateVillage Voice  music critic Nat Hentoff, who turned Hentoff-Killian onto jazz. Pezzo performed in musicals with his brother and sister as a child. And Smith’s father is a composer. “I’m really lucky on that front,” says Smith. “Both my parents are artists. For me, growing up in that family, it was always natural to pursue your artistic vision.”

Winship had an especially immersive, musical childhood–his father, Ben Winship, runs a recording studio out of his family’s backyard. “My dad would have friends over playing music…He’d let me come out and listen while the people were recording…Eventually, if he needed someone to hit record or something, I would help him.” It was there that Winship recorded his debut, a folk album entitled  Vol. 1, in 2017.

So how does a background in circus inform an artist’s music work? Everyone agreed that the persistence they learned from circus taught them to be patient as they began their music journey. Says Hentoff-Killian, “You can’t learn a trick unless you drop it a hundred times. The first beat I made, I thought, this is definitely okay, but I know I’ll be better next year. I’m pretty confident that it doesn’t really matter where I’m at right now.” Armour, who compares learning the juggling notation Siteswap to learning music production, agrees. “You have to take some time, realize this is somewhere you haven’t been before, trust that it’s slow.”

Benjamin Domask, a juggler, mime, and composer from the Twin Cities, believes there is an inherent connection between circus work and music. “I think Jay Gilligan said once juggling was like music visualized. The rhythms, the way you combine throws, it’s so intertwined with music. To understand one is to understand the other, and I think jugglers are catching onto that. Because of this idea of just learning rhythm…it’s all rhythm based. I think so many jugglers are jumping into music is [because] they find it so accessible.”

Jay Gilligan, a juggler who teaches master courses on the relationship between juggling and rhythm, thinks that, for circus artists, there is a natural inclination to expand into other fields. “Music is a great alternate expression for people who are already expressing themselves physically…it helps that if they can make music, they can easily relate it to their other forms of performing.” There’s also the question of the cultural reach of music versus circus. Says Gilligan, “We’re in the age of music, as a society. Music is our highest aspiration…before music, society was in the age of architecture. Now we have the hierarchy of all the arts with music solidly on top.”

Giselle Gabrielle, an aerialist and synthesist from Olympia, Washington says that music technology has made it easy for circus artists to begin exploring. Even access to simple production software can change a person’s life. “I love when a new tool opens a whole world to someone,” she says. “We have such crazy access to music tools right now.” Currently, she’s working on incorporating more movement into her live music performances. “I love performing. That’s something circus gave me.”

Each artist sees a different balance of music and circus in their future. There are financial considerations, health and aging concerns–and then there’s the fear that music will lose its value as a respite from circus if pursued too completely. “The kind of relaxation I have with music…I strive to have it with juggling, but that rarely happens,” says Hentoff-Killian. “With music it’s easier to obtain…I wanna keep music as a fun thing.” Still, he says, “I could see making a show where I own all the rights to all the music in my show.” Smith is of a similar mind. “My fear is when you commit to something as a career it has all that pressure on it. Music is a hobby and a pleasure for me. I’m excited to release some of my work into the world and see the results.”

You can’t learn a trick unless you drop it a hundred times. The first beat I made, I thought, this is definitely okay, but I know I’ll be better next year.

“I’m definitely not going to be a touring circus artist when I’m 50,” says Winship. “But music will always be there.” Winship is thinking ahead to his next album, which he plans to begin working on when his contract with the Cirque Eloize showSaloonis finished.

To Armour, all of his artistic pursuits are related. “I don’t think I ever want to leave the stage behind. It’s all pointing in the same direction.” For Armour’s next contract, a show calledCampingby Théâtre à Tempo, he’ll get to play instruments on stage. “Whatever we can play, we will. It’s a huge opportunity to play guitar, sing, play percussion, maybe saxophone…”

The innate desire to create, the space and time afforded by a professional circus life, and the increasing ease of home and mobile recording has created a fertile opportunity for artists to express themselves in a way that can augment and expand their circus work. Says Smith, “So many people I know are using Garageband to splice their songs together, or they’re creating soundscapes that they want to hear with their act, because they’ve gone from thinking, ‘Oh, if only I had this exact thing I’m imagining’, to, ‘I could make that exist.’”

Book Kennison is a circus artist and music producer based in Chicago. His debut album with the band Logan & Book can be found on Spotify; other sonic experiments can be found on Soundcloud. Circus Artist -United States
Book Kennison is a circus artist based in Chicago. His main discipline is juggling; his other pursuits include writing, music composition, and photography.
Book's profile
You are about to enter a members-only zone.
To share this article on your CircusTalk member page and connect with circus professionals from all over the world, sign up now. It's free!
Sign Up
Already have an account?
Log in