With A Net: Insurance for the Circus Arts 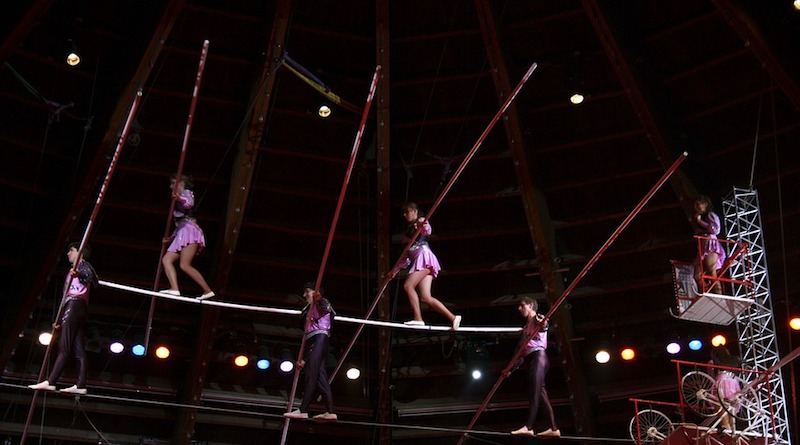 Insurance for circus performers feels like a no-brainer (or maybe a “save-your-brainer”) to protect your life and livelihood. But it might seem scary, because there are so many options to chose from. How do you know what type of insurance you need if you are an artist, a festival, a touring company or presenting organization? For example, in the USA when you rent a performance venue, workman’s comp is required in every state, but what about individual or small group coverage? How do insurance needs differ in various countries?

AIP is the largest insurer for dance and ballet, touring Broadway shows and individual artists, as well as associations such as Dance USA, Theater Communications Group, Performance Arts Professionals and Fractured Atlas. AIP works with 2,500 clients domestically and internationally, and last year they insured touring productions in Europe, Asia and Africa.

Middleton says every performer and group should at least have a general liability policy, which protects against negligence causing bodily injury or property damage. Premiums for this might cost more for companies with more ticket revenue.

International performers touring the US might also need healthcare coverage during their tenure. Coverage costs and contract requirements can vary wildly in domestic US and international policies. US premiums are usually higher due to America’s penchant to sue and the expense of its healthcare system. For international coverage, the insured and their agents should be mindful of currency differences and liability coverage limits.

Middleton said that San Francisco’s Blue Man Group was sued for $10 million because an audience member claimed to be hit by one of the stage balls, and was then unable to, uh, perform after that, because of the trauma.Sexual dysfunction claims aside, audience interaction does figure into coverage costs, as do other activities.

Solo performers should expect to pay around $500 a year for general liability policies.Circus acts with more dangerous activities can pay up to $1000 a year, based on payroll receipts. Productions with children can also increase costs, since they require tutoring and can only work limited hours. Animals, such as dogs, goats and llamas in Middleton’s experience, might not increase premiums but the insurance companies definitely want to know if they’re part of your act.

The Phantom of the Opera’schandelier is a huge risk exposure because it swings out over the audience, as do actors inSpider-man: Turn Off the Dark. Any activity taking place over a group of people will increase costs and decrease insurer options.

Some insurance companies prefer aerialists who don’t go above 7-10 feet. They consider what controls you have in place such a lines and a net. Insurers also look at controls for fire acts and shows likeThe Wizard of Oz, what chemicals are used to generate the flames, to make sure the sets are treated with fire retardant and that medical equipment is readily available.

Since trampolines propel the human head at a high rate of speed, coverage is expensive and rare. The higher risk acts on trampolines, in the air and with fire should expect to pay $2000 a year or more.

Middleton reports that big companies like Blue Man have an active risk management program, and can pay up to $20,000 per year.

You might have seen policies that say “Inland Marine” and wondered how that coverage might pertain to you.  Performing Entertainers and Event Professionals Insurance (PEEP)explains that Inland Marine insurance covers the equipment and gear that moves (although if you rent or lend your equipment to others, any claims won’t be covered)

Specialty Insurance Agency offers insurance to jugglers, aerialists, fire dancers, and Santa Claus-es, but cautions that its coverage is for the performer alone, not others working with you.

Middleton stresses, whichever policy or carrier you choose, be forthcoming about all elements of your act and equipment, as well as sharing any detailed travel plans. Ask good questions to secure your insurance safety net. Writer, Actor, Educator -United States
Karin McKie is a writer, SAG-AFTRA actor, educator, publicist and activist. She teaches students and professionals about storytelling, public relations, theater and stage combat, critical reading and comparative literature. Raised in the DC area and currently in Chicago, Karin has studied in London and the Bay Area, spent the millennium in Buenos Aires, performed in Amsterdam, Scotland, and around the Americas, and was a China/Taiwan scholar. She has a BS in Theater and Communications, an MFA in Creative Writing, and is a yogini, cyclist, weight lifter, and sometimes barefoot tennis player.
You are about to enter a members-only zone.
To share this article on your CircusTalk member page and connect with circus professionals from all over the world, sign up now. It's free!
Sign Up
Already have an account?
Log in