A new show three years in the works, Cirque du Soleil’s ECHO will give a fresh visual flair to innovative stagecraft and Big Top staples to tell a world-changing story. Learn more about the show’s creation– and when and where to see the premiere. 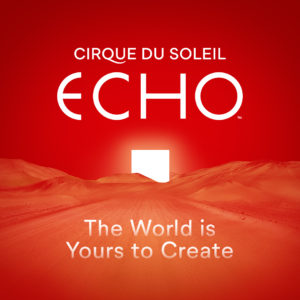 Montreal, October 11th, 2022 – Cirque du Soleil is proud to announce its new Big Top show: ECHO, directed by Mukhtar Omar Sharif Mukhtar, based on the original concept of Es Devlin. Presented by Sun Life Global Investments, the show will premiere under the Big Top in the Old Port of Montreal on April 20th, 2023. Tickets are now on sale exclusively to Cirque Club members and to the public starting on October 17, 2022.

Cirque du Soleil’s 20th Big Top show will bring bold new visuals and a different aesthetic approach. High-level acrobatics will be woven into the fabric of a striking and disruptive visual universe.

“After this summer’s amazing success with KOOZA and now seeing our fans’ anticipation for Corteo at the Bell Center during the holidays, we look forward to launching this new creation and premiering it in our hometown as per our long-time tradition,” commented Stéphane Lefebvre, president and CEO of Cirque du Soleil Group.

“Production on the show had started before the pandemic. Three years have since passed, and we are in a different world now than the one we were in in 2020. This brought us to rethink the intention of the show, to bring innovation to it, and even to revert to Es Devlin’s original proposed title, ECHO, because it fit better with the new storyline. We also invited new people to join the show creation team, including Director Mukhtar Omar Sharif Mukhtar,” says Creation Director Chantal Tremblay.

Director Mukhtar Omar Sharif Mukhtar adds, “Creation should always be at the heart of Cirque du Soleil, and one of our biggest excitements anchors itself in our ability to deliver a new show to our audience. ECHO will push the values of connection and inspiration and the power of intention. We have the ability to create and manifest the world we want to live in, if we all put our collective minds together and encourage a movement that is pushed by the youth of today. What really excites me most about this beautiful project is being able to push the boundaries of what can be achieved in a Big Top setting and deliver a joyful experience, full of surprises, to millions of people around the world.”

The World is Yours to Create.
Cirque du Soleil brings new and surprising twists to its Big Top magic with a story about evolution and the symbiotic unions that our future depends on.
Poetry, stagecraft, daring acrobatics, and technologies come together in a spectacle exploring the precious balance between humanity, animals, and the world we share.
As they navigate the phases of evolution, our main female protagonist Future and our characters learn that their actions have the power to shape the world. Inspired to collaborate, they come together to rebuild our planet, piece by piece, creating the world we all want to live in.
Fueled by the power of invention, the hope of the youth and the importance of empathy, ECHO invites the audience to participate in a universe of color, wonder, and infinite possibilities.

ECHO will be presented under the Big Top in the Old Port of Montreal starting April 20, 2023. Cirque Club members can purchase tickets for these performances online starting today at www.cirquedusoleil.com/ECHO

Cirque du Soleil has redefined how the world views the circus; from small-town talent to a household name. Based in Montreal (Qc), the Canadian organization went on to become a global leader in live entertainment with the creation of world-class immersive and iconic experiences, across 6 continents. Cirque du Soleil connects with audiences by being genuine, human, and inclusive. Privileged to work with artisans from 90 countries to bring their creativity to life on stages around the world, the company aims to make a positive impact on people, communities, and the planet with its most important tools: creativity and art. Over the years, more than 215 million people have been inspired by shows, in over 70 different countries. For more information, visit cirquedusoleil.com

Entrapment To Entertainment: A Celebration of Blacks in American Circus

January 19, 2023 CircusTalkComments Off on Entrapment To Entertainment: A Celebration of Blacks in American Circus

Looking for our next guide animator