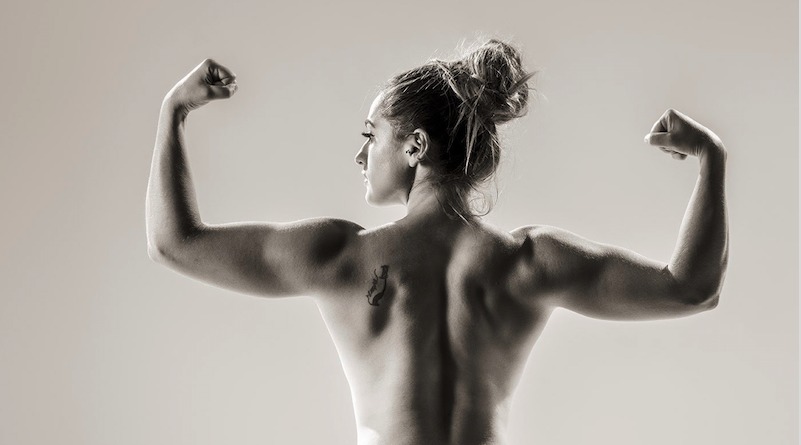 As a child, I was what some would call a tomboy, clad in baggy hand-me-downs while leaping from trees onto trampolines and rubbing my palms bloody on monkey bars. Growing up in the 1990s, I was fed a two-faced tale: I was simultaneously encouraged to cast my aspirations high above me while being repeatedly reminded that my dreams, mannerisms, and actions were “wrong” by consequence of my sex. I cannot remember a time in my childhood that was not coloured by the societal presumption that my femininity was a preexisting condition that rendered me weak.

Circus became a part of my life when I was ten-year-old. My fifth grade teacher was a retired clown who taught me how to juggle fire and quickly became my life raft when doors closed in my face because I, along with half the population, had seemingly lost the genetic lottery. When I was told I couldn’t try out for American football or climb the rope in gym class because I was a girl, I channeled that frustration into perfecting pull ups so I could climb a rope without my legs. I quickly learned that being female didn’t mean my dreams were unachievable, but it certainly meant I would have to work twice as hard to prove I was worthy of a seat at the table.

Susan Leigh Foster posits that women are not less physically capable than men, but that they are socially conditioned to feel less-than and to view the space they occupy within the world as both finite and political (Foster 2009: 69). This political occupation of space is not limited to how and where a female body dares to move in the same way as a male, but what and how that body looks (or is interpreted as looking) while performing the aforementioned activity.

Within the circus industry, this criticism and censorship of female bodies is most starkly noted in the public and critical reception of female aerialists, both within the profession and in extraneous media. One only has to look to pop culture phenomena such as The Greatest Showman or Disney’s Dumbo to see the inclusion of female aerialists shrink wrapped into Hollywood bodies. Even in an age of purported body positivity our projected image of female strength is still expected to inhabit a one-size-fits-all model. When I was a guest artist at the Johnny Carson School of Theatre and Film, one of my male colleagues pulled me aside to ask if I could have a chat with a female student who was a principal aerialist in our production about going on a diet because she’d “become too bulky.” Her upper body had simply developed the musculature that often coincides with hours of aerial training. I declined his request.

Women have had a place in the aerial world from the 1850s, but it would not be until almost a decade after Jules Léotard first introduced the flying trapeze act to society that female aerialists began to join and quickly outnumber their male contemporaries. Despite the domination in their field, female aerialists were consistently sexualised, objectified, and devalued by critics and audience members alike when compared to their male colleagues. Flying trapeze artist Mlle Azella’s 1868 debut in Holborn served to drum up interest in seeing women dare to fly and perform as men did, but woman’s ability and place was continuously questioned and criticised (Stoddart 2000: 171). Aerial bodies were increasingly both feminised and androgenised; critics often cited female aerialists as needing to be smaller and lither than their male counterparts, with “narrow hips and slim buttocks being a necessity as a heavy posterior does not permit a graceful somersault” (Tait 2005: 94). Critics spoke of female aerialists as delicate and soft even when recounting stunts that had previously been performed by male aerialists and described as muscular and athletic. Hughes le Roux and Jules Garnier’s book Acrobats and Mountebanks describes female equilibrists as “delicate and graceful”, simultaneously arguing that women were better suited for such endeavours because of their natural grace (a quality, they argued, males lacked) while also stating that equilibrists must be muscular and athletic (while tactically avoiding the use of such terminology in direct relation to the circus women they were recounting), descriptors generally reserved for men (Stoddart 2000: 170). This gendered recounting of female performers does not serve the advancement of circus women; instead, it prettifies the performance, reducing it to pure aesthetics while ignoring the sheer athleticism and muscularity required to safely, effectively, and consistently perform the act (2000: 170).

Aerial bodies were increasingly both feminised and androgenised

This focus on aesthetics has put the physical requirements of female aerialists (developed upper body musculature) at odds with sociological expectations of what it is to be ‘feminine.’ Circus, for all of its boasts of being a counter-cultural ecosystem, followed the same rules of ‘regular’ society, with males dominating the forefront of the field and females being reserved largely for decorative purposes (Tait 2005: 95). Circus women who defied these traditions and built on musculature and dared to perform as men were often unsexed, referred to as mannish and unwomanly. Renowned flying trapeze catcher Juan Vazquez recounted in 2003 that all the female [flying trapeze] catchers he had seen perform “look more like a man” (2005: 95). By daring to embrace the physical changes their bodies inevitably undertook these women were actively disrupting the socio-political view of the female body as passive, weak, and delicate, existing for the sole purpose of bearing children and maintaining a home (Gils 2013: 2). These disruptive actions were only met with positive reception when the performer alluded to their physical prowess as being natural rather than developed musculature from rigorous physical training. Circus women were often regarded as nigh mythic with their physically developed bodies, whereas their male counterparts were acknowledged for having put in great effort to develop their bodies to their peak physical potential (Tait 2008: 181).

Hungarian trapeze artist Adelina Antonio bragged in an 1895 interview about the size of her biceps, proudly stating that they were thirteen inches in circumference. This prideful nature surrounding her physique was not unique to Adelina; many female aerialists expressed pleasure in their own muscularity, sentiments that were in direct odds with the Victorian expectations of womanliness (2008: 181). This rebellion against traditional ‘femininity’, an act itself performative in nature, contributed to the oft described androgynous nature of aerial bodies. Naomi Ritter compares Thomas Mann and Jean Cocteau’s views on androgynous aerial bodies in her article  Art and androgyny: the aerialist, positing that “while the two writers might interpret the androgynous muscular nature of the aerialist differently, the very act of androgyny and rebellion of both femininity and masculinity conjured up similar sexual fantasies in the two viewers (Ritter 1989: 139).” This hyper-sexualised intrigue surrounding muscular, androgynous yet ultimately female-identified aerial bodies led to confusion, subversion, and transgression of traditional gender roles, with the female aerialist being seen as existing in the ‘in-between’ of what society expected a female body to be versus its peak physical potential (Gils 2013: 9).

Female aerialists such as Charmion and Adelina, both unapologetic about their muscularity, were accepted by audiences and society as a whole on the condition that muscular bodies of females did not become popular outside of the big top (2013: 42). Charmion’s trapeze disrobing act in particular was received without much fear of threat to traditional gender order because her highly developed muscular upper body bore an association with the working class and thus did not pose a threat for high society women to be influenced to figuratively take up arms (2013: 88). In the outside world, the scientific community was still rife with misinformation, with muscular women being described as mannish, a “liminal third sex, neither male nor female.” American President Theodore Roosevelt claimed that American society could not progress if the bodies of the sexes began to mirror and replicate one another. President Roosevelt boldly claimed: “When men fear work or fear righteous war, when women fear motherhood, they tremble on the brink of doom; and well it is that they should vanish from the earth” (Davis 2016: 181). These staunch responses to the athleticism and muscularity of the New Woman transform the role of the female aerialist into one of subversion, capable of disrupting and upsetting social expectations and bias surrounding what a female body ‘should’, ‘could’, and ‘can’ do.

Throughout the course of circus history, female aerialists have been subjected to highly sexualised, sexist, and objectifying rhetoric and constraints. The hyper-fetishized androgynous a-gendering of female (and at times, ‘feminine’ male) bodies within the greater circus profession has served as a proponent for ‘scientifically’ inaccurate arguments for what the female body is capable of within the world of aerial sport. Western stereotypes surrounding femininity and the Otherness of woman have helped fuel a biologically-inaccurate narrative of female bodies being inferior, weak, and fragile in comparison to their male counterparts. By playing into this misaligned concept of inherent female weakness, woman is by default ostracised, and any woman wishing to move in the same fashion as man is categorically a coloniser, a threat, inherently alien by the nature of her sex, rather than a colleague, a contributor, an explorer in the great expedition to discover the physiological boundaries of the human body. To pave the way forward for the next generation we must look to our history and embrace the challenge of evolution. By honouring the legacy and the strife of women such as Adalina Antonio and her unapologetic love of her muscularity and aerial excellence we lay the framework for an industry that is equitable and egalitarian. Model, Writer. Movement Director, Circus Artist -United States
Morgan Barbour is a model, writer, movement director, and circus artist. Her work has been featured in publications such as Insider, GenderIT, Al Jazeera English, The Journal.ie, Circus Talk, and HuffPost. She has been a vocal advocate for victims of sexual and domestic abuse and has publicly criticized the legal system's handling of such cases in the United States, United Kingdom, and the Republic of Ireland. Her European debut play, By the Bi, was recognized by Amnesty International UK as a production inspiring audiences to think about human rights. She is a former professor at University of Nebraska-Lincoln and a visiting special lecturer at Central St Martins.
Morgan's profile
You are about to enter a members-only zone.
To share this article on your CircusTalk member page and connect with circus professionals from all over the world, sign up now. It's free!
Sign Up
Already have an account?
Log in

Morgan Barbour is a model, writer, movement director, and circus artist. Her work has been featured in publications such as Insider, GenderIT, Al Jazeera English, The Journal.ie, Circus Talk, and HuffPost. She has been a vocal advocate for victims of sexual and domestic abuse and has publicly criticized the legal system's handling of such cases in the United States, United Kingdom, and the Republic of Ireland. Her European debut play, By the Bi, was recognized by Amnesty International UK as a production inspiring audiences to think about human rights. She is a former professor at University of Nebraska-Lincoln and a visiting special lecturer at Central St Martins.