PLAY it again! With Play, a guest performance series of contemporary circus set for 2023, the Chamäleon presents the complex diversity of modern artistry and acrobatics.

Ten companies, six weeks, one location. The Chamäleon‘s guest performance series Play presents current interpretations of contemporary circus that reflect both its complexity and its joyful experimentation. The Chamäleon Theatre in the Hackesche Höfe thus becomes a stage for unconventional or as yet underrepresented artistic positions by regional and international artists. “Contemporary circus can neither be clearly delimited aesthetically nor in terms of content, so it takes many encounters to understand this fluid and constantly evolving art form,” says Anke Politz, artistic director of the Chamäleon. “To this end, we have created supporting programmes alongside the shows to invite discussion. This will allow people to experience directly and up close what they love about the Chamäleon: exciting pieces, authentic stage moments, open, accessible encounters, and the latest circus perspectives.”

The idea for Play came about at the beginning of the pandemic. However, the guest performance series had to be cancelled in its first two years. “Nevertheless, it‘s become an absolute project of the heart,” says Anke Politz, because the concept of “establishing a reliable platform, especially for the many smaller companies and individual artists” is more important than ever. And so Play will become a permanent feature of future programming at the Chamäleon.

The 2023 season will present a major highlight right from the start. The renowned Australian
troupe Gravity & Other Myths, which has been “a company in residence” at the Chamäleon
for four months in 2022, performing two productions, including a world premiere, will show their debut work “A Simple Space” at the end of their Berlin residency and as a prelude to
the guest performance series Play. This multi-award-winning production from 2014 is one of the milestones of New Circus. As well, the charity gala by the inclusive Circus Sonnenstich will hold a special place within the Play guest performance series. The gala will be held at the Chamäleon for the ninth time. With the new edition of the successful show “Karak – Visions,” the company will celebrate the 25th anniversary of the ZBK – Zentrum für bewegte Kunst in 2023. A total of ten companies with artists from seven countries will present their particularly striking performances from January 3 to February 12, 2023. They are all united by the courage to experiment and mix traditional circus arts such as acrobatics or juggling with other genres, including contemporary dance, puppetry, object manipulation, and martial arts. Thus, with Play – a guest performance series of contemporary circus, the Chamäleon shows in detail and without clichés what contemporary circus means to them. 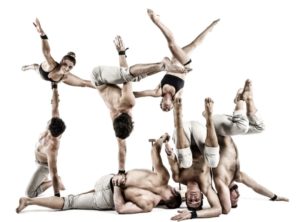 In “A Simple Space,” the acrobats challenge each other to a playful competition. The focus here lies on blind trust and friendship between the seven performers. The company also highlights their trust of the audience by letting the stage extend far into the auditorium. No movement, no breath, no twitch of a muscle, no effort and no smile stays hidden. Accompanied by live percussion, they create a very intimate but also warm and cheerful atmosphere that touches everyone. 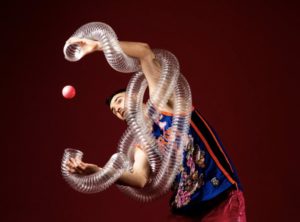 In “Rollercoaster,” Wes Peden explores ups and downs. For the juggler, who is currently regarded as one of the world‘s best, both fast rides and juggling tricks have much to do with gravity and momentum. For this show, the artist was inspired by the sounds and the high-tech belts of modern roller coaster trains. And when he performs loops, helixes and corkscrews with the balls, it takes your breath away, just like a rollercoaster ride. The brilliant performance is driven by the longing for freedom, joy, and security. But it is also a tribute to the old big rides. This solo piece was co-produced by the company Gandini Juggling. 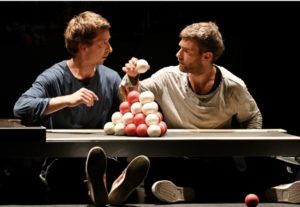 In “Runners,” two jugglers on a treadmill and a musician – who juggles sounds and tones – demonstrate how similar running and juggling are. Automatism and responsiveness, adrenaline and stress, pleasure and fear are inherent in both activities. The company Hippana.Maleta uses juggling, manipulation and the body as a basis to explore aspects of the human condition. The artists deal with the real and perceived speed of time. In doing so, they look at the evolution of the human gait as well as the capacity to pitch in an increasingly immobile culture. Treadmills on stage expand perception and experience of speed, both in walking and juggling. The production was funded by Zirkus ON, the initiative programme for the promotion of contemporary circus productions in Germany, in 2021. 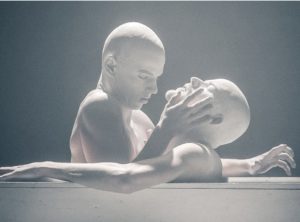 “WIR WOLLEN NIE NIE NIE” tells the story of two inseparable bodies stranded in a cold world. Aerial acrobatics, puppetry, physical theatre and dance merge into an experimental and in parts abstract performance that impressively illustrates the range of New Circus. When the two artists breathe life into a puppet on stage, the performance reaches its emotional climax and vividly shows the artistic possibilities of New Circus. The young Berlin company is characterised by its very individual, innovative style. The foundations for this piece were laid in 2019 in the Chamäleon’s rehearsal space when the company had a short residency there. 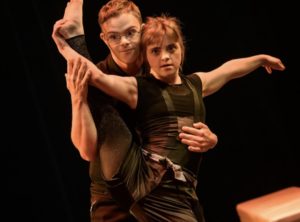 In “KaraK-Visions,” the inclusive company Circus Sonnenstich presents a kaleidoscope of different bodies, forms of expression and artistic skills. The cross-over performance combines acrobatics, diabolo, ball running, hoola hoop and other circus disciplines with dance, theatre and live music. Together with guest artists from Germany and abroad, the artists of Circus Sonnenstich create amazing moments full of humour, poetry and sensuality. 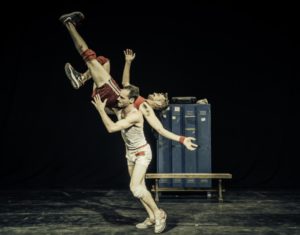 In “Un Poyo Rojo,” acrobatics, dance, martial arts, capoeira and wrestling merge into a story told through bodies. The two performers ironically stage stereotypical macho behaviour in the setting of a changing room, alternating between competition and camaraderie and repeatedly broken up by homoerotic moments. They thereby humorously deconstruct the common notions of masculinity. Since its premiere in 2010, the two-man play has been performed over 2,000 times, including at the Avignon Festival and the Edinburgh Fringe Festival. 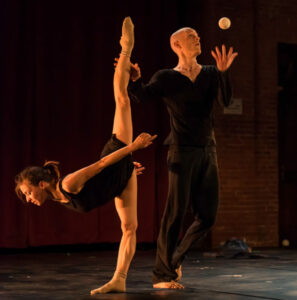 In “Tangram,” Cristiana Casadio and Stefan Sing demonstrate the narrative power that can be found in a wordless and experimentally designed circus show. In his work, juggling artist Stefan Sing strives for symbiosis between the body and the objects in the air. He is not concerned with spectacular aerial architecture, but with an equal interplay between man and balls. He developed the piece “Tangram” with the German-Italian dancer and choreographer Cristiana Casadio, who looks back on a successful career as a rhythmic gymnast (Italian champion in 1993). In their joint performance, the duo combines the means of expression of different art forms to create an exciting dialogue about devotion, control and closeness. 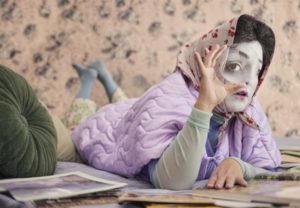 In “Julieta,” clown Gabriela Muñoz tells the story of an aging, cranky woman who has developed a charm all her own through the many experiences of her life. Gabriela Muñoz was inspired to create this evocative portrait by her work in a nursing home and her close relationship with her own grandmother. The result is a funny and moving study of a human life, told by means of physical theatre and clowning. As the title character’s surroundings turn into a hall of mirrors, of memories, she finds ever-new ways to adapt. The first sketches for “Julieta” were made in the rehearsal room of the Chamäleon in spring of 2022. The play celebrated its premiere at the Ruhrfestspiele Recklinghausen. Julieta was created in co-production with Chamäleon Berlin, Ruhrfestspiele Recklinghausen and TOHU Montréal. 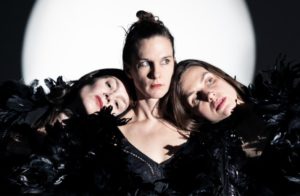 In “Raven,” three performers examine the term “raven mother.” They go through different life situations on stage: Sometimes they mother their offspring like hens, then they focus on their careers and soar through the air like eagles. Using the means of New Circus, they explore aging, the everyday lives of single mothers, and the urge to realise themselves as artists. The acrobatic contortions of their bodies and the balancing acts on the vertical rope become metaphors for a woman’s life between family and career. The play “Raven” was developed by still hungry in 2018 in cooperation with the Chamäleon. It received several awards (The Scotsman Fringe First Award, Three Weeks Edinburgh Award and Shortlisted for the Total Theatre Awards). For the guest performance at the Chamäleon, Cristiana Casadio takes over the part of still hungry founding member Lena Ries and brings her own experiences as an artist and mother into play. 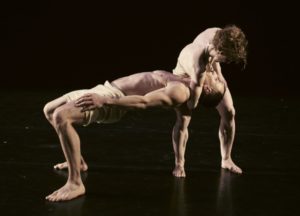 In “Knot,” the British company Nikki & JD creates a sensitive performance focusing on the themes of love, partnership and friendship. Using physical theatre, acrobatics and modern dance, the duo choreographs an intimate and intense man-woman story. The acrobatic couple interweaves individual circus elements so organically that the show does not appear like a series of tricks, but rather a complex narrative. Created in collaboration with award-winning choreographer Ben Duke of Lost Dog Dance Company, the piece won the Total Theatre & Jacksons Lane Award for Circus and the Herald Angel Award in 2019 and was runner-up in the prestigious Carol Tambor Best of Fringe Award.

Protecting Your Energy As A Performer

February 1, 2023 Theater Art LifeComments Off on Protecting Your Energy As A Performer

Protecting your energy as a performer isn’t always a walk in the park. As artists, having enough energy and stamina

London or Brighton, plus remote working and option of international travel, United Kingdom