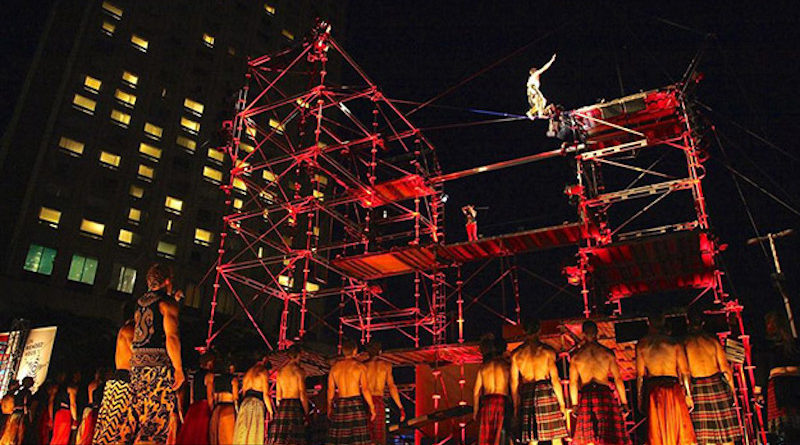 What you may not know is that in among that sea of jazz fans, start-up CEO’s and comedy-goers will be a cadre of circademics, thanks to a determined circus and theater scholar named Dr. Patrick Leroux. This year, he continues with his mission (last summer he and colleagues Karen Fricker and Charles Batson organized a conference) of facilitating more circus exposure for academics by offering up a summer intensive thru Concordia that makes the most of the festivities, the non-stop circus performances, and the access to global industry professionals. Below Dr. Leroux weighs in about the seminar happenings, who should apply and why.

We hear that you are facilitating a seminar with Concordia University this summer about Quebec performing arts with a focus on circus. How did you get the idea to organize such a seminar and when is it?

I have been very much involved in the contemporary circus scene for almost a decade, its place increasing yearly in my consciousness and in my time commitments! It started out of curiosity, given that I come from theatre and was interested in many of the connections happening between theatre and circus in Québec and expanding outside of it as well. This interest kept on growing: first a trip to Vegas to see all of the Cirque du Soleil shows, then an article, then a special scholarly issue, then a full conference devoted to Québec circus, then another, opening up to the world, a scholarly book (Cirque Global; MQUP, 2016), a Working Group on circus research, and ongoing projects at the National Circus School and elsewhere. Concordia now attracts quite a few graduate students working on circus topics from within our interdisciplinary programs (INDI and Humanities). It’s not surprising given that we have established relations with the National Circus School and the important circus companies in Montreal. However, until now, Concordia University had never held an actual class or graduate seminar focusing on contemporary circus. The time was ripe! And judging from the reaction so far, many people had been waiting for such an opportunity.

What areas of study  is the seminar focusing on?

The seminar will be held during Montreal’s 375th anniversary celebrations in balmy July and will run concurrently to Montréal Complètement Cirque festival and its international contemporary circus marketplace featuring industry events, talks, and showcases. In addition to daily lectures, talks and attending every show in the festival, including 7 doigts de la main’s Vice & Vertu…, as well as having a peek at some works in progress and engaging with artists, we will attend large-scale multimedia performances of Daniele Finzi Pasca’s Avudo and Lemieux-Pilon’s Cité mémoire. We’ll have some backstage access to works in progress, possibly auditions, certainly focused and intimate conversations with some major circus practitioners and programmers.

While the theme of the seminar is Québec performing arts and its international impact, because of the timing of the seminar during the circus festival, our focus will be on Québec`s vibrant contemporary circus scene, with a strong historical and theoretical base in theatre, circus, and performance.

Who is this seminar for? Is it open to international students?

This seminar is ideal for any student interested in Canadian Studies, Québec studies, Québec performing arts, contemporary circus, theatre, performance and large-scale video installation, and in cultural discourse and history. (However, another, more theory-based, graduate seminar in “Performative Dramaturgies” will be offered this upcoming fall in the English Department at Concordia on Wednesday afternoons.) This summer seminar will be very intensive, including morning lectures, afternoons guest talks, showcases, participation at the International circus marketplace and evening shows.

What do you hope to accomplish by facilitating this seminar and what do you think the participants will gain from it?

Theatre and Dance have their practitioners and they have their historians and theorists, dramaturgs, teachers, etc. I don’t see why contemporary circus shouldn’t also develop such a width and depth of multiple expertise. This seminar aims to give ample space for thinking, discussing, debating and sharing knowledge and perspectives. It’s not a practical workshop, in the sense that we won’t be doing circus or theatre, but we will be totally immersed in both, in Montreal, during a festival.

Also, the focus really will be on how Quebec, a small, mostly French province, incongruously produced a billion-dollar, international industry with circus and how its theatre, dance, and multimedia scenes also developed into surprising international references for creativity and innovation.

Every weekday, we will have two-hour morning lectures at Concordia, after lunch, we will have afternoon talks, conferences, and showcases at Tohu, in Old Montréal and other sites associated with the international circus showcase, and, finally, evening performances and discussions. Expect an immersive 10 am to 10 pm day. Weekends will be mostly free (to work on assignments and to visit Montréal). The last concluding class, on Monday 17th, will be devoted to in-class oral (academic) presentations by students and concluding remarks.

Students can expect coursework to include regular contributions to the seminar blog, an in-class presentation and a final scholarly essay to submit one week after the last class. A readings list will be sent one month prior to the first day of classes to ensure students are ready as there will be little time to read during seminar.

While this is a graduate seminar (MA and PhD), I am allowing a few select spaces for motivated senior undergrads and independent students (very motivated practitioners, for instance).

How can a person apply?

To apply, please send letter of motivation directly to me. Places are limited and I will have to select participants. I must receive the letters as soon as possible and ideally not after May 1st if the student wants to be considered for financial aid (while modest, we can help with free remissions for certain students in need).

Because it’s Montreal in the summer, during the contemporary circus festival, with bright, excited, like-minded people whose idea of intellectual stimulation and ideal sociability is to immerse themselves in a 10-day marathon of performances, discussions, talks and international networking.

Patrick Leroux is an Associate Professor at Concordia University and the Founding Director of the Montreal Working Group on Circus Research. He holds a strong interest in circus stemming from his practical experience in theatre and scholarly research into discourse and self- representation in Québec Drama. Dr. Leroux has published extensively and given many international talks on contemporary circus, and has worked closely with the Québec circus scene as a researcher, collaborator, and teacher. He is an ongoing Associate Researcher and guest teacher at the National Circus School of Montreal. At the NSC he is currently working alongside students and teachers exploring the various modes of circus narratives and dramaturgical strategies. He has been a Visiting Scholar at Duke University, Charles University (Prague), and will be at France’s Centre national des arts du cirque in March 2017. Louis Patrick Leroux is also a playwright and a director. Recent creative projects have included theatre (False Starts, Se taire, Ludwig & Mae), performative video installation (Milford Haven) and circus (Hamlet on the Wire, and a laboratory exploration with 7 doigts de la main and National Circus School). He is currently involved in many research projects, all-team based, including a Quebec-funded project exploring circus dramaturgy; a Canadian-funded project studying physical literacy, creativity and resilience; and a Canadian-funded historical synthesis and socio-esthetic analysis of Québec theatre.  Recent scholarly collections include Cirque Global: Québec’s Expanding Circus Boundaries, coedited with Charles Batson (McGill-Queen’s UP, 2016), “North-South Circus Circulations” edited issue of Québec Studies (2014) “Le Québec à Las Vegas” edited issue of L’Annuaire théâtral (2010), and Le jeu des positions. Discours du théâtre québécois, coedited with Hervé Guay (Nota Bene, 2014). He is currently working on a book on contemporary circus creators for Routledge with Katie Lavers and Jon Burtt.

Related content: Meanwhile, Backstage…, The Body in Waiting, Circus Summer Seminar in Montreal, What It Means When Circus Artists Take Part in Graduate Research Courses, The More We Learn the Less I Know, A Sequence of Blogs on Expertise and Ethics,  Simple Thoughts , Coffee talk with Maddy and Stacey–Finding the Intersection Between Circus & Dance,and The Male Duo in Circus, Un Poyo Rojo & Chute!