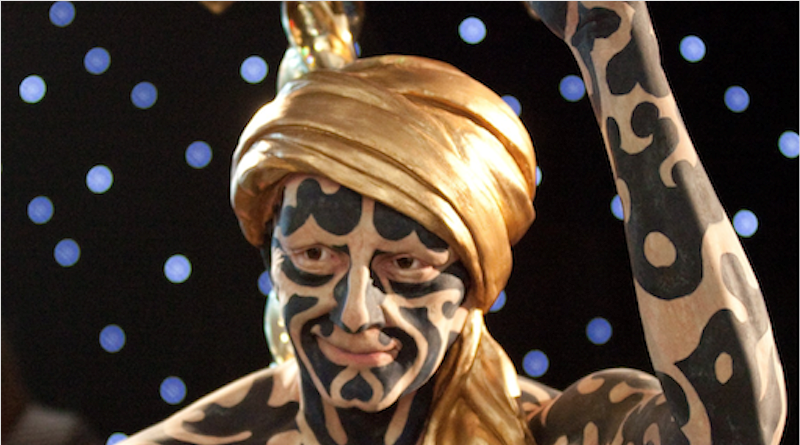 Horace Leonard Ridler (1882-1965) was born in Surrey, South East England. He was the youngest son of an upper-class family with a history of producing civil servants, successful businessmen, officers, gentlemen farmers and school masters for generations. He had a comfortable start in life that offered him a public school education and ample travel. However, Ridler had no interest in academia and instead decided to pursue a career in the military, as it was common amongst men of his social position. With his father’s consent, Ridler joined the army in 1904, but not before taking a grand tour of Europe and North Africa. During his travels, Ridler came across the irresistible lure of the fairground and music halls of Paris and Vienna and the tumblers and jugglers of the bazaars of Africa, which may have awoken an early interest in the world of entertainment and show business.

Back in England, age 22, Ridler took a commission as a 2nd Lieutenant with the 3rd Battalion of the Northamptonshire Regiment, which in those days was formed mainly by gentlemen with their own private income. Ridler remained with the 3rd Battalion until 1906 when he was transferred to The Lincolnshire Regiment, a line infantry regiment of the British Army. Shortly after his transfer, his father died and he came into a sizable inheritance, which he used to fund an overindulgent lifestyle marked by partying and gambling. The ill management of his inheritance combined with a string of poor investment decisions saw his wealth disappear and by 1911 Ridler ran into financial difficulties and was forced to resign his commission after a 7-year career in the army. The next three years in Ridler’s life were marked by the failure to find an alternative profession to his military career and financial hardship.

In 1914, escalating political tensions and power struggles in Europe culminated in the breakoutbreak out of World War I, a conflict that would claim 17 million lives across the globe and will change the world’s political order and the face of Europe forever. Ridler, now 32 years of age and an experienced soldier, voluntarily enlisted in the army with the Westminster Dragoons, a regiment popular with fashionable and rich young men. In spite of his experience, and probably due to his previous dismissal from the army, he started in a low rank as a Staff Sergeant. Ridler was deployed to serve in France in 1916 and allegedly Flanders and Mesopotamia at some point during the war. He achieved recognition for his services in several occasions; in September 1915 he was promoted from Staff Sergeant to 2nd Lieutenant, following which he became a Cavalry Captain in charge of a machine gun company and finally an acting Major in command of a machine gun squadron, a rank which he retained until his retirement from active service at the end of the war.

On being demobilised on 13 August 1920, Ridler moved to London to find himself unemployed and in financial hardship having to survive on a small war veteran’s pension. Amongst other failed ventures, he entered into business with Verney Lionel Danvers (1895-1973). Danvers, a war veteran himself, was the son of a British born electrical engineer residing in Portugal, who had made his way into the Portuguese aristocracy when he was given the title of Baron. Danvers was an artist by trade, famous for the poster designs he produced between 1922 and 1930 for the Underground Group, London County Council Tramways, Shell, LNER, Southern Railway and British Railways, as well as for the fashion house Bobby & Co Ltd. Ridler and Danvers founded ‘The Court School of Commercial Art’ at Lincoln Chambers, Portsmouth Street, London. An advert for the school in The Good Housekeeping magazine issue of 1923 advertised tuition in fancy costume designing for the theatre, fancy dress and carnival. However, soon after, the business got into financial difficulties, and the partnership between Ridler and Danvers was dissolved by mutual agreement on 29 September 1923 with all debts settled by Danvers.

By this point Ridler finding himself in financial difficulties once again, decided to adventure into a sideshow career. He began by exhibiting himself as a tattoo attraction in variety theatres with a few figurative tattoos he had done in London in 1922. It is possible that some of his early tattoos preceded this time and he started acquiring them while in the army or even earlier, as hidden tattoos were common place among the Edwardian elite. All his early work was of poor quality and insufficient to maintain long term interest in his show, thus Ridler struggled to make a living. However, he was determined to make a success of his sideshow career and in 1927 Ridler approached one of the best and most reputable tattoo artists of the time, George ‘Professor’ Burchett (1872-1953).

Burchett’s passion for tattooing started in childhood and by the tender age of 12 he was expelled from school for tattooing his classmates. A year after his exclusion from education, Burchett joined the Royal Navy which gave him the opportunity to travel the world visiting sections of Africa, the Far East and South America. During this time, he came into contact with tattooist from a range of countries, from whom he acquired skills and knowledge which will be very influential in the development of his style and technique. Burchett left the navy in 1896 and worked as a shoe maker, moonlighting at the back of the shop as a tattooist until he opened his first tattoo studio at 438 Mile End Road, London in 1900. He soon became famous amongst the wealthy and upper class and even tattooed European royalty such as King Alfonso XIII of Spain and King Frederick IX of Denmark.

Ridler, wanting to become ‘one of the great human oddities’, longed to have Burchett work on him and requested to have his entire body tattooed, including face and head, with a zebra-like pattern of his own design. At first Burchett refused to do the work fearing that the facial tattoos may turn Ridler into a social outcast, which in turn could have consequences for him and affect his reputation. However, Ridler’s conviction and a written consent to carry out the work eventually persuaded Burchett to undertake one of the most difficult jobs of his career. Burchett spent the next seven years covering Ridler’s entire body, while also covering all traces of earlier work and turning him into the greatest tattoo attraction ever seen. As well as the 150 hours of tattooing and hundreds of millions of needle punctures, Ridler submitted himself to up to 500 separate surgical procedures in his face and head to complete his transformation.

His new, extreme appearance was soon noted by the showmen of the time and in 1934 Bertram Mills signed him to appear at the Olympia in London and tour the music halls of England. His new found success also gained him tours across the main capitals of Europe, under the stage name of ‘The Great Omi’ also known as ‘The Zebra Man’.

Upon his return to England, Ridler noticed that the novelty of his act was wearing off with the public and he would not be able to maintain his audience for long. He was mindful that the success of his career depended on his ability to present an innovative and unique show, never seen before and to achieve this, his physical appearance would need to become more radical. He proceeded to have his ears and septum pierced and stretched to accommodate large-gauge, tribal imitation jewellery, he had his teeth sharpened into points and he started to wear lipstick and nail polish. His costume also became increasingly elaborate and extravagant and he started to sign his autograph as the Barbaric Beauty.

His performance consisted of a double act introduced by his wife Gladys (aka Omette), who he had married in 1925 and followed by Omi’s fantastical account of his metamorphosis into his tattooed form. These elaborate and fictitious tales played heavily on the audience’s lack of knowledge and awareness of other cultures and remote lands, which was a common denominator at the time. A favourite tale reflective of this rhetoric was the claim that Omi had been captured by savages in New Guinea and tortured by tattooing. This practice was common amongst tattoo acts and really boosted Omi’s popularity, turning him into one of the highest paid sideshow performers of his time.

On June 6, 1939, Ridler, now The Great Omi, and his wife Omette arrived at the World’s Fair in Queens, New York, having crossed the Atlantic on the ship Laconia. Twenty-two million people attended the fair, where Omi was appearing at John Hix’s Odditorium, alongside Betty Broadbent aka the Tattooed Venus amongst other famous sideshow performers.

Immediately following the fair, Omi was hired by Robert Ripley to appear on his famous ‘Believe it or Not’ show as the star attraction. Omi stayed with the show for six months, the longest time Ripley ever showcased a single performer. During that period, he appeared more than 1,600 times, often doing up to ten shows a day.

In 1940, Omi toured with the biggest name in American circus and sideshow history; Ringling Brothers and Barnum and Bailey Circus. He appeared as their star sideshow attraction for one season, under the name of ‘Omi the Zebra Man’. He also appeared at Madison Square Garden, the Toronto Exhibition and travelled up and down America several times.

Still in America at the break out of World War II, Omi tried to re-enlist with the British army, but by this time he was a 57-year-old man covered in tattoos and was rejected for active service by the British Consul. Determined to serve his country in any possible way, Omi performed in many shows for British war charities and war camps, boosting morale.

In early 1941, Omi toured both Australia and New Zealand, and spent much of the latter part of the year performing at the beach sideshow Happyland and Bert Lorous Jr.’s ‘World Fair Freaks’ show in Vancouver. He finished 1941 with appearances with the Rubin-Cherry show in San Diego, California.

On his return to England Omi continued to donate his services to the war effort, giving free performances to troops and charity organizations and further supported the allied effort by promoting the sales of war bonds.

He continued to perform until the early 1950s, when he retired to Ripe, Sussex. Omi died in 1965 age 83. During his nearly 30 years of career as a showman, Omi achieved great fame and success, becoming one of the best paid and most famous sideshow performers of his time and working with some of the greatest global names in entertainment, while also serving his country during both world wars.

This article is provided by the National Fairground and Circus Archive, follow this link to discover the collections.