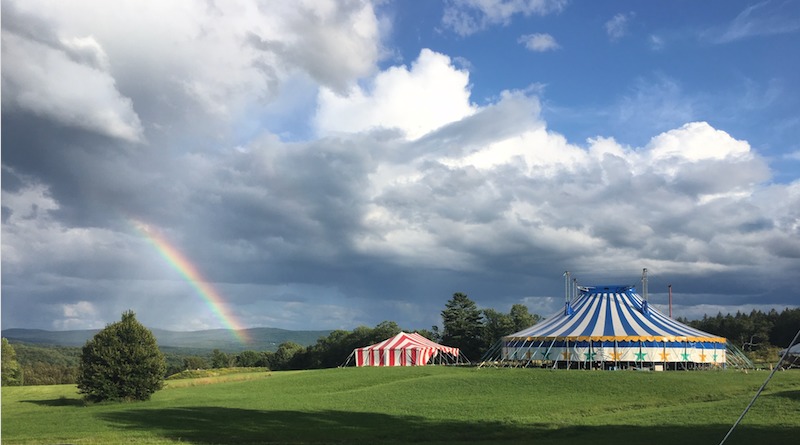 It’s rare that we get the chance to interact with the same institution from many positions. Circus Smirkus camp, the sleep-away summer camp run by the youth circus of Vermont Circus Smirkus, is one of those rare establishments that actively hires former campers to be on staff as coaches and counselors. I have now had the privilege of inhabiting all three of these roles: a camper from 2006-2012, a counselor in 2014 and 2015, and this past season, a coach. I am happy to report back with some good news: while each position offers new challenges, the magic of this place remains the same. Maybe it’s the rolling green hills of North-Eastern Vermont. Maybe it’s the campus of chapiteau’s that seem to hold some secret knowledge. Knowledge passed down from teacher to student over the years, all soaked into the tent’s cupula. Whatever it is that maintains it’s magic, this place has accepted me back into its arms over the years, in all my different forms. Here’s a countdown of five lessons I learned at my home in the hills, under a big-top.

5. Your Comfort Zone is Holding You Back 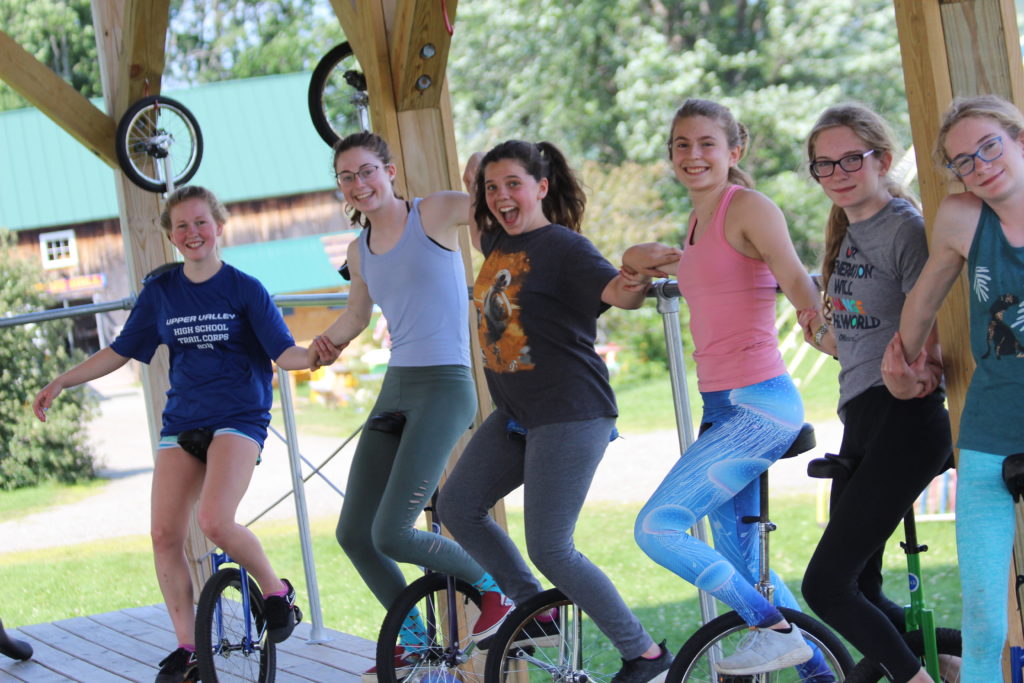 I came to circus with a background in dance. I have a vivid memory of my first year at camp, in acrobatics class. During our warm-up, the coach instructed us to do kicks down the mat with flexed feet. I, a worldly eleven-year-old ballerina, was certain that my coach must be mistaken. How ugly, flexed feet, “Why would I ever?” I thought. So I proceeded to do my prim bâtiments with pointed toes, and was of course instantly corrected by my coach. Now, I could go on and on to my students about how Lu Yi kicks are an effective warm–up and are executed properly with flexed feet. And I meet young Ivy’s who come to Smirkus camp with the same attitude: “At my gym, we do it like this. At my studio, we do it differently. I prefer to do it like this, because that’s how I learned it.”

The beauty of being a student at Smirkus was that over the years, I got to work with so many different coaches with different experiences. This helped me to understand that if my coaches each ask me to slightly change my cartwheel, there is likely a grain of truth in each method, and I can eventually find my perfect cartwheel therein. This richness of experience would not have been available to me if I had decided to stay within the realm of what I knew.

4.Eat Balanced Meals, Take a Shower, and Go to Bed on Time 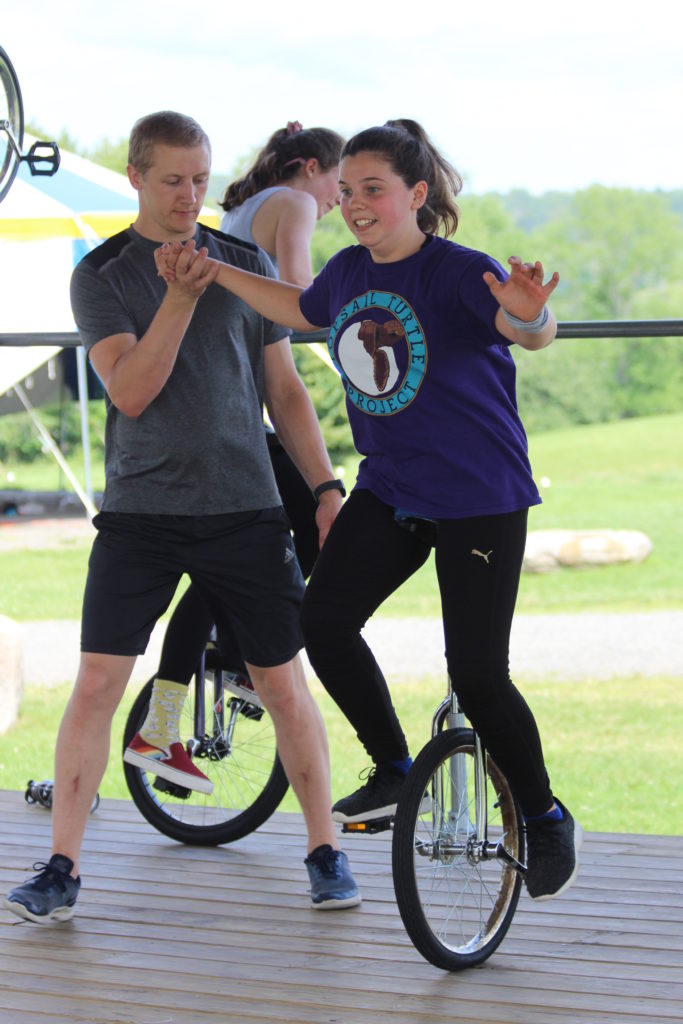 Anyone who has worked at or attended Smirkus Camp can tell you about it’s expansive list of rules and guidelines for the campers. I don’t take a ton of pleasure in negotiating with 15-year-olds about getting vegetables on their plates when seconds are called at dinner, but I do believe firmly in the culture that these community rules establish: in circus, especially when it’s a full-time practice, taking care of yourself comes before all else. From making sure your diet supports your acrobatics or juggling, to personal hygiene (yes, campers are required to shower to once a day, every day, and to wear clean socks), to reporting all injuries to the camp nurse and coaches, to trying to fall asleep when its time for lights out. These are the basics. Without them, we really don’t go that far.

And if I may address my campers directly: I know you’re sixteen and 9:30 seems like a ridiculous time to go to bed. Especially with this strenuous work/ sleep schedule your high school likely has you on. But I, Ivy Blake, a student in a full-time circus school, go to bed at that exact same time. Every night. So, there! Full circle. 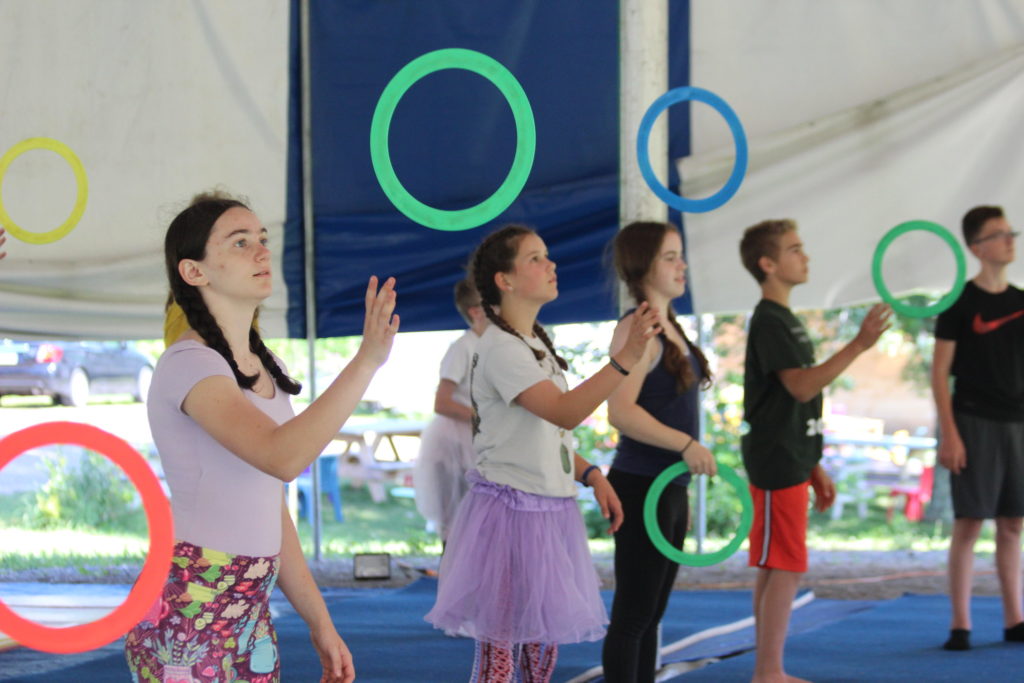 Smirkus, and especially Smirkus Camp, has changed enormously in the 13 years since I first started attending. The number of campers per session has increased, we’ve changed campuses four times (and have finally arrived at our own property and facilities!), and each new camp director has imparted a new energy and way of doing things. And yet some traditions have stayed exactly the same. Every evening, there is a different dress-up theme for dinner. There is an activity every afternoon after circus classes and every evening after dinner, and some have been in rotation since my days: kickball, staff-hunt, gold-rush, ‘tagnificence’, capture the flag, movie night, zombie apocalypse, and of course the dance on the final night of the camp session. These beautiful, ridiculous, nonsensical, fun traditions and games are what makes us who we are. Smirkus camp will not go up in smoke if we stopped observing these codes, but we would lose a part of our culture. In order to stay alive as an institution, we have had to adapt to change. This is natural and healthy, and proof of our resilience. But we also have a strong sense of who we are, what we value, and why we do what we do. To me, this is such a good example of circus culture on a small scale. To adapt is to survive. To stubbornly sing the same songs and play the same games year after year is also to survive.

2.Everyone Belongs, Especially You All 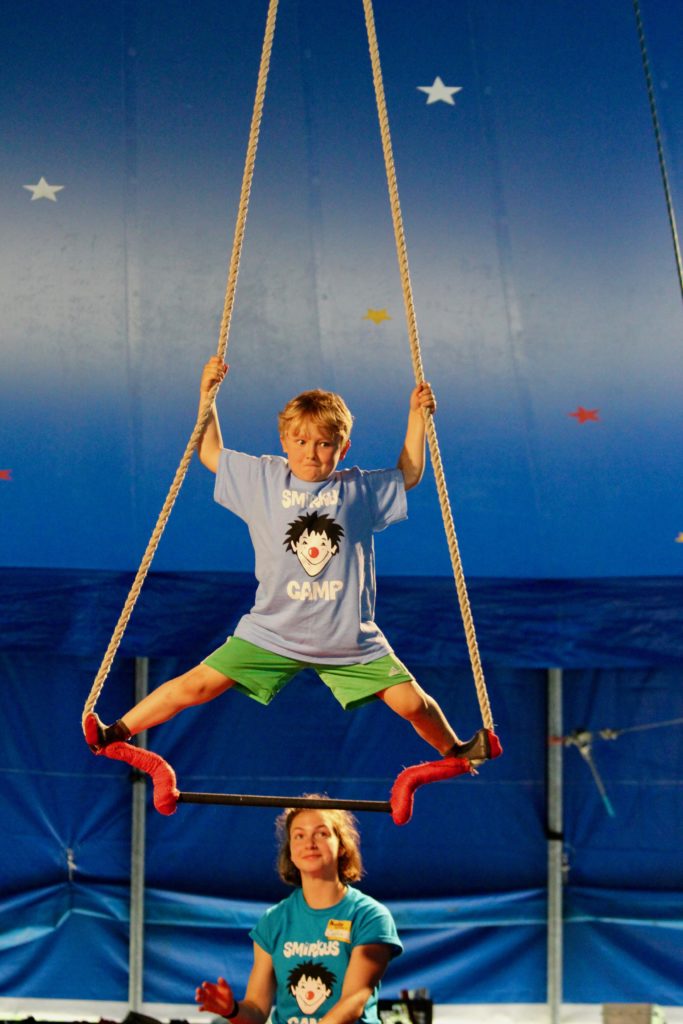 Let me tell you about my very dear friend Mariah. Mariah, who used to be a camper with me, is now the activities coordinator as Smirkus camp. She picks the dinner dress up themes and all the activities, and fully participates in every single one. At the dinner themed “Showers vs. Baths,” she brought a large clear plastic bin into the dining hall, covered the inside in blue cloth, wore a shower cap and a beige t shirt and leggings. She, in her “bath” with a rubber ducky and handled scrub, insisted she was “indecent” and couldn’t leave the tub, and politely requested a camper get her food for her. Mariah stayed in her tub the whole evening. Mariah sings show tunes at full voice, just because. Mariah buys 20 pints of Ben and Jerry’s, keeps them in the staff fridge, and will share with any colleague, so long as they ask her first and she is there to share the ice cream with them. Mariah accepts people unconditionally, so long as they are kind. Friends like Mariah, and this culture at Smirkus, are initially why I wanted to do circus for the rest of my life.

The social culture at Smirkus helped me forge friendships that have lasted over a decade, and has strongly informed how I view social dynamics within circus. Smirkus’s view on campers and staff is this: you inherently belong here, no questions asked, up until the second that you intend to harm other people. And even then, rather than banish you, we’d rather you just cut it out. I once had a circus teacher tell me an old saying from tour life: “you get along, or you get along.”

Your time at camp must be guided by respect. You don’t even have to like the people around you all that much, but you have no option but to respect them.

This is the number one rule that campers must live by: respect for each other, for the equipment, the facilities, and most of all themselves. Respect is then followed by compassion, for the kid next to them who’s having a hard time, and for themselves as they train, play, and grow. Without this, you, or I, really won’t learn anything in my circus classes. And together, we really won’t go that far.

I have a confession to make. I’m not sure I really have mastered these lessons Smirkus taught me. I still find myself in the middle of acrobatics class having very little respect or compassion for myself as I struggle with a trick. I sometimes don’t eat my vegetables or get enough sleep. Sometimes my coaches propose an exercise that I don’t see the point in at all and I so desperately want to say something. So maybe I still have a lot to learn and would do well to remember my campers more often.

I have another confession to make. When I started circus at 11, I really didn’t like training that much. It was hard, the tricks were scary, and I didn’t like feeling weak. But I knew I wanted to be on stage. And I knew I wanted to spend the rest of my days with the people that I met at camp: they worked hard, they sought joy, they shared everything with each other, and they accepted each other with grace. Little by little, I found my place in the circus, found my body’s rhythm, and even learned to like pushing the limits of my strength and ability. But I am so indebted to Smirkus for that first summer of magic, and the many that followed, for feeding a fire in my belly and letting me know that there, I have a home. Wire Walker, Dancer, Acrobat -United States
Ivy Blake is an American wire walker, dancer, and acrobat from New England. With a background in ballet, modern, ballroom, and swing dance, she is a graduate of the professional preparatory program at the School of Acrobatics and New Circus Arts (SANCA, Seattle) and of the full-time training program at ALOFT Circus Arts in Chicago. Ivy is a current student at ARC EN CIRQUE is Chambéry, France, where she specializes in tight-wire and group acrobatics. She is committed to creating a more just world through her art.
You are about to enter a members-only zone.
To share this article on your CircusTalk member page and connect with circus professionals from all over the world, sign up now. It's free!
Sign Up
Already have an account?
Log in

Ivy Blake is an American wire walker, dancer, and acrobat from New England. With a background in ballet, modern, ballroom, and swing dance, she is a graduate of the professional preparatory program at the School of Acrobatics and New Circus Arts (SANCA, Seattle) and of the full-time training program at ALOFT Circus Arts in Chicago. Ivy is a current student at ARC EN CIRQUE is Chambéry, France, where she specializes in tight-wire and group acrobatics. She is committed to creating a more just world through her art.