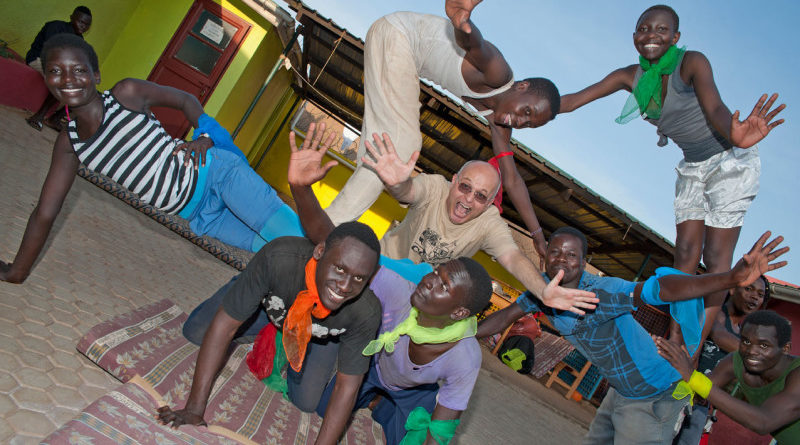 What do a dental technician and a social circus program have in common? They’re working together to bring smiles to children in slums, refugee camps, and orphanages in Kampala, Uganda.

When Giacomo Babaglioni introduces himself to strangers, “I tell them that I am a smile expert because of my profession. As a dental technician, I am able to give back people smile-building dentures, braces, crowns, and bridges.” A native of Italy, Babaglioni moved to Africa in the 1990s, where he trained dental technicians in Ethiopia, Ghana, and Malawi. During his first African posting, at a dental training center in the Ethiopian capital of Addis Ababa, he became acquainted with the American Jewish Joint Distribution Committee, an American service organization that helped the Falusha, or black Jews. The program included a youth circus component, and Babaglioni was inspired by what he saw as a new way to bring smiles to children who needed them.

In June, 2010, Babaglioni landed “by chance” in Uganda, where he was selected to work on a UNICEF-sponsored water and sanitation program that used a team of rappers to spread its message to 30 Karamoja schools. After this intervention, Babaglioni stayed, and with the support of various Italian organizations, founded the Carlo De Giorgi Dental Laboratory and Training Center in Mulago Hospital (the biggest hospital in Uganda) in partnership with Makerere University. To create even more smiles, he also founded Hiccup Circus Uganda. Hiccup Circus Uganda performs free shows in refugee camps, schools, youth centers, orphanages, and Kampala slums. Its goal is to provide “psychosocial support to children whilst simultaneously building and enhancing their life skills helping them make informed decisions and communicate effectively” through a “cultural, educational, entertaining, and participative itinerant social circus without animals.” Babaglioni partnered with the established social and educational Rafiki Theater to write the show, which was originally performed by Rafiki actors along with local acrobats, jugglers, clowns, musicians, and stilt walkers.

In 2013, an American volunteer joined Babaglioni’s fledgling program and created a new component, the Kasikonda Youth Circus School. Kasikande means Hiccup in the local language, Luganda. Ayal Prouser, a Clark University college student, had learned to juggle on his own, then trained with I.FLY, Future Stars, and Streb; progressed to performing in the Circus Smirkus touring unit; and taught juggling and acrobatics in the Jewish-Arab Kirkas Galil (Galilee Circus). Babaglioni’s says, “Not only is he a great coach and friend, but he’s also an amazing person with a huge heart.”

Amazing is right. In just six weeks, Prouser established a circus training program that trains slum-dwelling primary and secondary school-aged children in circus arts. All students learn basic physical exercises, stretching, simple acrobatics, clowning, and juggling. More advanced students study aerialism and drama. Classes meet three times a week for a total of about eight hours. When volunteers visit from other countries, the program expands the contact time, even up to as much as 20 hours a week. In addition to training the kids in circus skills, the program, housed by an Italian NGO, Insieme Si Puo, provides snacks and offers showers. The circus students, in turn, create new smiles by performing free shows in local hospital pediatric units. The social circus project aims to use circus arts as “an educational, cognitive, and social action tool, making Hiccup Circus Uganda performances a medium for providing information and incentives arming children with every available weapon for their defense in the face of potential harm.” Given that Uganda’s history has been heavy with conflict and civil war since gaining independence from the British in 1962, the idea of “arming” children with happiness and skills has been met with enthusiastic appreciation. The group is beloved by the more than 7,000 audience members they’ve reached, the Red Cross and other public and non-governmental organizations with whom they’ve partnered, and of course the dozens of youth who have participated in Hiccup programs.

Huge hearts are producing huge smiles, but founder Babaglioni tries to stay realistic about how much circus can accomplish in a country where “too often children are left stranded without basic needs and rights resulting in daily situations of insecurity and distrust between families and communities.” Hiccup Circus Uganda doesn’t just offer kids an escape from rough circumstances; it uses the disarming entertainment value of circus to spread important messages about health and environmental issues, open dialog across generations, build trust, and demonstrate, to a wide audience, that what appears to be impossible is indeed possible.

In fact, the program might do more than suggest a way out of poverty; the original batch of students from the Kasikonde Youth Circus absorbed their studies so thoroughly that they are now employed by Hiccup Circus Uganda, which pays them for their performances and teaching. The troupe presents two to three hour-long shows each month. Around the world, social circus program leaders argue that circus may be uniquely situated to influence attitudes in ways that traditional instruction cannot because circus touches spectators emotions, not just their intellect. The practice of circus skills teaches collaboration, rewards discipline, and may act as a preventive to adolescent distress. Hiccup Circus Uganda believes its youth participants use “their creative talents with passionate voices and exercise to inform other mates and inspire behavior change into communities. It is quite empowering to have their local stories elevated to a wider audience,” or as Babaglioni puts it, “youth in circus are the protagonists, and everyone smiles in the same language!”

The newest volunteer, Aurora Morano from Piccola Scuola di Circo Milan, has introduced an aerial component to the training, and with her help, Hiccup premiered a new production, Talet De Sbrel, in August at Hiccup’s home base and then presented it to an audience of 600 in the Namuwogo slum as part of the International Youth Day 2014 celebration. The title of the show is Italian slang for “will of clear sky.” Babaglioni explains that the expression refers not just to weather but to the state of mind that resembles the crystal clear sky after a storm, when colors are so vivid that far-away mountains seem just steps away and reind you how beautiful it is to be alive in this amazing world.

Talet De Sbrel brought Hiccup’s total reach to 7,000 spectators over its four-year history. The program continues to grow in other ways as well. Kasikonda Youth Circus School is opening to new students, and the directors are exploring options to open their first circus club outside the home base program.

Can circus save Africa? It can make a difference. Babaglioni explains: ” What is circus about? It’s about overcoming fear, it’s about trust, it’s based on non-verbal and verbal communication. It represents an ancient, multicultural international tradition, and its purpose is to make people not only smile but also think. When you see children wrapped by the imagination and wonder, you know exactly what this means.” Hiccup Circus Uganda is looking for volunteer circus instructors to teach basic and advanced circus skills and possibly serve as the company’s artistic director. Food and housing is provided. For more information or to apply, contact Giacomo Babaglioni in Uganda or Ayal Prouser in the United States. Prouser, who received grant funding and ran a successful crowd-funding campaign to support his trip, also offers to help interested parties with grant writing to support their trip.